On a toasty June day, a dozen people sit on the stage of the Plaza Theatre without air conditioning and lighting. Cavernous stillness — emphasized by the shabbiness of the theater’s 800 empty seats — underlies their reason for being here: to save the forlorn venue. Despite the faded glamour, it’s easy to see what had been here 83 years ago.

On Nov. 27, 1936, Palm Springs’ local newspaper announced that “undoubtedly the finest playhouse in any community of this size” was debuting with the world premiere of the George Cukor–directed Camille starring Greta Garbo. The Desert Sun reported not only that “metropolitan newspapers will send their feature writers to cover the event” but also that “the entire [Metro-Goldwyn-Mayer] organization is at the command of manager Earle Strebe for the opening night.”

On the eve of that gala event, the newspaper praised the Mirrophonic sound system that “will be given a most severe test … before the greatest galaxy of stars ever assembled in any theatre at any one performance.”

The Plaza Theatre — with its prominent sign and tucked-back façade on downtown’s main corridor — awaits a similar show of love. It’s been shuttered since The Fabulous Palm Springs Follies ended its 23-year run on May 18, 2014.

“Our greatest gem is sitting there tarnished,” Palm Springs Councilman J.R. Roberts says of the city-owned property. “So much of what we are today links back to the Plaza. When Hollywood came to play, that was their living room.”

AS A PLAZA THEATRE “usherette” from the age of 15 to 18, Barbara Foster made popcorn, sold tickets, picked up cigarette butts, checked bathroom cleanliness, and monitored the goings on of balcony patrons.

“I was crazy in love with the theater,” she says of the venue she first saw on a house-scouting trip with her father in 1942. 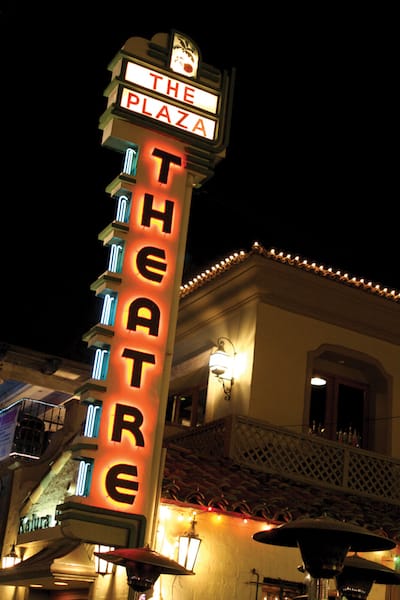 Shuttered since the 2014 closing of The Fabulous Palm Springs Follies, the Plaza Theatre now has a roadmap to restoration.

Foster’s parents left Palm Springs within a year of moving here but allowed her to stay  on the condition she find housing and work to pay for it. After school, she sold clothes at the posh boutique Desmond’s, grabbed dinner at Louise’s Pantry adjacent to the theater, and then ushered at the Plaza.

In addition to film screenings, Foster recalls, “We had many community events there, including Desert Circus Insanities, dance recitals, and Jack Benny radio shows on Sundays when there was no movie playing. They paid me to get high school kids to come and laugh during the [Benny] tapings. The show was always interesting because the writers would bring in whoever was staying at the Racquet Club,” she says, referring to Charlie Farrell’s Hollywood-crowd getaway and adding that she herself performed in an Insanities chorus line.

Foster’s connection to the theater extends to her late husband Bill Foster, a Palm Springs councilman in the late 1970s when a Plaza Theatre lessor demolished its streetside ticket booth (see “The Cast of Players"). In his ire, he pushed for establishing a Historic Site Preservation Board (formed in 1981).

Like Councilman Foster, Roberts’ passion for preservation spurs him to action — in his case, to help breathe new life into the Plaza Theatre.

“I realized the city had no budget [for renovation],” he says. “The only way to do it was to get the city council excited about it and recognize how important it is to our city and our brand.”

The city hired Los Angeles-based design firm Gensler, which found the theater to be structurally sound and estimated restoration to cost
$10 million to $12 million, including a reduction to 674 seats, enclosing the outdoor “lobby,” taking over an abutting office for dressing rooms, and installing new lighting.

“We have a roadmap of what to do,” says Roberts, who co-chairs the steering committee to raise restoration money with Mayor Robert Moon. “I am hoping we can [amass necessary capital] in two years or less.

“We held a public forum, and more than 350 people showed up to tell us they want it restored for community use,” Roberts says. “Ultimately, the city council will decide; my dream is that it has multiple uses.” Concepts floated by the steering committee include live performances, film screenings, and educational lectures and community events.

The committee has designated a variety of naming opportunities as well as 100 founder positions.

Palm Springs Preservation Foundation president Gary Johns presented $50,000 to Roberts for the restoration in June. This month, Modernism Week joined them with a $100,000 donation.

“Any building is more than a two-dimensional façade you drive past,” notes former Palm Springs mayor Will Kleindienst, who leads tours of the Plaza area, including the theater. “If you don’t understand why that structure is relevant, you miss out on its great and significant contribution toward the city’s legacy. I don’t just look at it and see a theater where I could watch movies. For me, it is the whole story.” 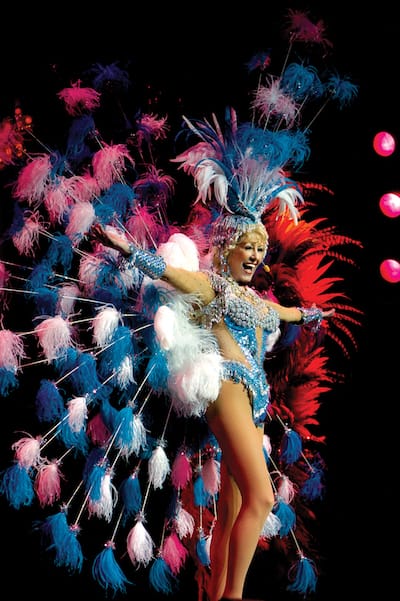 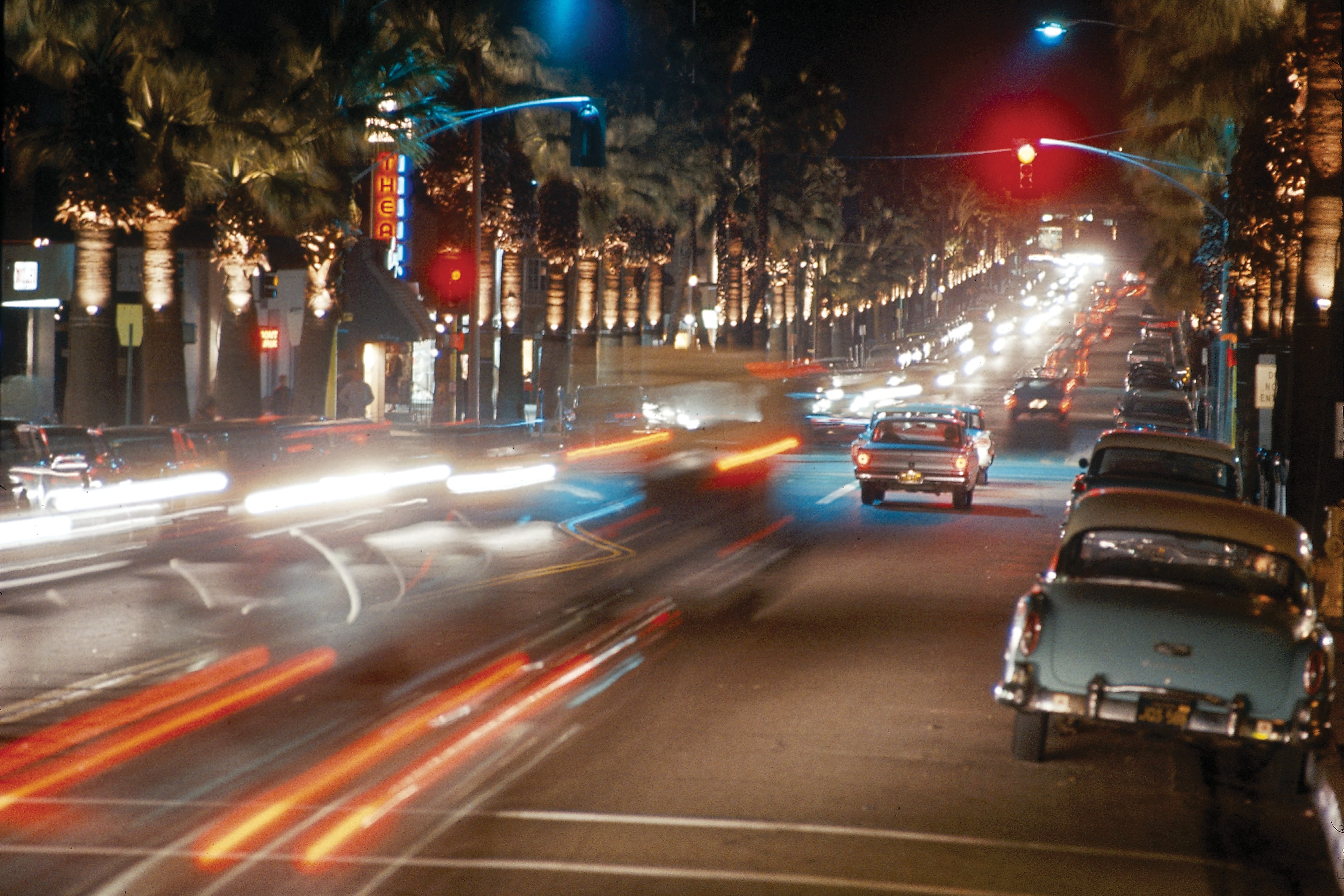 The gem of Palm Canyon Drive could soon enjoy a new life of live performances and film screenings.

“So much of what we are today links back to the Plaza.”

The Cast of Players

After bringing movies to the public in the Frances Stevens School auditorium and opening the Palm Springs and El Paseo theaters, Earle Strebe served as the logical choice to operate the theater component of a $1 million, mixed-use project built in 1936 by National Cash Register Company heiress Julia Carnell. Strebe launched Plaza Theatre with a world premiere attended by Hollywood elite and within a few years added live performances, which grew to include international acts.

“The ladies in evening gowns, the men in tuxedos, spotlights playing in the sky, and the huge throng of spectators at the theatre entrance who came to view the first-nighters carried many a cosmopolitan individual back to gay opening nights on Broadway and caused one to forget for a moment that this is Palm Springs, a desert outpost,” The Desert Sun reported when Ballet Russe de Monte Carlo appeared in 1940. 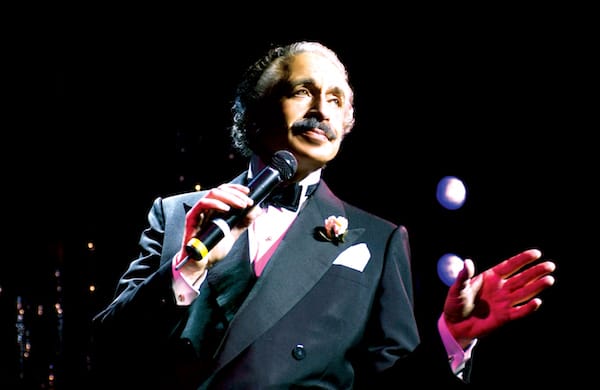 In the early 1950s, Strebe kept the theater open on weekends throughout the summer and installed stereophonic sound equipment and a wide-angle Magnaglow Astrolite screen designed for Cinemascope.

The sands shifted in 1974 when he turned over the leases and operation of his Palm Springs theaters to Century Cinema Circuit, which a year later merged with Metropolitan Theatres. In 1980, the theater caved to the growing competition of cineplexes. Metropolitan split Plaza Theatre into two screening rooms and demolished the sidewalk ticket booth. Eight years later, it offered its lease to the city and donated $200,000 in equipment and cash for restoring the venue to a single auditorium.

On Feb. 25, 1989, The Desert Sun published on its opinion page then–Mayor Sonny Bono’s argument that the city, despite a budget deficit, should renovate the theater to make it available for film and live entertainment. “Our economic priorities are to keep hotel rooms full and keep the central business district alive,” he wrote. “The preservation and restoration of the Plaza Theatre will pay high dividends on both counts.”

Over the next couple of years, the city undertook building improvements and opened the theater in January 1990 for Bono’s pet project, the inaugural Palm Springs International Film Festival.

The following year, the Plaza became home to The Fabulous Palm Springs Follies. Riff Markowitz, freshly retired from a performing and producing career in Canada, showed up to volunteer during spring break, according to Tuck Broick, mayor pro tem at the time. “I got to know his background and said, ‘Riff, we have a theater downtown, and we’ve got to do something with it.’ ”

Despite lack of production resources, Markowitz saw the potential for a vaudeville-style revue.

“He made it happen,” Broick says of the production that garnered international attention and a loyal following. He himself attended the first Follies show in 1991, the last Follies show in 2014, and every New Year’s Eve performance between them. “It brought everything back to life.”

To help save the Plaza Theatre, visit savetheplazatheaterps.com 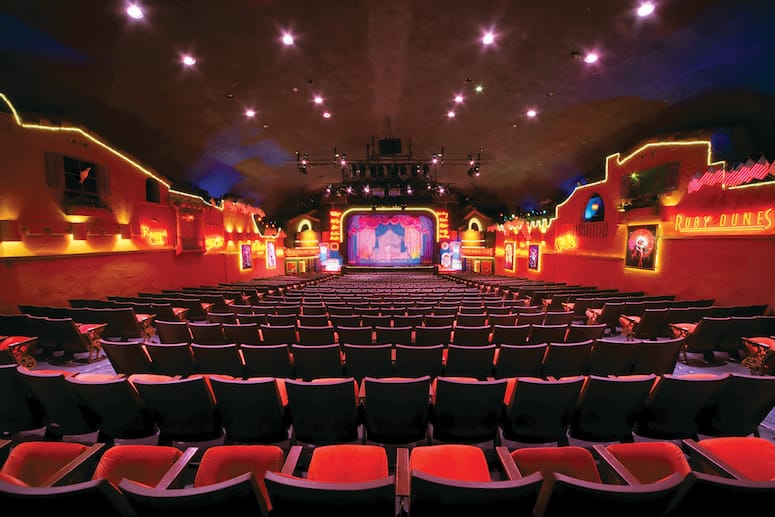 The theater was a star attraction during in the 23-year run of The Fabulous Palm Springs Follies.

Carnell’s heirs (she died in 1944) sell the property to an investor; Plaza Investment Co. purchases it at auction after a bankruptcy filing

City invests in “adaptive reuse” projects at the theater

Per dissolution of redevelopment agencies, city acquires theater for $1

City approves an expenditure of $96,840 for a design and feasibility study 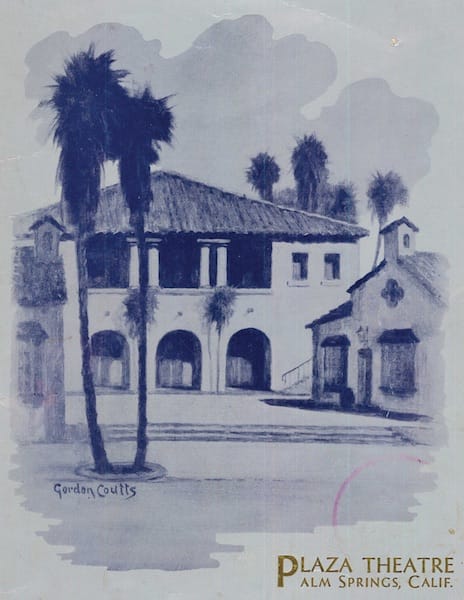 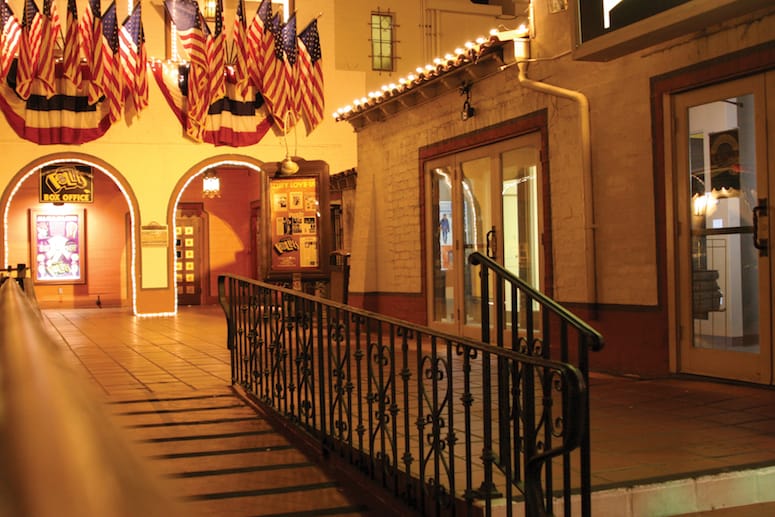 The theater’s Spanish-style architecture inspired other buildings in Palm Springs.

Promotional collateral for the Plaza Theatre includes a “Beauty of Design” description. Here are excerpts:

Architecturally, it is of the modified Spanish type, its general lines according with the other handsome structures which compose the new million-dollar Plaza project. It is conceded to be one of the most remarkable and architecturally interesting of this entire building group which was conceived and designed throughout by gifted Harry J. Williams, member of the architectural firm of Schenck and Williams of Dayton, Ohio and Palm Springs.

… [O]ne enters to see, on either side, garden walls with little Spanish cottages peeping over them. Illuminated by soft lights, the cottages appear to be occupied.

To reproduce the sky, the designers employed soft, gray blue, which, combined with light blue neon lights, gives a lovely twilight color. There is the impression of infinite line, there being no angles in the ceiling. The sky too has its several constellations which are ingeniously reproduced. The illumination is from above and penetrates through tiny openings no larger than the lead of a pencil. This gives the desired impression of extreme heighth. To add to this remarkable effect, some of the stars are on blinkers and fade off and on as do those of the real heavens. Cloud effects may also be obtained by special lighting.

As Mr. Williams explains there is nothing like this theatre in the United States. In one or two places, something similar has been attempted — but there the comparison ends. Palm Springs, by reason of its own distinctive charm, demanded different treatment in its new theatre — and obtained it.

Amid congratulatory ads published in The Desert Sun upon Earle Strebe’s 25th year in theater operations was a copy of this “Inter-Department Correspondence” dated Nov. 1, 1927:

Effective Tuesday next and each Tuesday and Friday night thereafter you are assigned to operation of the portable motion picture projectors in The Desert Inn lounge for showing of films to our guests. If your services are satisfactory, you will receive $1.00 extra for each showing.

Appreciate very much this opportunity; will do my best.

Handwritten note dated 3/25/52 below the above:

Am sure your many friends will be interested in the above memo from our files of 1927. My own congratulations on your great success. However in reviewing the years think my own interests might have been better served if I had operated the projectors and kept you on the bell boy bench. Sincerely, “Uncle” Earl Coffman