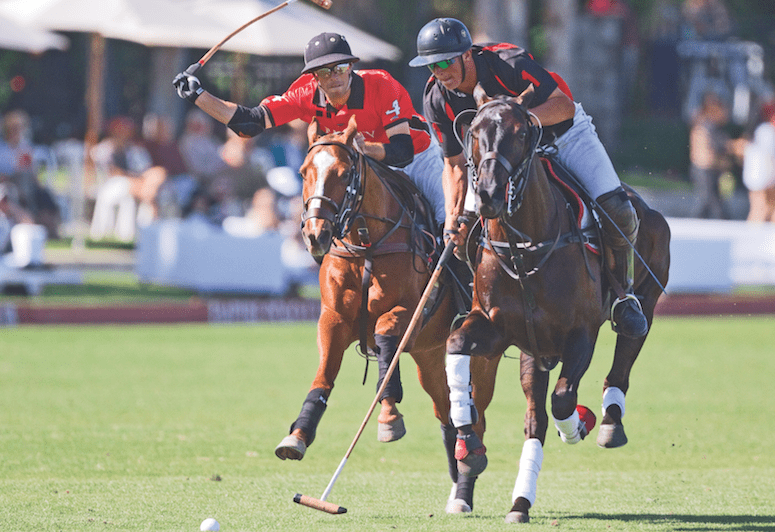 For more than 2,000 years, polo has been regarded as the sport of kings, its privileged patrons as well-bred as their ponies.

“The earth is the ball,” Alexander the Great famously proclaimed, “and I am the stick.”

“Well, Palm Springs sure debunks polo’s high and mighty reputation,” insists Alex Haagen III, owner of the Empire Polo Club in Indio, which, with its neighbor, the Eldorado Polo Club, turns the desert into a world capital of polo each winter. “Everyone is always surprised how down-to-earth and relaxed we are here,” Haagen says, his faded denim, cowboy hat, and dusty boots underlining the point.

Inclusion, not exclusion, defines polo, desert style. With most admissions free, more than 4,000 spectators from every walk of life converge on the local fields each Sunday from January through March. Some hobnob across VIP seats; others tailgate on the pristine lawns. As the ponies pound by, Dodgers caps and Levi’s cutoffs share the fashion scene with Pretty Woman chapeaus and Haspel seersucker suits. And halftime, when everyone frolics together on the playing field, stomping divots and downing drinks, may be the best party in town (until Coachella and Stagecoach invade the same turf in April).

“Come to our Cantina anytime, and you’ll find a microcosm of society,” says Mike Ward, president of Eldorado, himself a veteran player. “Sponsors, riders, and grooms mix with the general public. Everyone is on equal footing.”

Eldorado’s head of marketing, James a’Court, points out that the game itself is very humbling: “A CEO may be all-powerful in the business world,” he says, “but once he mounts his horse, he’s just one of four riders on his team, and usually not the best. Forget status in the heat of action.”

That action may seem more chaotic than coherent. At full gallop, 5 tons of humans and horses chase a 4-ounce white sphere that’s streaking across the grass at 110 miles an hour, man and mount working in synchrony to propel the ball through the uprights at one end of the field while preventing the opposing team from doing the same at the other end, all the while risking catastrophic collision. It’s beauty stride-for-stride with peril.

“Safety for the horse and the player is basic to the rules of polo,” says Kevin Ittig, Empire’s affable field announcer, who tries to clarify those rules for newcomers every Sunday. “Penalties help protect the right of way.”

Eldorado Polo Club field announcer and former player from Calgary Tony Gregg, who has worked the Eldorado mic since 1987, has fielded thousands of fan questions. “I try to educate and entertain at the same time,” he says, carefully explaining the game for neophytes while rat-a-tatting the breakneck action for connoisseurs. “I call polo ‘the great unknown,’” Gregg says, “because the public has so many misconceptions.”

First among those myths: Polo is a polite, high-society game. “People think it’s eight rich guys on horses chasing a ball around,” he says. “Sure, each team might have a sponsor riding a pony, but the other three players are rugged, world-class athletes, paid by the owner to beat other skilled athletes.”

Actually, newbies don’t need to fully understand the rules to enjoy the festivities. Many come for the sheer sensory splendor: the smell of a freshly cut playing field (more than nine times the size of a football gridiron), the cheering crowds, the thunder of ponies, and the colorful regalia of their riders — all framed by a sun-splashed vista of palms, mountains, and sky. Squint your eyes and it’s Monet in motion.

“Plus you can’t beat the people-watching,” adds Tania Luehmann, a new fan from Canada. For her, polo is the hidden secret of the desert. “My visiting girlfriends are amazed by the friendly people and the gorgeous landscape and horses,” she says, “but we really love to check out the crowd.”

Women not only appreciate the sport as spectators but also play it with abandon. Empire and Eldorado aren’t boys-only clubs, and most Sundays they feature rough-and-tumble professional matches between all-female or coed teams.

“Men are certainly stronger,” allows Lynn Bremner, who manages marketing for Empire and is a former player. “But women actually may be better riders, since they usually have had more formal equestrian training.”

Because expert horsemanship was vital to victory, the imperial armies of ancient Asia relied on polo to teach military maneuvers to their mounted warriors, who brandished sabers as the first mallets. When the sport came to America in the 19th century, the army used polo to school the cavalry in the arts of war. Like Teddy Roosevelt himself, some of the Rough Riders were players, and Olympian George Patton rode the polo field with the same fervor he brought to the battlefield.

By the 1920s, Hollywood fell under the sport’s spell, and polo fast became the rage with the stars and moguls. How better to flaunt a fortune than to own a string of gilded ponies — and trailer them to your winter hideaway? Palm Springs’ balmy, arid climate and its vast, flat land lured celebrity polo players from around the world, adding one more fun game to the resort town’s growing portfolio of playgrounds. Led by horseman Walt Disney, visiting Hollywood royalty like Spencer Tracy and Clark Gable likely galloped their ponies on the town’s early, makeshift fields. Polo soon became as iconic to the desert as golf and tennis.

In 1957, a small consortium of players formed a membership club at the original Eldorado Country Club in Indian Wells. By 1979, burgeoning land values forced the polo club to relocate to Indio. Eldorado stood as the premier polo facility in the valley until Haagen III opened the adjoining Empire club in 1987.

Today, the two grounds boast more than 20 practice and championship fields, not only the largest polo complex in America but also the most breathtaking — a glistening desert treasure.

Both clubs’ 13-week seasons begin in January and continue through March. Everyone is welcome — even kings.

Empire Polo Club’s lighted field (one of only two in the world) features polo under the stars every other Friday in season. On March 14, the club hosts the Townsend Cup, a match between arena teams from the United States and England, the Super Bowl of international play. The Skins tournament, beginning March 20, crowns Eldorado Polo Club’s 2015 season. On closing day, March 29, the winning team will ride away with a purse of $24,000 or more. Visit www.eldoradopoloclub.com and www.empirepoloevents.com for more information and match schedules.