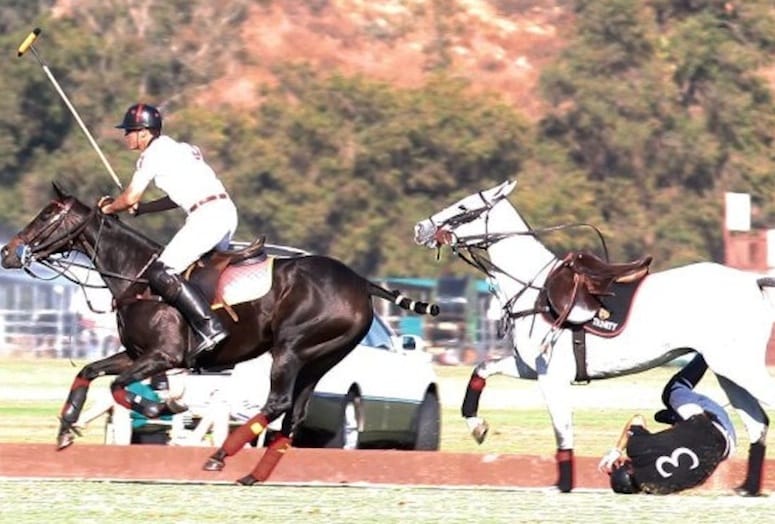 Jared Sheldon describes himself as a “100 percent sports fanatic”.

The San Diego native loves sports of all kinds, playing everything from baseball to basketball and soccer. So it seems rather strange when this SoCal guy says, “I don’t surf. I hate fish and I never want to be around fish of any kind. I avoid the water at all costs, so I’m lucky I have a profession that follows the sun and keeps me dry and on grassy fields.”

Sheldon spends January through March playing in Indio at the El Dorado Polo Club. Opening Day is Jan. 5 with games available to the public at noon and 2 p.m.

Sheldon began playing arena polo with his family when he was only 7 years old. Arena polo is a bit different from field polo, requiring fewer players, a smaller field and less horses. Sheldon learned to love the game and the exhilaration of fierce competitions.

“I like to go fast, and I’m one of those players that is more daring and involved in the game,” he says. “I don’t get nervous. In fact if you get nervous, it’s not the right thing to do. I’ve broken bones and been knocked out. It’s part of the game.”

“I play every game like it’s my last” – Jared Sheldon

Growing up around the seemingly elitist sport of polo, also known as the Game of Kings, Sheldon became enamored and says, “I made it clear that this was what I wanted to do”.

He continued with the sport by working as a groom for friends’ stables and climbing his way up through the ranks. He was given his first pony, Cheeky, who he credits for taking him to where he is today.

A Day in the Life of a Polo Player

Sheldon has been a professional polo player for four years with almost 18 horses in his barn. He owns 14 ponies of his own looking for value, performance, and speed. He currently plays for three teams including Coldwell Banker, Menlo Park; Antelope Polo, Los Angeles, and Team Remax out of Canada.

“I play year-round and all over the nation,” he says. “But this is just the beginning for me. Florida is where the highest level of polo is played in the States. I play 3 goal and I want to improve my livestock and scoring so I can go as far as I can.”