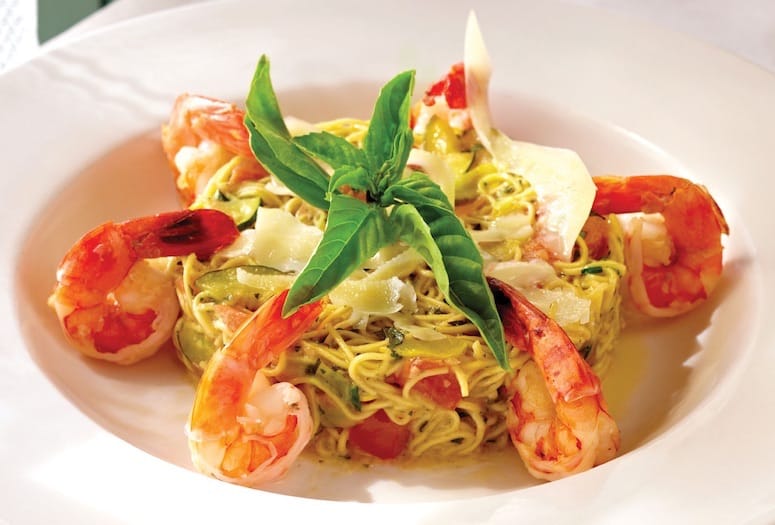 The Tiger shrimp over angel-hair pasta is among the menu items at Pomme Frite in Palm Springs.
PHOTOGRAPHS COURTESY POMME FRITE

Twenty-years ago, J.C. Constant and Nicholas Klontz opened the doors to their new Palm Springs restaurant, Pomme Frite. To celebrate their anniversary, the French/Belgian bistro is going to party like it’s 1999.

This story starts many years ago in a little town called Spa, Belgium. Constant was born there, and it’s where he met the young chef named Klontz. They became fast friends, but life took them each down different paths until 21 years ago when both were looking for a change, and Klontz invited Constant to visit him in Santa Monica. They took a little side trip to Palm Springs, and a year later, Pomme Frite debuted on South Palm Canyon.

“When we opened, he brought his dishes from home, I brought my dishes from home, and we served the people,” says Constant. “That’s how we did it.” Klontz was the chef, while Constant was front of the house. Sadly, Klontz passed away in 2009 after a brief illness.

The quaint and cozy bistro soldiered on under Constant’s sole proprietorship and continues to enthrall patrons with its casual Euro dining style, and its gastronomical delights. For mussel lovers, they serve five tons of mussels a year in 10 different styles from around the globe. From classic Belgian to Greek, Italian and Vietnamese, there are mussels with cream, mussels with curry, and every single one is an adventurous palate pleaser. If you’ve never had them, Constant suggests you start with the classic Marinières, mussels in their own broth with shallots and celery, white wine, and a little garlic. “That’s the best way to taste them,” he says.

If you’re looking for comfort food, Constant is proud of their French Onion soup. It’s so gooey with cheeses, they serve it with a pair of scissors to snip the strings before they land on your chin. Another dish that will warm you up on those cool Palm Springs nights is their beef stew, tender chunks of meat and veggies bursting with flavor. It is not French, in this case it’s Flemish. Constant explains, “Compared to the French Boeuf Bourguignon, instead of being made with red wine, we do it with beer. That’s why we call it French and Belgian cuisine.” 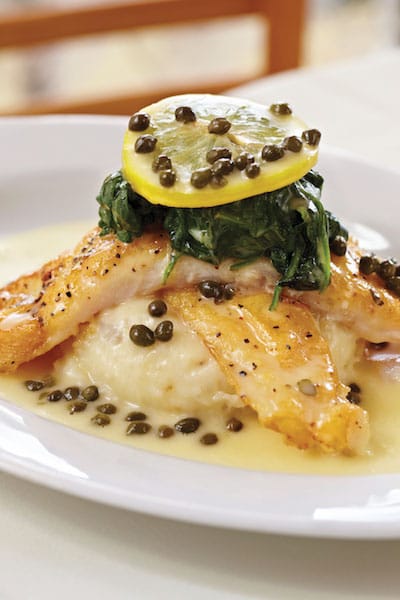 And then there are their famous Pomme Frites, twice fried potato strips to make them extra crispy, served with a variety of dipping sauces. Want some protein with that? Try the Steak Frites. In fact, try everything. Constant is so proud of their menu, when asked what the perfect meal would be, he says, “If I’m not being too pretentious, a perfect meal would be to take anything on the menu and eat it and you’ll love it.”

For dessert, there are an unprecidented 12 items on the menu such as the Gâteau of Belgian Chocolate, a chocolate mousse with pistachio crème anglaise. If you’re a chocolate lover, you know that Belgian chocolates are the best of the best. If you’re not a fan, there are Anjou pears in spiced wine, Grand Marnier Crème Brûlée, and their Floating Island, poached meringues floating on crème anglaise, with caramelized almonds – to name a few.

The bistro itself is like a trip abroad. The mustard-colored walls, accented in forest green, are covered with French poster art, with an adjoining room cleverly designed with exposed brick accents giving it an old-world feel that opens up onto the patio. There is also back room that Constant calls the Cork Room. That’s because half of it is covered in wine corks, 15,000 of them, that Constant designed and built cork by cork. The ambiance whisks you away to a European village bistro where you forget the outside world, and linger with friends and family over a fantastic meal, while drinking good wine, or Belgian beer.

In honor of their 20 years in business Dec, 5, there will be a ribbon cutting by the Chamber of Commerce and small bites will be served from 4:30-5 p.m. When the restaurant officially opens for dinner that evening, all of the prices will revert back to 1999. Then, for 19 more days, one item on the menu will be chosen to wave the celebration’s 1999 banner each day. 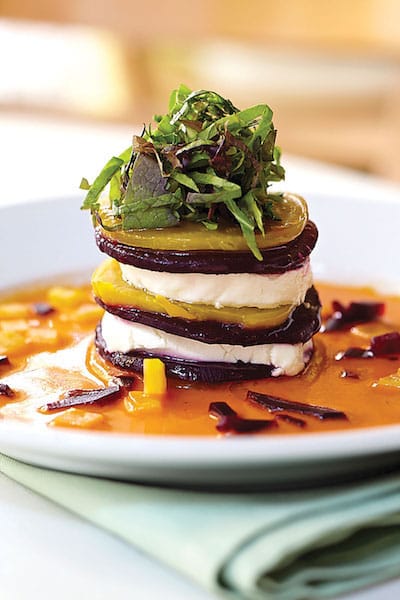 The dining might not be fine, but the ambiance and the food are, as they say en français, absolument fantastique.

A laid back, old-world, Belgium-meets-France bistro featuring mussels prepared 10 different ways, with a wide variety of other dishes a la France and Brussels.

Hours: Dinner starts at 5 p.m., often closed on Tuesdays, but check the website for Happy Hours and possible lunch openings during season.

Parking: Street and behind the building.