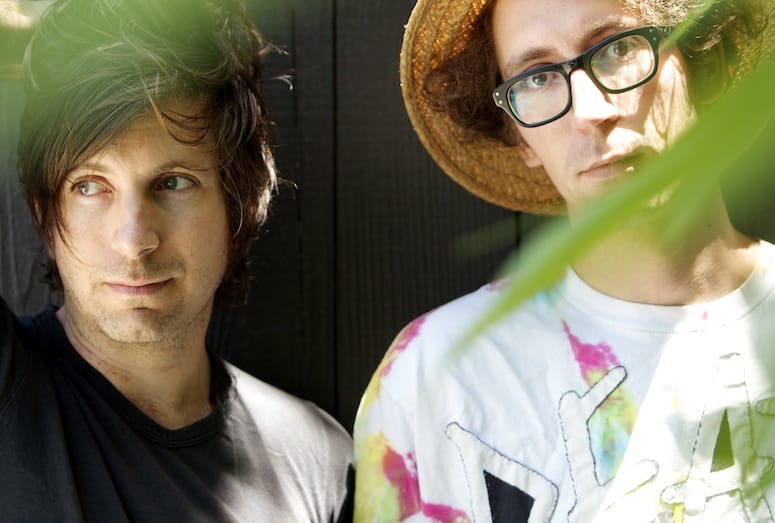 When Poolside’s debut album released in 2012, it ushered in a new genre of electronica that was a soothing alternative to the dubstep sound dominating DJ sets.

With little promotion and no record label, the self-released Pacific Standard Time quickly gained traction, but also received the coveted stamp of approval from Southern California’s tastemaker radio station, KCRW. As the album made nearly every DJ’s top 10 list picks, Poolside earned the adoration of both pedestrian fans and industry influencers.

Fast forward two years and Poolside has found a comfortable niche playing relaxed DJ sets to hipsters and sipsters worldwide. The Poolside duo of Jeffrey Paradise and Filip Nikolic shows no signs of pressure to indulge fans with a quick follow-up album.

Instead, the two focus most of their creative energy DJ’ing and crafting seductive reworks of everyone from Sade to Black Sabbath.

To learn more about the inspiration behind the sounds of Poolside, PSL caught up with Jeffrey leading up to their performance at this weekend’s Splash House music festival, June 13-15, at three Palm Springs locations: Hard Rock Hotel, Saguaro and Hacienda Beach Club. Summertime libations and lazy afternoons come to mind when we think of swimming pools, but this is actually where you make your music?
“The studio we work out of is our friend Anne’s, and that’s actually where I am right now, right in front of the pool.” An interjection of laughter reveals the genuine joy Jeffrey still gets from this idyllic workspace. “It’s this back pool house that has been converted to a music studio. At the time we were playing our songs and slower disco was the theme. It was a really hot weekend, and we were cranking the songs from the studio and going in the pool and we were like ‘hey, this kind of fits… these songs are good for the pool’.

So the pool setting not only inspired your name, but also a genre unto itself?
“Yeah, there was a heatwave that weekend and we were going to pool parties a lot in LA. At the time, dubstep was really catching on and every pool party was pounding dubstep. It was the hot new music at the time so every DJ was playing it, but we were kind of thinking, ‘you know…this not what I want to hear right now.’ That’s what led us to creating our own little sub genre of disco.”

Your cover of Neil Young’s “Harvest Moon” is a great example of how a classic can be masterfully reworked for new audiences. Why did you choose that song?
“I was just listening to his album on the beach one morning and I had just learned Harvest Moon on the guitar, so I thought, ‘why don’t we try that?’.  Before the day was over we were nearly finished and we kind of thought, ‘we’ll just put this out and people will probably dig it’… but we didn’t really expect such a big reception.

You’ve developed a pretty substantial following for your DJ mixes on Soundcloud. What’s the process that goes into these “Mix Tapes”?
“There are some DJ’s that will put out a mix every month and we do like maybe two or three a year. We really take a lot of time to make sure we get songs that are not played out or just the song of the month. We usually do our own edit or at least our own version of a lot of the songs in our mixes and spend a lot of time crafting it to make sure it’s something that in a year’s time you’ll still want to listen to. Then, we just release it on Soundcloud…no alerting bloggers or anything like that."