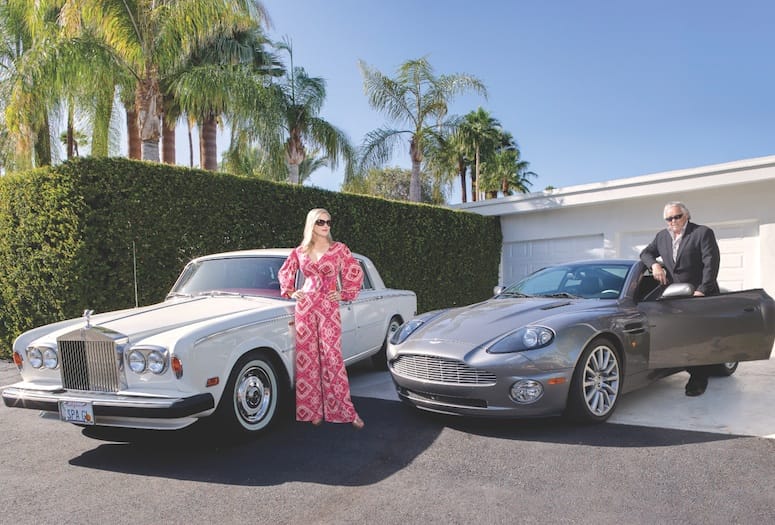 Originally designed as an ornate Italian-style villa, the 1962 house now has a well-balanced fusion of vintage styles, with a decidedly midcentury modern emphasis. The architect remains unknown because the records were lost in a fire at the city’s building department. “We had an architect draw the entire property,” says Chris, adding that Michael Marx had the original building permit for the house. “We have a copy with his name on it.” In the living room, the collaged figure encased in the layered-glass sculpture by Dustin Yellin faces an Andy Burgess painting of the Richard Neutra–designed Kaufmann House in Palm Springs.

They picked the property as much for the neighborhood as the house. “It reminds me of the old neighborhoods, like in Beverly Hills, with the hedges and the gates,” says Karen, who frequented Palm Springs with her family as a teenager, often staying at the Howard Johnson (now the Ace Hotel & Swim Club).

Before moving to town from Dana Point three years ago, the couple regularly stayed at local hotels, including the former Viceroy Palm Springs, and liked to walk around the town’s historic neighborhoods. “We always gravitated to the Las Palmas area,” Chris says. “There’s a lot of privacy. And once we close the gates, it’s like we’re in our own little world.”

The bones of the structure were strong, but the guts needed a wall-to-wall makeover. “The first thing we did was paint the floors white,” Karen says. “It changed everything. Then we took it room by room.” The pool punctuates the original Italian-style design of the residence with classic statuary.

The den, which they call the “British room,” packs Pop art depicting The Beatles and Queen Elizabeth, a custom-made Union Jack carpet, and a pair of 1967 Triumph and BSA motorcycles. A 15-time winner of the Baja 1000 off-road motorcycle race that takes place on Mexico’s Baja California Peninsula, Chris operates an off-road motorcycle tour company that has drawn celebrity clients, as well as the attention of the U.S. Department of Defense, which contracts him to conduct all-terrain vehicle training. He and Karen kept motorcycles in their previous home as well.

The former owner of this house might have used the powder room off the den as an alcohol closet. Chris and Karen left the old alcohol labels stuck to the wall and retained the ornate vanity and sink. They added a mirror from an estate sale in Reno, Nevada, as well as a French door and a chandelier before filling the room with vodka and tequila. Karen Haines had to cut into the ceiling about 6 inches to install John Lennon vs. Elvis, a 9-by-6-foot black-and-white chromogenic print on Dibond and Plexiglas. Artist Alex Cao used thousands of pixels containing Elvis’ image to re-create Bob Gruen’s famous portrait of the late Beatle.

Next, they converted one of the house’s four bedrooms into a fuchsia-clad office for Karen’s fledgling cocktail company and a second bedroom into an acoustically perfect man cave for Chris’ collection of vintage guitars and hi-fi system.

In the hallway between the two former bedrooms, autographed rock ’n’ roll ephemera — album covers, concert programs, and black-and-white photographs by Jim Marshall, Helmut Newton, and Michael Childers — fill every inch of the wall. Heavy on The Beatles, the collection also includes the Rolling Stones, Bob Dylan, The Ramones, and other iconic rockers. In the “British room,” the 1967 BSA Victor stands in front of an enlarged ad for the motorcycle. The Triumph is also a 1967 model.

The dining room reveals the most about the couple. Karen, an interior designer, situated a classic Lucite dining room table and six chairs by Charles Hollis Jones under the concave dome ceiling and embellished a vintage gold and crystal chandelier with silver Christmas tree balls — an idea she gleaned from a store on Abbot Kinney in Venice. Two cast-iron cherub urns, which were in front of the house when the couple bought it three years ago, flank a white antique armoire.

In this social space, attention invariably turns to the built-in bookshelves, which exhibit a small collection of vintage cameras and microphones, rare art books such as Ed Ruscha’s Twentysix Gasoline Stations and first editions like Julia Child’s Mastering the Art of French Cooking, and motorcycle and music reference books, including Beatles Gear: All the Fab Four’s Instruments From Stage to Studio. “I have 80 percent of the guitars in that book,” Chris deadpans. Karen Haines converted one bedroom into a fuchsia-clad office.

Chris started collecting guitars before playing them. “I grew up with rock, and guitars were a big part of it,” he says. “I read that they’re a good investment if you have the right ones. I like to invest in tangible things, so I’m not going to wake up and find I lost 40 percent of my net worth in the stock market. I have 50 guitars in the collection. Almost all of them are players. As time goes by, I get into which Beatle played with which guitar on which songs. These guitars changed the world. This is how it started, right here.”

Among the treasures are Eric Clapton’s 1972 Martin 12-string, the guitar with which he recorded “Let It Grow” on the 461 Ocean Boulevard album, and John Lennon and Paul McCartney’s first guitars from the late 1950s. “They’re not good, but they’re important,” Chris says.

The collection has many of the same guitars and basses played by the Fab Four, as well as a 100th-anniversary Ludwig drum kit in the black oyster pearl finish that Ringo Starr made famous in 1964.

Chris sometimes needs many years to locate and acquire certain instruments. The 1958 Hofner, like John Lennon’s first electric guitar, took almost eight years to find.
The music room had to be acoustically perfect, not only for the instruments but also for the vintage hi-fi system — a McIntosh stereophonic preamplifier — and the Bowers and Wilkins speakers from Abbey Road Studios. He collects and plays only master recordings and significant first pressings on the system.

The audiophile ripped out a bathroom and a closet; closed access to the garden to gain wall space and security; tripled the electrical capacity; built a special shelf to support the weight of the hi-fi system; set up a humidifier and temperature controls; and installed track lights, foam acoustic panels, and thick carpet padding.

Meanwhile, Karen, who designed most of the other interior spaces, spends much of her time in her office, where she runs Spa Girl Cocktails, the Palm Springs–inspired brand she’s launching this summer in California, Nevada, and Arizona. “By end of the second year, it will be national,” she says, noting that her launch team includes Ed Jordan, former CFO and senior vice president of operations at Nolet Spirits U.S.A., the importers of Ketel One. Chris Haines converted a bedroom into an acoustically perfect space to enjoy his vintage hi-fi system and growing collection of classic guitars.

The company has introduced four low-calorie, gluten-free martinis made with natural flavors — cucumber, peach, pear, and apple — and 33-proof vodka distilled six times. They come in clear bottles with a white, midcentury block design and the Spa Girl logo in attractive shades of fuchsia and orange — like her office.

The Art of the Matter The dining room features a Charles Hollis Jones table and chairs and a library of books that includes rare volumes such as Ed Ruscha’s Twentysix Gasoline Stations and a first-edition print of Julia Child’s Mastering the Art of French Cooking.

Karen and Chris share at least two passions: music and art. “We have music playing all the time,” Karen says. “We have speakers in all the rooms.”

And colorful artwork punctuates the entire house, although the pièce de résistance hangs in the wide-open living room: John Lennon vs. Elvis, a 9-by-6-foot black-and-white chromogenic print on Dibond and Plexiglas by Alex Cao. It’s an iconic Bob Gruen portrait of the late Beatle, composed of thousands of pixels containing Elvis’ image. Karen had it installed adjacent to a Henry Steinway–signed Steinway & Sons baby grand piano.

“Our first piece was a French poster by Leonetto Cappiello,” she says, referring to Parapluie-Revel (1922). “We like the history of it, so we had it framed and sent home.”

They recently added a new Dustin Yellin sculpture containing a figurative collage encased in layers of glass. Standing on a concrete plinth at the end of a long Chinese bench-turned-coffee table, the sculpture faces an Andy Burgess painting of the Richard Neutra–designed Kaufmann House in Palm Springs. Incidentally, Karen’s office has a large-scale print of Poolside Glamour, Slim Aarons’ famous 1970 photograph featuring the same house.

Pop art prevails in the collection, which has four Andy Warhol screen prints, including the Paramount Pictures logo and a portrait of Ludwig van Beethoven. Another one, called After the Party, especially appealed to Karen. “I’ve always loved Warhol,” she says. “This one [depicts] Bianca Jagger’s birthday party at Studio 54. I like it because that’s what our house looks like after a party.” The image contains glasses, bottles, plates, and food — a lavish spread that recalls the artist’s “Factory superstars.”

The house has a sense of other growing collections. Chris, for example, treasures his copy of Taschen’s The James Bond Archives and original movie posters for Dr. No, which was made in 1962, the same year the house was built, and Diamonds Are Forever, which was filmed in Palm Springs. Karen collects crystal, china, silver — elements of great tabletop design — that they use every day.

That’s the secret of the interior: It’s all fun and functional. No modernist clichés — only good, practical design.