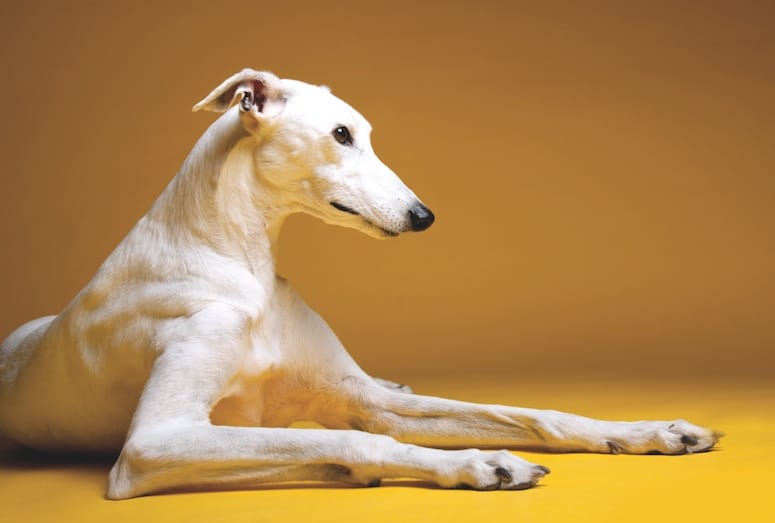 Like all great beauties, Roxie Davenport’s delicate features are even more striking in person than in photographs. After welcoming visitors to Cimarrón Golf Resort with soft kisses, she retires to her father’s office, gracefully folding her long legs into her sleek body and nestling into a fluffy, lavender-colored blanket. Hostess duties complete for the moment, she gently rests her slender, elegant nose on the floor, pink jeweled collar sparkling as she settles in for an afternoon siesta. Ah, the life of a desert socialite.

Just a few short months ago, though, Roxie Davenport was homeless. The 6-year-old white greyhound had been bounced around several homes, left at a shelter, and then sprung by a rescue group. That’s when Malinda Bustos of the Humane Society of the Desert (Orphan Pet Oasis) stepped in to help. Bustos took her in from the rescue group last November and spent three months rehabilitating Roxie and preparing her for adoption.

Roxie’s photograph and story captivated hearts at Palm Springs Life, and she was selected as our cover winner for the Cutest Pet of the Year online contest. This earned Roxie star billing as the magazine’s August cover model and honors for her and dad Paul Jankowski at the Pets on Parade luncheon July 13 at Desert Princess Palm Springs Golf Resort. The annual event raises funds for the Humane Society of the Desert and Pegasus Therapeutic Riding.

“Getting the phone call about Roxie’s winning this contest boggled my mind,” Jankowski says. “We danced around for half an hour. We were just so excited.”

Jankowski, the general manager at Cimarrón in Cathedral City, had been looking to adopt a dog after two elderly English bulldogs he had shared with his ex passed away within days of each other last December.

“I wanted to do a rescue, because it’s truly the best way to get a dog,” he says. “I just wanted a sweet, little, happy, loving dog. I started looking online at all the different rescue shelters. They were all really cute, and I was just waiting for one to jump out and say, ‘I’m the one you want.’ I started scrolling through Orphan Pet Oasis, and there was Roxie. I got on the phone right away and called to see if she was still available. I went down to the Orphan Pet Oasis and walked in the door. She looked up from the sofa she was laying on, got up, walked over, put her nose on my knee, and that was it. That’s how I fell in love with her.”

After undergoing an interview to make sure he was the right fit for Roxie — formerly known as Weezy — Jankowski returned to the Humane Society on Feb. 6 to formally adopt her. “When I walked in again, Roxie jumped off the couch, came over, and started loving on me,” he says. “I filled out my paperwork, she climbed in my car, and we drove home. We’ve been trying to figure each other out ever since. It didn’t take too long.

“The first couple of days, she wasn’t sure where she was or what she was doing,” he continues. “She hates hard, slippery surfaces. She just can’t walk on them. And I have slippery surfaces in my kitchen, my entry, and down my hallway.” Roxie soon went to great lengths to avoid any tile or hardwood. “She discovered that there’s a doggie door in the master bedroom, so I had to leave the front door open so she could go out the front door, out through the patio, through the dog yard, and into the doggie door to get into the bedroom. She kept making this loop, refusing to walk down the hallway. Two days later, I bought runners to put down the hallway, so I could at least get her back to the bedroom. But she’s great with it now.” Roxie even put her newfound mastery of slippery surfaces to  work on the catwalk at  Le Chien, the canine fashion show that’s part of Palm Springs Life’s Fashion Week El Paseo. The annual event raises funds for the Humane Society of the Desert. “It was a thrill to be involved with Le Chien,” he says. “It was an absolute delight.”

Roxie goes to work with Jankowski as frequently as possible — but she still prefers to avoid the resort lobby’s tiled floor.

On the days when Jankowski leaves Roxie behind at their Rancho Mirage home, she’s always there to greet him upon his return. “When I walk in the door, she’s standing there. Her tail’s a-wagging, she starts jumping, and she strikes a pose. It’s the cutest little thing. She puts her butt in the air, puts her paws down, and looks up. It’s her play mode. She does that for maybe a minute, and she’s like, ‘OK, that was fun.’ Then she crawls onto the sofa and goes to sleep.”

Jankowski says that contrary to what many people believe, greyhounds are relaxed. “They do call them 45-mile-an-hour couch potatoes,” he says. “That’s why her last name is Davenport — because ‘davenport’ is an old word for sofa. She’s a couch potato.” And, as befits a budding diva, he adds, “Getting her out of bed in the morning is a task. She does take over the bed, so I get what’s left over.”

The pair walk twice daily, and Roxie has made several friends in her new neighborhood. “I think the biggest surprise is the fact that she is just such a love. I have never met a dog that’s so mellow. She has not a mean bone in her body. She loves everybody. She plays with the ducks, big dogs, small dogs, and cats. She’s been such a perfect little lady. She’s so well-mannered that I don’t have to worry about her. But she’s always on a leash — I don’t want that unguarded moment.”

Although Roxie is healthy, she does have arthritis in her front right leg and is having dental work done, he says. He supervises her activity level and has consulted two veterinarians for a treatment plan that includes glucosamine and chondroitin supplements.

“I would call her a diva, truly, but she does have her playful moments. She’s really a happy dog. She’s finally relaxing, knowing that this isn’t a temporary situation, because apparently she’s been bounced around through a lot of homes. I can’t imagine how and why. She sticks like glue to me. Every time I get up from my desk when I’m at the office with her, she’s just always there. And the same thing around the house.”

Jankowski — and his extended family — have also gone all out to ensure Roxie has all the trappings of desert diva-dom. “I really have fun spoiling her. I’ve never had a girl dog before, so I get to buy all the fun pink stuff and all the rhinestones. She’s got a pretty good collection of leashes going. The whole family is definitely into the ‘Roxie Davenport is the new princess.’ She’s the only girl, so she’s the only granddaughter, the only niece, among a sea of boys. It’s all Roxie D.”

Finding each other has changed them both forever, he says. “Roxie brings comfort to my life. Having her come into my life and having the constant daily companionship has really let me know that it’s pretty cool to have a dog around. She relies on me. I want to go home. We like our time together, whether we’re doing anything or not — just watching TV, hanging out, she’s great with that. I love to cook, and she’s always in the kitchen helping me out. She’s been a really good dog.”

And Roxie, he says, at last knows what it’s like to have a forever home. “I bring her stability. I think she’s finally accepting the fact that I’m not going anywhere. Even though I leave her at home for eight hours on days when I have to go to work, she knows I’m on my way home. Every day when I get back, she’s sitting at the door waiting for me. She’s just a gentle, sweet, old soul.

“I lead a very simple life,” Jankowski says. “I’m a working-class kind of guy, and I just love my dog. She’s changed my life, all for the better. I thought I was going to rescue her, and she rescued me. We’ve all said that a billion times, but it’s really true. She’s been a great little girl.” “Peach, our leopard gecko, was adopted from the pet store because she could not be sold,” writes her owner, Jen Bennett. “She had three broken legs and her tail was broken off. We brought her home and she does great! We have had her for about eight months now. So beautiful.”

Princess Peach’s prize package includes recognition at the 2014 Pets on Parade luncheon and a one-year subscription to Palm Springs Life.