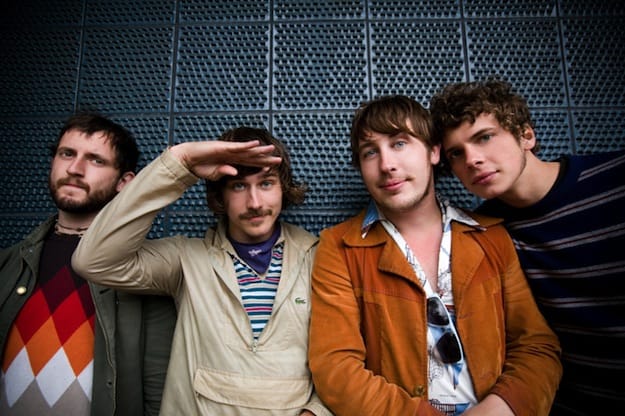 Fresh from appearing at Coachella 2013, Portugal. The Man has released 'Evil Friends'.
danieljoerg.com

Summertime is known for its anthems and soundtracks. From hometown heroes and old favorites, to new releases, upgrade your iPod and favorite playlists with my recommendations of June’s hottest releases.

You loved them at Coachella 2013. Now, Portugal. The Man. returns with Evil Friends. The Pacific Northwestern quintet has experienced a banner year after landing on a number of high profile tour lineups. YouTube has embraced the act, to the tune of some 7 million-plus views of its videos. The clip for “Atomic Man” was released in late May and features impressive camera tricks, slow-motion photography, and black & white close-ups of PTM’s band members.

Camera Obscura holds its own in the rarified air of contemporaries such as Belle & Sebastian, Broadcast, and Eisley. Desire Lines shows music fans exactly why.  Its first single, “Fifth in Line to the Throne” is a delicate love song that smothers the heart with simultaneous warm fuzzies and sadness.  An enthusiastic “welcome back” is in order for this band.

Hometown legend Joshua Homme and his band Queens of the Stone Age release the much-anticipated …Like Clockwork. Fans, critics, and even celebs including Colin Hanks have praised tracks from the record since QOTSA announced its release in late April. Support local music and grab a copy.

Hip-hop princess Ashanti is all grown up on her fifth album, Braveheart. The first single, “The Woman You Love,” features Busta Rhymes. This track is audacious, powerful, and shatters Ashanti’s girl-next-door image. Rumors have swirled that the breakup tune is about the singer’s relationship with Nelly. Decide yourself when the album drops in early June.

Scottish breakout star, KT Tunstall is back, after landing on the soundtracks of chick-flicks like The Devil Wears Prada and Because I said So. Her return is marked with a mature and winsome sound on Invisible Empire // Crescent Moon. Fans will notice a heavy folk-country influence on songs like “Invisible Empire” and “Made of Glass”. The entire effort is a glowing display of Tunstall’s lilting voice and stripped-down instrumentation, which surrenders hints of Patsy Cline, Shea Seger, and Lucinda Williams.

“Saturday Night Live” has long been inducted into the annals of pop culture greatness, but let’s just say that The Lonely Island has contributed to keeping it there. Andy Samberg, Jorma Taccome, and Akiva Schaffer’s comedic band gifted the world with such gems as “Jack Sparrow” (featuring Michael Bolton) and “I’m on a Boat” (featuring T. Pain). The Wack Album promises a collaboration from super-cool queen of downtown chic, Solange Knowles (yes, the other Knowles girl).

Sigur Ros showed the world another side of Shia LaBeouf (literally) when it featured the young actor going the full Monty in the video for “Fjögur Piano”.  Personally, I just can’t seem to thank the band enough for that one. But I digress…  Sigur Ros’ Kveikur (pronounced “Quaker”) bursts with more instrumental genius. Hear the fruits of their labor on the album’s title track.Related reading: Destiny’s (2nd favorite) Child turned reality star Kelly Rowland (pictured right) will not only become a household name this fall on TV’s “The X Factor,” but she’s aiming to be your new favorite pop mega star. The sultry songstress has completed her fourth solo album, Talk a Good Game. Early buzz surrounds “Gone” and “Dirty Laundry” (reportedly about Rowland’s troubles in an abusive relationship), as well as a Destiny’s Child reunion on “You Changed.”

Kanye West will celebrate Father’s Day with baby mama Kim Kardashian (and her bump), while ushering in his wild new release, Yeezus. The Internet is abuzz with reports of unusual songs filled with screaming, rants, spoken word, and Kendrick Lamar. YAY! The embattled rapper fires back at his haters on the track, “New Slaves.” This one is Kanye at his best: raw, uncut, and super-opinionated.

Although their home state of Oklahoma was damaged by the effects of a deadly tornado in May, that hasn’t stopped Taylor, Isaac and Zac Hanson from forging ahead with Anthem. The record displays a mature, less bubblegum sound from the trio of brothers, who rose to fame in the mid-1990s with the single, “MMMBop.” The video for the first single, “Get the Girl Back” was shot at L.A.’s Satellite in Silver Lake, and features “Two Broke Girls” star Kat Dennings. Grab this album for some fun summer … well, anthems. Kim Boekbinder’s spicy alter-ego, The Impossible Girl, is poised to knock Peaches off her pedestal. The electronic wild child’s single “Fix You Good” is a post-apocalyptic mean girl’s theme song, if ever there was one. Hear it when The Sky is Calling releases. Fun fact: This is The Impossible Girl’s second fan-funded album.

You’ve got to love a man who can party with Miley Cyrus, while maintaining the respect of Donald Trump. Bret Michaels, Palm Springs salutes you. Snag his feel-good solo release, Jammin with Friends.

Remember when Wale was one of the first artists to work with Lady Gaga? Their single “Chillin’” was a huge Internet and club hit. Now the rapper is back with The Gifted. Fans can expect sick beats, more of his Washington D.C. swagger and razor-sharp flow, as well as new collaborations with Rihanna and Nicki Minaj.

If you’ve been missing the golden days of the Hustle, polyester, feathered hair, and funky grooves, then fret no longer – disco is back! From Bruno Mars to Daft Punk, music’s hottest are embracing this sound in droves. Catch Escort’s take on the forgotten genre with its new album, Barbarians. This New York-based collective infuses street cred and sing-along hooks into its latest. Prepare to shake your groove thing to the title track, whether you like it or not.