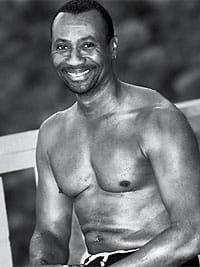 Tony Thompson(above) and Dave Rohr (below) posed for Golden Rainbow Senior Center's 2009 calendar. All images were shot by Chari Godakanda.

How do you remind someone of a need every day (or at least every month)? Make calendars. The Golden Rainbow Senior Center created one for 2009 to help keep the center open and build affordable housing in the Coachella Valley. All sales proceeds go toward that cause.

Harvey Stern, the center’s director, says the idea surfaced after the Gay Pride Parade last November. “The male members [in the center’s parade group] took off their shirts,” he recalls. “And when we walked by the announcer, he said, ‘These can’t be the seniors. They’re too hot.’”

So, to prove that people can be vital and sexy at any age, Golden Rainbow printed a beefcake calendar of gay men. One model, postal carrier Tony Thompson, was especially eager for the photo shoot, once he was assured he could be “Mr. June” (his birthday month).

Each spread includes a black and white photo taken at the Frey House with a brief statement about the model, a fact about LGTB seniors and housing, and sponsor recognition. In addition to Desert Oasis Healthcare, Windermere Real Estate, and Contour Dermatology, Stern notes that AIDS Assistance Program bought a sponsorship. “It’s almost unheard of that one nonprofit will give money to another nonprofit,” he says.

For two days in August, photographer Chari Godakanda donated his time to shoot the models, ranging 50 to 65 years old. Two models, Dave Rohr and Joey Riso, are fitness trainers and newlyweds (Oct. 12) who moved to the desert “to help other older men who needed us desperately, because not many trainers focused on the older population,” Rohr says. “At the age of 44, I was an obese, middle-aged man laying on an emergency hospital gurney thinking I was having a heart attack.” (It turned out to be a hypoglycemic “incident.”) Rohr began working out and has now competed in four bodybuilding contests.

“The photo shoot [for the calendar] was great,” Rohr says. “I was happy that all I had to do was take off my shirt and sit on a rock! It made me feel proud that someone thought enough of me to want to place me on a hunk calendar. I fully understand the importance of a center like [Golden Rainbow] and realize that I will eventually become a part of the center in some way myself. So for me to be able to help raise money, I couldn’t wait to jump on the bandwagon.”

The calendars will be sold at this month’s Pride Festival and are also available from the center’s Web site (www.goldenrainbowseniorcenter.org), at local bookstores, and at World Gym in Palm Springs.

Golden Rainbow Senior Center is working with developer Alan Bloom and Palm Springs city officials to create affordable housing with the senior center as its hub.