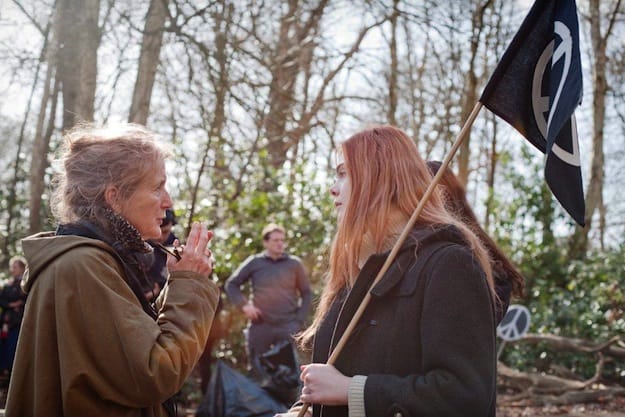 In the opening shots of British filmmaker Sally Potter’s new film Ginger & Rosa, the Hiroshima nuclear bomb silently fills the screen, while two women, side by side in a London hospital, give birth to two girls destined to become best friends.

It’s an explosive beginning for an extraordinary coming of age story about two 16-year-old girls whose carefree youth in the early 1960’s is challenged simultaneously by the Cuban Missile Crisis and a heartbreaking betrayal. Potter’s take on the Cold War versus the sexual revolution is not biographical, but the film’s intensity parallels her own youth growing up in a left wing academic atmosphere.

“This film is a great example of how Sally addresses themes like sexual politics, cultural imperialism, class, and moral hypocrisy,” said Darryl Macdonald, PSIFF executive director. “She’s audacious in the sense that she’s not afraid to reinvent the cinematic form with every film she starts. I can’t think of another filmmaker like her.”

Trained as a dancer and choreographer at the London School of Contemporary Dance, Potter’s body of work is an eclectic mix of dance, performance art, theatre directing, music composition, screenwriting and filmmaking.

Local filmmaker Kim Waltrip said Potter’s willingness to experiment and follow her own path is inspirational.

“She’s an icon in the female movie making world and offers hope to those of us who like to play outside the sandbox,” saids Waltrip. “I admire her willingness to stay true to herself.”

Potter’s 1992 film, Orlando, starring Tilda Swinton, brought her work to a wider audience. With Ginger & Rosa, Potter hopes it will be her most accessible to date.

“I’ve made more conscious efforts with this film to reach out to the audience,” she said earlier this year.

Starring Elle Fanning and Alice Englert, with Alessandro Nivola, Christina Hendricks, Annette Bening and Oliver Platt in supporting roles, the film was shot in five weeks in and around London close to Potter’s production offices.

Initially, Potter posted a casting call on Facebook and YouTube to fill the teen roles. They had 1,500 entries which were shortlisted to 300, then to 30, who were auditioned over two days.

“But the moment Sally met Elle,” said Christopher Sheppard, producer of the film, “she knew she was the one for the part.”

“Elle Fanning is phenomenal in this role. She’s so beautiful to look at, but separate from that she so inhabits this character that you cannot take your eyes off of her,” said Helen du Toit, PSIFF artistic director. “There’s something about Sally Potter in the way she creates female characters that are very deep and rich and nuanced.”