Sweet prickly pears can be eaten raw, but you must protect your hands when picking them or buy them de-needled.
PHOTOGRAPHS BY NATE ABBOTT

Troy Thompson, who became executive chef at Kimpton Rowan Palm Springs last spring, is passionate about sourcing ingredients for his 4 Saints restaurant. One of the main draws in taking the position with the Rowan — besides fleeing his hell-hole loft off L.A.’s Skid Row — is the year-round access to prime agricultural products. “We’ve got some really good ingredients out here that we use on a day-to-day basis,” he says. While he was hardly surprised by some, such as citrus, carrots, and lettuces, others were a revelation. “It seems mushrooms are a real big commodity out here.”

But Thompson isn’t simply content with produce from big and small farms. “I’ve always been interested in Native American food,” says the veteran chef, who has worked for such culinary luminaries as Masaharu Morimoto. “Living in Japan for years, I know why they have shiitake mushrooms. I know why they have chestnuts, what they do with them, and how they preserve them. I know why they salt fish to get them through the winter. It’s [part of their] way of life.”

Thompson made a statement supporting this interest when he introduced “Fish in the Forest” at the Rowan’s rooftop bar-restaurant. The dish features a grilled steelhead salmon atop spring vegetables with smoking juniper served under a glass cloche. The presentation is spectacular, but it’s the smell that steals the show, evoking memories of campfires with the sharp scent of our local mountains.

Dates — eponymous with desert living — are often mistaken as indigenous to the Coachella Valley. However, the common date varieties we enjoy today began with the globetrotting 19th-century botanist David Fairchild, who brought them from the Middle East. The fruit would begin to flourish in Indio by 1915. During the postwar years, the local date scene became a de rigueur weekend destination, especially when a young Iowan named Floyd Shields promoted his farm by giving lectures on the sex lives of dates. The fruit reached its zenith when malt shops throughout the Southland introduced the now ubiquitous date shake.

• READ NEXT: The Sex Lives of Dates 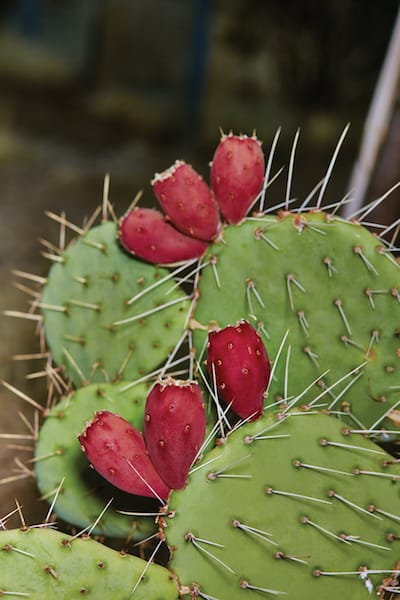 Grin and Pear It

It’s not difficult to find prickly pears growing on nopal cactuses in the wild, just as the Cahuilla did here centuries ago. The problem is harvesting prickly pears. They are covered in needle-like thorns. Even if you pick a shopping bag full without turning into a human pincushion, there’s still the punishment of cleaning them. A better plan is to find prickly pears at a Mexican supermarket, such as Cardenas Markets in Cathedral City and Indio. They will generally have them fresh and de-needled from October to March. To prepare prickly pears, cut off the ends, then make an incision down the side and pull away the skin, exposing the pear inside. Drop them in a food processor until pulped, and put them through a wide mesh strainer. Twelve pears should yield about two cups. To store, fill two large, plastic ice cube trays, cover in plastic wrap, and freeze. — K.B. 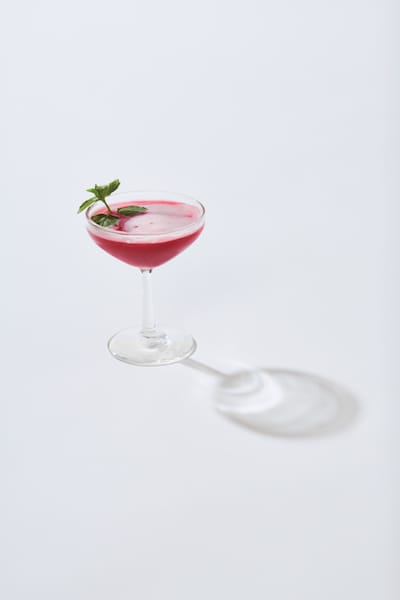 Put ingredients in shaker with ice and mix vigorously for 10 to 15 seconds. Strain into cocktail glass and add a sprig of mint. Makes two cocktails.

In fact, for hundreds of years before Fairchild and Shields, the indigenous peoples of this desert region harvested fruit from the Washingtonia filifera palms, tropical survivors from the age when the Imperial Valley was an inland sea. Also known as the California fan palm, these trees provided the various bands of the Cahuilla people with both food and material for clothing, baskets, and shelter.

When the Spanish moved into Alta California, they avoided the arid region south and east of the San Bernardino Mountains, believing it to be of little value and unable to sustain life, when in actuality,  the desert’s abundance from season to season is extraordinary. As the saying goes, you only have to know where to look. Before Lake Cahuilla (the present-day Salton Sea) dried up prior to 1700, there were fish and waterfowl. In the mountains, hunters used their bows and spears on deer and bighorn sheep. There were agave, wild onions, goosefoot leaves, prickly pears, ocotillo leaves, wild raspberries, chokeberries, juniper berries, chia seeds, pinon nuts, blackberries, and acorns gathered according to their season. After the palm trees were harvested in the summer and early fall (the flesh of their tiny date-like fruit was eaten fresh or dried and ground to provide flour), the Cahuilla turned their attention to the San Jacinto and Santa Rosa  mountains, where they collected huge quantities of acorns, a versatile nut that could be stored throughout the winter. 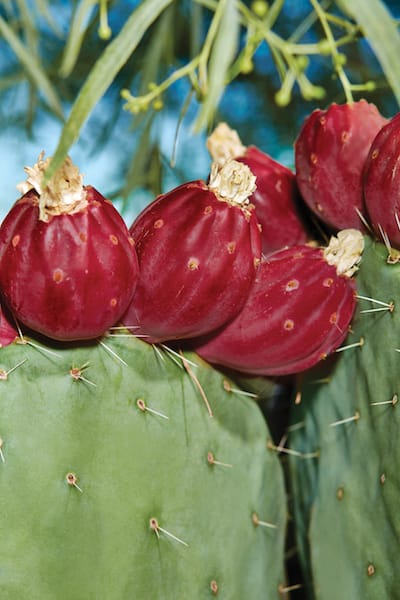 This sweet-and-sour alternative to tomato-based barbecue sauces pairs well with grilled pork tenderloin, ribs, chicken, and duck breast. Thoroughly blend all ingredients, then simmer for 20 to 30 minutes until thickened. Use as a marinade or brush on during grilling.

According to Ralph Rodriguez, an Agua Caliente Band of Cahuilla Indians tribal ranger, the honey mesquite tree, which can grow to 30 feet, was integral to the diet of the Cahuilla people. “Mesquite would have been cultivated by a Cahuilla family,” Rodriguez told the tribe’s magazine, Me Yah Whae, in 2016. “All the growth underneath would be cleared out to form a cave or hollow for gathering the beans. The elders would take a willow stick, which is flexible like a fishing rod, and beat the pods off the trees. Then, the young boys would go inside the hollow and pick up the beans.” The seedpods were ground in rock mortars, sort of stationary metates, carved over hundreds of years into slabs of hillside granite. The flour was then used to make a beverage, mush, or bread.

Perhaps the two most important words in a contemporary’s chef’s lexicon are “local” and “seasonal.” They often translate to a diner’s mind as fresh and authentic. It is no small feat for a chef to embrace this trend born of the slow food movement because such ingredients are often difficult to find and expensive to procure. However, it’s wrong to assume that all local, Coachella Valley ingredients — artichokes (Italy), dates (Libya and Iraq), figs (Spain and North Africa), navel oranges (Brazil), or avocados (Mexico) — are indigenous.

As so many proponents of the slow food movement and adherents of local, seasonal foods evolve their knowledge of culinary anthropology, they inevitably stumble across delicacies that were being developed by indigenous chefs when their ancestors were still eating raw sloth meat in the caves of Southern France. After all, Western Europeans didn’t invent good food. In fact, they were pretty late to the game. The universal truth in the cuisines of all cultures: The humbler the ingredients, the more inventive the chef.

“You can go out and find some unique products that are indigenous to the land,” says Thompson, who frequently foraged for wild ramps when he was living in the hills of Virginia. “The Native American cuisine has always been very interesting to me. I think this little oasis can give a lot more than what people imagine.”