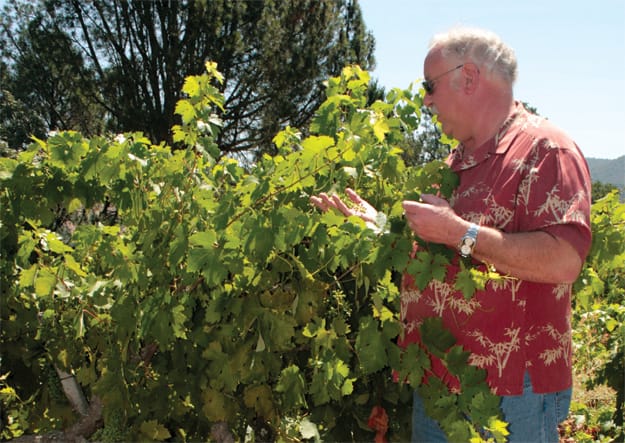 From atop a hill in Sonoma County, Michael Martini looks toward the San Francisco skyline where, on a clear day, he can see the Golden Gate Bridge some 40 miles away.

You might get caught up in the view, which also overlooks hundreds of acres of undulating vineyards, until the Louis M. Martini master winemaker notes that you are in rattlesnake territory.

“The rule of thumb is you never put your hands where you can’t see,” Martini says. Rattlers up to 6 feet in length have been spotted on the summit of Monte Rosso, and smaller snakes wind into the heads of the 120-year-old zinfandel vines.

The 600 acres (250 of which are planted to vineyards, with 10 percent in rotation) range from 800 to 1,200 feet in elevation. Pioneering vintner Louis Martini (Michael Martini’s grandfather) purchased the property in 1938 from Emmanuel Goldstein (no, not the character in Nineteen Eighty-Four, but rather a grocer-turned-winemaker). Goldstein built a winery on Monte Rosso in 1886 using native rock and Chinese labor.

“It was a 20,000-case winery until 1919 Prohibition,” says Martini, who proposed to his wife in Monte Rosso’s Los Niños vineyard and married her in the long-abandoned Goldstein winery.

Phylloxera wiped out the first plantings, making the 1889 post-phylloxera zinfandel on Rattlesnake Hill the oldest red grape vines on Monte Rosso. Louis Martini planted cabernet sauvignon the same year he bought the property, making those 71-year-old vines in the Los Niños block the oldest cabernet on the property.

Semillon and folle blanche (a thin-skinned grape from the Muscadet region of France used to make Armagnac brandy) are the only white grapes grown on Monte Rosso. The semillon vines, in a four-acre block called The Thieves (named for field workers losing objects among the vines), are 110 years old.

The predominant varietal on this hill in the Mayacamas Mountains of Sonoma County is cabernet sauvignon, at 100 acres, followed by zinfandel at between 60 and 70 acres. Petite sirah, syrah, petit verdot, malbec, sangiovese, merlot, and cabernet franc comprise the remaining plantings.

“They’re elegant, not chewy wines,” Martini says. “They have a lot of intensity and are great aging wines.”

E&J Gallo Winery, which has partnered with wineries on a global scale, purchased the Monte Rosso property in 2002. But Martini maintains control of what happens to the fruit. Louis M. Martini’s premier Monte Rosso-designated varietals include zinfandel, syrah, and cabernet sauvignon. It sells what it doesn’t use to 13 other wineries, including Rancho Zabaco, Rosenblum Cellars, Arrowood, Beringer, and Sbragia Family Vineyards. Louis M. Martini and Rancho Zabaco each take half of the Rattlesnake Hill zinfandel.

“We only sell to our friends that we know make really good wine,” Martini says. There’s a waiting list for Monte Rosso fruit. Kent Rosenblum claims he waited eight years before getting zinfandel grapes.

Martini’s Monte Rosso 2005 Gnarly Vine Zinfandel, of which there were 800 cases, sold out in two months. Martini says the 2006 vintage is structurally the same, but a little spicier and less floral on the nose.