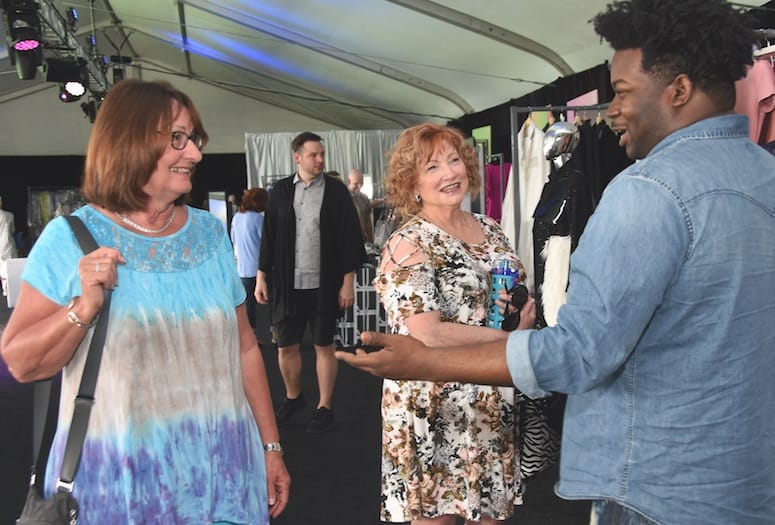 Hopelessly devoted servants to fashion who have yet to experience a Fashion Week El Paseo trunk show shoud have made this one their virgin voyage. Eight gifted designers toted their latest collections from the racks backstage to the racks in the reception tent, offering something for everyone.

On Wednesday morning, nearly every gown, jacket, and itty bitty mini from Tuesday night’s Michael Costello Presents His Friends From Project Runway show had become an accessible temptation. And shoppers did not hold back.

An eager crowd gathered before the doors opened at 11 a.m. – proof that shopping the Fashion Week runways is an anticipated highlight of the seven-night event.

High-energy dance music set the mood and, by 11:10 a.m., Justin LeBlanc had made the first sale of the day. A woman with evident good taste walked out with one of his intricate black chokers, part of a necklace line LeBlanc produces by means of a 3-D printer. Few could pass by his booth without trying one on, then admiring his dresses, heavy with light-flashing sequins. 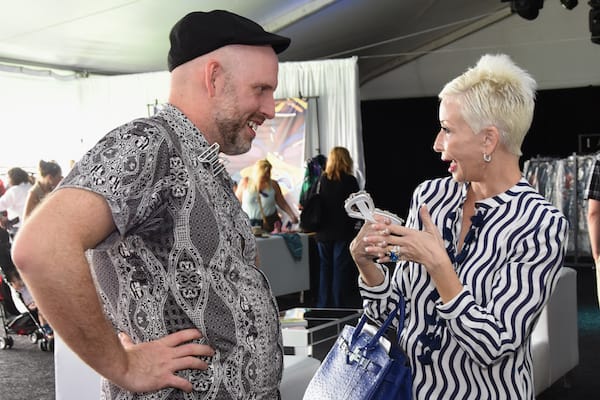 “I married my husband last May in an over-the-top, black tie event,” he says. “I tried to capture that celebration with this collection. When the dresses come down the runway, they have the movement of an all-night dance party.” Another woman stops to buy a necklace, and a signature tote. “It says ‘I love you’ in sign language,” explains LeBlanc, who is deaf. “That’s my language, and I like to spread the love.”

A few booths away, a woman with the lithe figure of a former model eased into a neoprene motorcycle jacket by Laura Kathleen Baker. “I’ve gotten so much response from those,” says the St. Louis-based designer, nodding to her own tossed on a nearby chair. “I wear mine all the time.” From the dressing room, a blonde in a black cocktail dress with a gold metal neckline and cut outs appeared runway-ready … except for the bare feet. Michael Costello, who was making the rounds and hugging his fans, cinched the bottom half of the skirt in back, helping her determine if she should take it in or wear it as is. 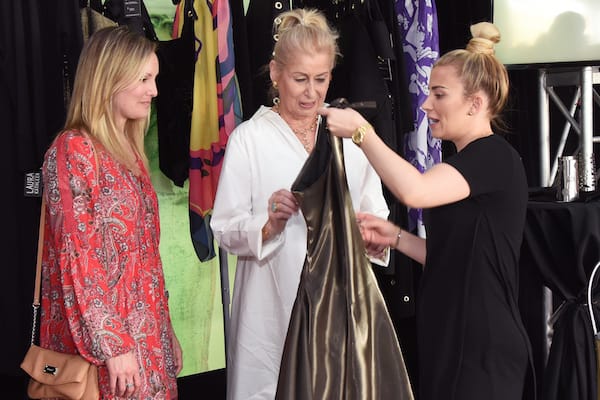 Alyssa Zinola and Bonnie Lampros look at a design by Laura Kathleen Baker.

Each of the eight trunk show booths offered its own conversation, styles, and experience. Back at Costello’s own, a buxom young woman was posing in the mirror. She fully embodied the youthful side of Costello’s demographic in a slinky black pencil dress with a sheer mesh bodice and sleeves. “That dress really enhances what you’ve already enhanced,” her friend nodded with approval. Looks like another happy customer.

“Sexy but carefree and on the go” is how Mah-Jing Wong summed up his collection. His sporty street-to-date night wear incorporates double-knit scuba and hand-dyed distressed denim, sometimes in the same garment. Wong likes fabrics that stretch and breathe; he values pricing that won’t break the bank. His denim pieces seem especially practical, in sizes that range from XS to 1X, with just the right slit or crop. “There’s a fine line between sleaze and appropriate,” he said. “I want my girls to look cute but feel comfortable.”

Viktor Luna’s collection enjoyed a steady stream of interest and try-ons, though most were snatched from his women’s rack and not his dramatically experimental unisex menswear. “The way he designs, his pieces transform you,” explained one of his assistants, as Luna’s tiny dog, Mickey, sniffed at shoppers’ ankles. “When you walk in a room wearing something he has made, everyone turns around and wants to talk to you. I know because it’s happened to me.” 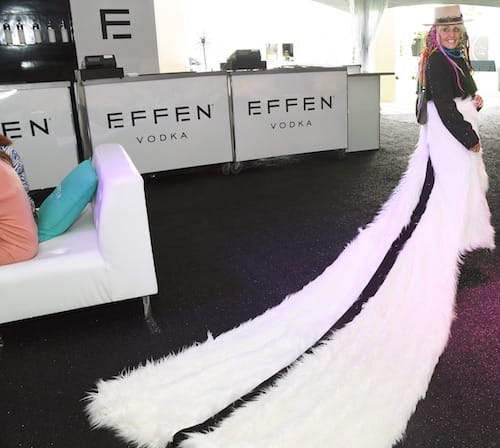 By contrast, Kentaro Kameyama’s booth was still and calm. Last season’s big Project Runway winner sat and chatted one-on-one with those who paused to browse just 12 runway pieces spaced equidistant apart on his rack. “I think they should play classical music,” he remarked of the tent’s nightclub soundtrack. “It makes everything look more expensive.” As a classical pianist, Kameyama composes the score for his runway shows, of which he has done “too many” in the few years since graduating from fashion school. Today, he’s tired but talkative.

Denim pants, formerly white, were painted black with Matisse as his muse. Sparse white streaks remained. “Matisse painted the background, filling space instead of creating dimension,” he explained. And the thin shoulder straps like dental floss on his dresses? “You have to fight with the fabric to make it that skinny.” He taught the dressmakers his technique.

A couple approached to shower him with praise. “You’re a true artist,” they pronounced. (Little do they know he was also a state champion in Chinese calligraphy.) He bowed in appreciation.

Meanwhile, he had been watching the flurry of activity across the tent at the booth of Margarita Álvarez. “I think she should open a shop here,” he said.

Her first name suits her. The booth held a cheerful cocktail of sequins, feathers, and island-vibe prints. It hadn’t slowed since 11 a.m., when shoppers began swarming her designs and taking photos on the backdrop she designed for that purpose, complete with a matching jacket they could wear for the occasion. 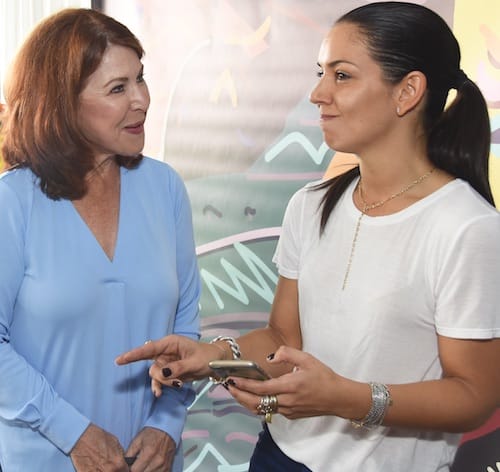 “I just wanted to make it an experience,” she said. “Not come and shop, but come and experience Margarita.” Project Runway judges told her she wouldn’t sell a thing in New York. By noon, her sunglasses have sold out; so have the gloves. “I’m just thankful that people get me here. I sold the jade sequins skirt with feathers to a woman who is going to a wedding,” she said. “She had already bought a dress and is going to take it back. I live for this!

Classic model Camerone Parker McCulloch has just shopped her booth, too. “Some people collect spoons. I collect art,” she said, adding that she owns the largest collection of pieces created by Project Runway designers – and she means every version of the show, on both Bravo and Lifetime. At today’s trunk show, the Phoenix-based beauty has already picked up a black slip dress from LeBlanc to pair with a red petal-covered coat by Emil Gampe of Emil Couture from Sunday night’s Le Chien show. Candice Cuoco’s booth added one more piece to her growing collection

One could easily spend hours browsing the five teeming racks by Cuoco. Some of the more structural gowns must require help to step into them. Parker went straight to a paneled, bridal satin coat covered in a garden of wild red roses. Black leather straps buckle around the flare of its sleeves. Cuoco had paired it with a steel corset for the show; Parker opted for pearl-studded sunglasses. 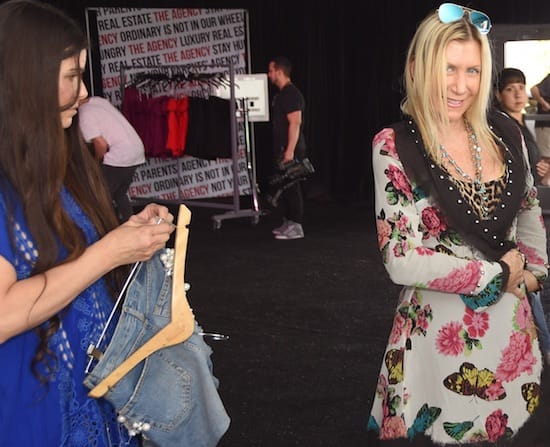 “That’s fantastic!” shrieked an assistant, to which Parker gave a little shimmy. “She looks better than the models,” another affirmed. “I actually walked for many years,” remarked Parker, a widely published FORD agency face and former Fashion Week favorite. Her new trunk show finds are coming with her to Tucson this week to receive a Cele Peterson award for lifetime achievement. These designers’ designs are going places.

Kameyama, who had been sitting primly on the sofa conversing with visitors all morning suddenly threw on one of his pink dresses and twirled around the room. Guests were quick to snap a photo. The moment was pure post-runway joy, relief, un-jaded spontaneity, and tiredness becoming slap-happiness. Try as he might to resist, the dance music had moved him.