C. Thomas Howell (left) and Darren Dalton, who both ahve appeared in Red Dawn and The Outsiders, will be at the PS Comic Xpo starting June 22.
PHOTOGRAPH BY CORY ZIMMERMAN

You’ve heard of Grey Delisle. As the voice of Daphne Blake in the Scooby-Doo cartoons and direct-to-videos since 2000, Delisle has built up an impressive resume of animation work. But you may not know her passion to do stand-up comedy.

The PS Comic Xpo has invited Delisle — along with a slew of famous voice actors behind the animated characters that draw fans to these conventions — and she will have her 15 minutes on stage.

“What we’re doing different is … a lot of these celebrities and voice actors, they actually have hobbies,” PS Comic Xpo founder Meachele Campbell says. “A lot of them have bands, or they want to be a comedian or a chef, or things like that. They have these things that they like to do outside of the “day job” for them. So what our expo is doing differently is we’re giving them this platform to showcase their hobbies.”

Voice actor Carlos Ferra, who has dabbled as a deejay, kicks off the inaugural Xpo June 22 with his own set, while Delisle will perform June 23. The Xpo runs June 22–24 at the Palm Springs Convention Center.

Campbell, a Palm Springs resident, has both produced and attended comic conventions in Chicago, Salt Lake City, and New York. She knows what she likes — and what she doesn’t — about how these events are produced. She also has a habit. “I’m a serial entrepreneur ... and I love the comic book world,” she says. “It just made sense that when I was going to produce my own show, let’s do it in my backyard. It’s beautiful … the celebrities ... everybody wants to come to Palm Springs!”

It was inevitable that she would produce the convention her way, an accurate description of the entire PS Comic Xpo organization. In a heavily male-dominated industry, Campbell has built an all-female team. “It actually happened by accident,” she says. “I had been building the team, and I started to think about ... well, who do I know that can fill certain positions ... they just happened to all be female.” 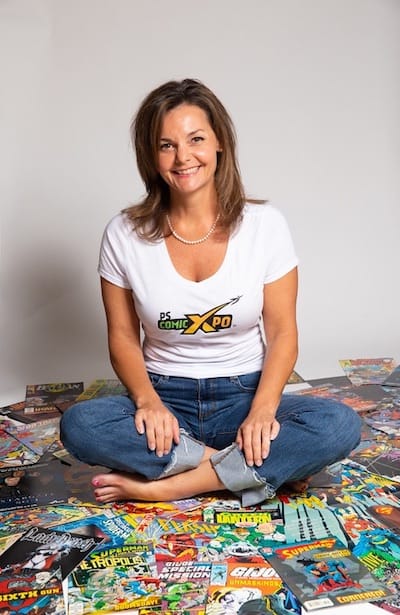 Campbell’s vision of a family event led to partnering with the Palm Springs Art Museum to open its activity room where kids can design their own custom T-shirts. “The kids come in, and they draw stick figures, trees, it doesn’t matter,” Campbell says of the event with sponsor Electric Easel. “Whatever they draw, they put onto a T-shirt. So the kids can put it on and wear it home!”

Another unique activity is Cosplay Yoga where attendees can “get into your character’s state of mind while helping you with the flexibility needed for all those Cosplay poses,” according to the website.