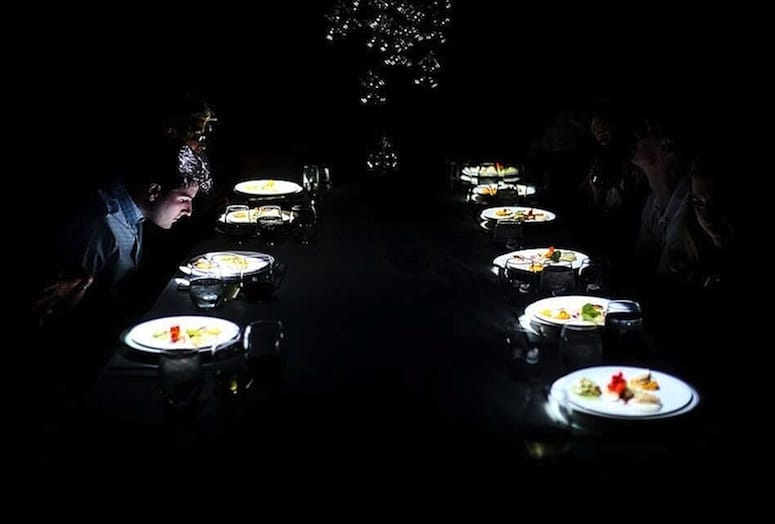 PS Underground has been described by owners, Michael Fietsam and David Horgen, as “temporary culinary installations,” each based on a “supper club” concept, where guests join the club to find out details of upcoming events and reserve prepaid seats.

The location, menu, and entertainment for each event are kept secret until midnight before the date of a scheduled reservation, when members receive an email with instructions.

What began as an in-home series of dinner parties for friends has transformed into a year-round business. With a Palm Springs-based catering kitchen and roving locations across the Coachella Valley and beyond, the events continue to evolve as the business hopes to attract more members to its club.

Craft was an event hosted at Coachella Valley Brewing Co., featuring a six-course dinner paired with local, hand-crafted brews that were used as flavoring in each course.

At one dining event, Fietsam and Horgen met people from KMIR, the local NBC affiliate in Palm Springs, who asked them to consider a TV series about their unusual venture. After some discussion over the “hush-hush” nature of their concept being shared via a TV broadcast, they determined this form of advertising was the next progression in the business' growth, according to Fietsam.

VIDEO: Watch a promo of the upcoming PS Underground show, which starts airing May 14.

Initially, the PS Underground series will be 10, 30-minute episodes, airing on Saturday nights from 7:30-8 p.m. PS Underground starts May 14 and runs for 20 weeks, so each episode will be shown twice. Seven of the 10 episodes have been filmed, each focusing on a different event. The series will capture the idea behind each event, and include food preparation and how the theme, location, and production come together.

But “secret” is a major attraction for some people who participate in the events. Does the TV show compromise that branding element? Fietsam thinks not. “We will give sneak peeks to pique interest but people still won’t know the menu, location or who will be joining them for dinner,” he explains. Because no two nights are the same, and guests are asked not to divulge any secrets until after a particular concept has concluded, PS Underground is confident the exclusive nature of the idea will endure.

From its Bite event in October of last year, guests were transported to Transylvania.

Pricing for culinary installations vary, but a special 10-day offering will be available during Greater Palm Springs Restaurant Week, June 3-12. The theme will be Velvet Supper Club, described by Fietsam as, “a sultry, sexy, supper club with some of the wild and crazy elements of food and entertainment production that PS Underground is known for.”

Although the event is part of the prix fixe format offered during Restaurant Week (tickets can be purchased for $48 each), the four-course menu will not be divulged in advance, in keeping with PS Underground’s approach to culinary entertainment.

Tickets must be purchased in advance for Velvet Supper Club, and seating for each night is limited.