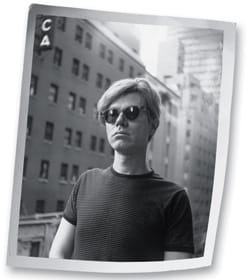 Twenty years after his death, Andy Warhol still impacts our cultural perceptions. M Modern Gallery in Palm Springs opens a double-feature exhibition this month that celebrates the pop artist and a member of The Factory.

Warhology includes works by more than 50 artists inspired by the man who turned his creative eye toward consumerism. An opening reception runs from 7 to 10 p.m. on July 14. Offering gallery-goers something more to discuss, Palm Canyon Theater will screen the 1966 Warhol classic Chelsea Girls and a 20-minute documentary on Edie Sedgwick titled Girl on Fire during the day.

Also at the July 14 gallery reception will be Viva Hoffman, exhibiting her landscape oil paintings in One Icon and a Bunch of Landscapes. Though she began making art at the age of 5 as a courtroom artist (her father was a criminal lawyer) and studied painting at the Academie Julian and Grand Chaumiere in France, Hoffman put down her brush in the 1960s when she starred in Warhol films and video. She subsequently worked as a model for the likes of Richard Avedon and Annie Leibovitz and appeared in Ms. Magazine, Vogue, Harpers Bazaar, and Vanity Fair. She also published two novels, Superstar and The Baby, and in the 1990s wrote for The Village Voice, Cosmopolitan, and Vanity Fair.

Now a resident of Palm Springs, Hoffman resumed painting in the 1980s. Her work is in the collections of The Fulton Furness Museum in New York and Warhol Museum in Pennsylvania, as well as in numerous private collections.