The Palm Springs Golden Chamois has been on exhibition at the Michael H. Lord Gallery in Palm Springs 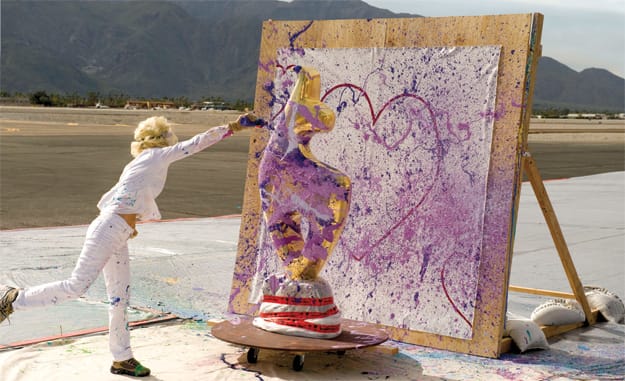 Tarinan von Anhalt demonstrated “jet art” in a tribute to her late husband, Jurgen, and as a way to raise money for charitable causes.
TAYLOR SHERRILL/SHERRILLASSOCIATES.COM

When Tarinan von Anhalt spattered paint on the gold leaf-plated representation of the heraldic fawn of Margarete Klingler’s Austrian hometown in the Alps, master goldsmith and sculptor Klingler applauded. Oddly, Klingler brought the 6-foot Golden Chamois to Palm Springs specifically for that purpose. Even more unusual was von Anhalt’s method of application: using the blast of air from a jet engine to disperse the paint — the “jet art” technique invented by her husband, Jurgen von Anhalt, who died May 22, 2008.

Klingler’s business partner, Ricki Weiss, saw Jurgen demonstrating jet art on television and immediately called Klingler with the idea of a collaboration to benefit their Gold-Kitz Charity for children with cystic fibrosis. Weiss called the von Anhalt residence in Indio to suggest a joint event and learned that Jurgen had recently died. After a lengthy conversation, Weiss and Tarinan agreed they would carry forth the plan in tribute to Jurgen.

On Feb. 28, Tarinan — dressed in white and wearing a blonde wig — stood behind a jet at Atlantic Aviation in Palm Springs and covered two canvases and the Golden Chamois in paint. An Austrian cameraman recorded the event for his country’s newscasters. On April 3, the event was repeated in Klingler and Weiss’ hometown of Kitzbühel, Austria.

The Palm Springs Golden Chamois has been on exhibition at the Michael H. Lord Gallery in Palm Springs in the hopes that someone would purchase the sculpture to benefit Gold-Kitz Charity and the Jurgen von Anhalt Art Foundation to assist budding new artists with art supplies. During Fashion Week El Paseo in March, the sculpture was exhibited in Palm Desert, and Jet Art Silks (a collection of gowns, dresses, and scarves derived from Jurgen’s paintings and designed by Fedor) were shown in a trunk show and on the runway.