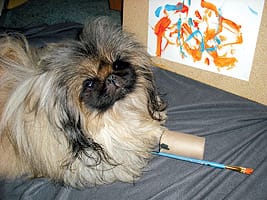 Although he only picked up his first paintbrush in September 2007, Ziggy already has exhibited and sold his work, appeared on television, and been invited to the Playboy Mansion.

If that sounds like an incredible achievement, consider this: he’s only 3 years old.

Originally from Palm Springs, Ziggy now lives in Fallbrook (about 70 minutes away) with Elizabeth Monacelli, who adopted him from Adell Lantz, a breeder and founder of Forget-Me-Not Peke Rescue in Cathedral City. Monacelli was adopting Simon, a rescue Pekingese, when the six-pound Ziggy pounced on the door. Monacelli thought he was a puppy, but he was already 13 months old.

Since Ziggy is of show dog stock, Monacelli entered him into competitions.

“I discovered he really didn’t like to be in the ring,” she says, “and that led to discovering his painting talent.”

“I like to do interesting things with all of my Pekingese to keep them active so they don’t get bored,” explains Monacelli, who has five of them. “I wanted to try to find something that would make him happy.”

She noticed that Ziggy enjoyed music (she is a professional violinist) and playing with a paper towel tube. Then she recalled that her father, who was a schoolteacher, played classical music to inspire his students in drawing and painting. Monacelli propped canvas on a board against the wall at the diminutive artist’s ground level, taped a paintbrush onto a paper towel tube, dipped the brush into paint, and handed it to Ziggy.

“He puts the roll in his mouth and jabs it up to the canvas,” Monacelli explains, “moving his head up and down or sideways.” Because the canvas is 11×14 inches and Ziggy is only five inches tall, she has to rotate the canvas. She also helps the artist by dipping the brush in paint, though Ziggy sometimes dictates the color choice. “He will grab onto the paint brush and be very adamant about the color,” she says. “He would have the paper roll in his mouth and force my hand in another direction to another color.”

Ziggy prefers painting to Qigong music in the early morning. Despite the Chinese meditation-style accompaniment, his attention span wanes after a short while.

“After a half-hour, he drops the brush and walks out of the room, and he will not do it anymore,” Monacelli says. “One time, we did up to a whole hour.” She determines when a painting is completed (Ziggy averages less than one a month) and supplies titles such as Peach Blossom, Summer Festival, and Emperor’s Palace, but Ziggy “pawtographs” them.

In July, Ziggy attended the celebrity-studded Bow Wow Wow fundraiser for Much Love Animal Rescue, held at the Playboy Mansion.

Monacelli sells Ziggy’s original paintings and prints for $25 to $50 and donates 10 percent of the proceeds to Forget-Me-Not. She also offers paintings for pet organizations to auction and sells postcards and note cards of his work on his MySpace page (his MySpace friends include Oprah Winfrey; Robert DeNiro; and Placido Domingo, with whom Monacelli has performed).

Ziggy is not the only one in the household with a Palm Springs connection. Monacelli, who plays violin with the San Diego Symphony, also performs regularly with the Desert Symphony. “I love playing with that orchestra,” she says. She also travels to Palm Springs monthly to visit her half-sister and take Ziggy to visit his mom.