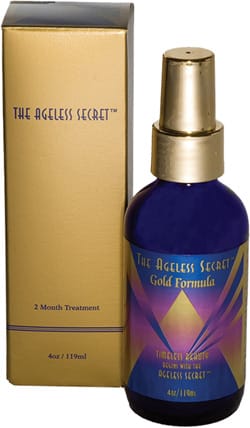 Sales of The Ageless Secret rose 40 percent since last year, shortly after the company’s relocation from Rhode Island to Palm Desert. “The people here are just really concerned about their appearance,” says President Jim Kaszyk. He tells customers that bottles of The Ageless Secret will last two months. In Rhode Island, they lasted four months; in the Coachella Valley, they last one.

After earning a degree in chemistry from the University of Massachusetts and working as a lab technician in aerospace medicine during a tour of duty in the Air Force, Kaszyk applied his expertise to toxicology, textile printing, and epoxy resin. When his father was diagnosed with an incurable illness, he turned his attention to alternative medicine. While making a line of herbal products, he read about the work of a professor at Yale School of Medicine on the energy field that surrounds the human body and thought he could create an anti-aging formula with energy-rich ingredients that work in harmony with the body.

Kaszyk spent 15 years perfecting a formula comprising purified water, MSM (organic sulfur), aloe, trace minerals, and catalysts such as niacin, cayenne, and helichrysum. The result is a spray whose effects are enhanced by heat. It was first used at Desert Longevity Institute in Palm Desert and now is available at several locations, listed on company’s Web site, www.agelesssecret.com.