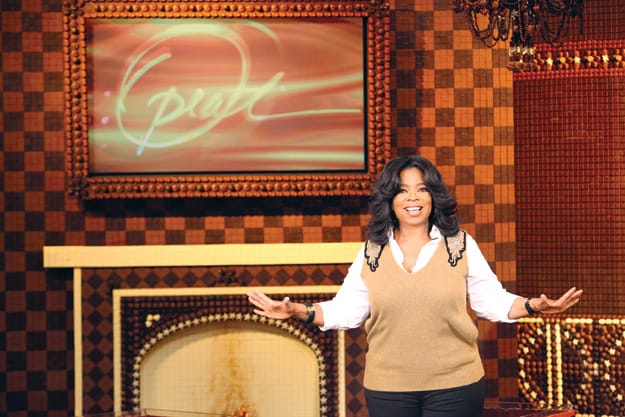 At the end of her Feb. 22 show, Oprah Winfrey invited audience members to come on stage and walk off with pieces of the set. It wasn’t the icon’s early exit from network television to cable (scheduled for 2011), but rather her largesse in fulfilling chocolate-lovers’ dreams. And it eased deconstruction for set creators Larry Abel (shown on right) and Raymond McCallister, owners of A•S•I in Hollywood and Palm Springs.

With Godiva Chocolatier as one of their clients, the event planners have furnished entire rooms in chocolate, including a Bryant Park Hotel suite that featured a chocolate headboard. They made a chocolate lounge for a Golden Globes party and used 3,000 truffles to create a full-size grand piano for a pre-Oscar party.

Five days after taking a call from Oprah’s office, Abel and McCallister were in Chicago with 800 boxes filled with 52 different kinds of Godiva chocolates (more than 15,000 pieces) and a crew of 22 people. “In the entertainment industry everything happens very fast, and we have gotten used to that,” McCallister says. One could expect, given the small window of time, they would repeat tried-and-true designs. But, Abel says, “The stuff we have done before has been picked up by AP and seen all over the world. Since it was our first time on The Oprah Show, we wanted to do something we haven’t done before.”

“We don’t have any preconceived idea of what we are going to do,” Abel says, referring to the mosaic. “We look at the pieces and start putting it together. It takes a number of hours to get a pattern.” A chocolate chandelier, however, took the most time to make, including more than 20 hours of stringing chocolate strands. (Man hours for the entire set: 1,400.) Abel emphasizes the input — creative and technical — from the whole team. “It takes a
village,” he says.

“We do have a general idea of what we want — the spirit of what it needs to be. The devil is in the details,” McCallister says. “That’s where we get creative.”