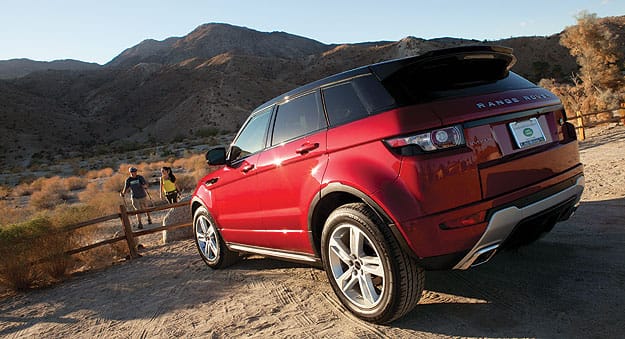 With a sporty, compact design and buffet of personalization options, Land Rover’s two-door Evoque adds a refreshing twist among luxury SUVs — a class of vehicles that has lost popularity because of their perceived largess in an unstable economy.

The all-wheel-drive Range Rover Evoque is 17 inches shorter and 30 percent lighter than the Range Rover Sport. Yet by all reports, it’s no less a beast when it comes to off-road driving, and its ride is smooth as silk. A computer-controlled Terrain Response system adjusts to road conditions up to 1,000 times per second.

The Evoque — the 2012 Motor Trend Sport/Utility of the Year — was drawn largely from the Land Rover LRX concept car exhibited at the 2008 Detroit auto show. Its sleek, rear-sloping roof was the first style statement that Gerry McGovern made as the company’s design director.

Its four-cylinder, 240- horsepower turbocharged 2.0-liter engine is hardly the fastest or most powerful in its class. But the vehicle distinguishes itself by being as agile as a sedan and more practical and efficient on the road than its brawny brethren.

It’s available in three- and five-door body styles (Land Rover calls them two- and four-door models). The four-door model looks like other luxury crossovers, but it comes in Pure, Prestige, and Dynamic trim packages. It starts at about $44,000. The two-door coupe costs $1,000 more and is available in Pure and Dynamic trims. Both offer ample passenger and cargo space, substantial reductions in emissions, and respectable fuel economy: 19 miles per gallon in the city and 28 on the highway.

This vehicle probably signals what will come from Land Rover, as the brand looks t o streamline and revitalize the market for everyday SUVs.