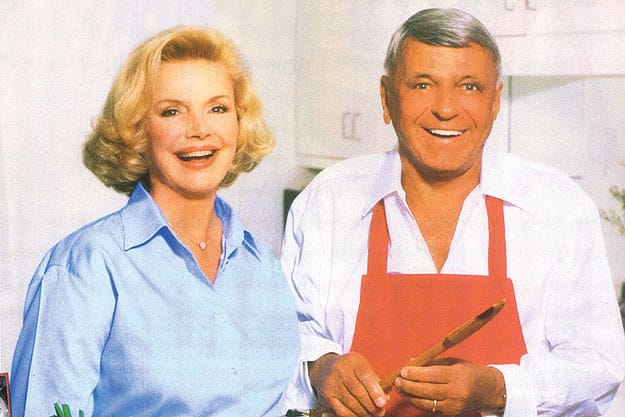 Stories of celebrities frequenting Coachella Valley restaurants abound. Photographs at the Palm Springs Historical Society and published in Palm Springs Life attest to their enjoyment of the local cuisine/nightlife scene.

But because many celebrities have owned residences in the desert, it follows that they occasionally ate at home. Frank DeCaro, best known as the movie critic on The Daily Show With Jon Stewart, has published his collection of more than 145 recipes from famous men and women whose stars now shine in the heavens (as well as on Turner Classic Movies). The Dead Celebrity Cookbook (HCI, 2011) features culinary concoctions from several celebrities with desert connections (those who lived here or visited often). Among them are Elizabeth Taylor’s chicken with avocado and mushrooms, Dinah Shore’s red snapper, and Frank Sinatra’s barbecue lamb. Burgers come courtesy of Dean Martin and William Holden. Lucille Ball gets her own chapter with six recipes (including chopped chicken liver and “Sunday night” goulash). Sonny Bono, who not only served as mayor of Palm Springs but also owned Bono’s restaurant (just north of today’s Riviera Palm Springs), pays homage to his Italian heritage with a recipe for spaghetti with fresh tomato sauce.

The book's recipes for Merv Griffin’s stuffed squash and Liberace’s sticky buns are below. If you want to explore more star-powered dishes, you can find DeCaro’s book at Just Fabulous in Palm Springs and online.

Recipes from The Dead Celebrity Cookbook by Frank DeCaro

Published with permission from HCI Books

In a large bowl, toss together stuffing, lemon juice with zest, pineapple with water, apricots, onion, nuts, coconut, and butter. Stuff squash with mixture. Bake squash halves for one hour in a preheated 325-degree oven. Garnish with 2 T. toasted coconut.

Combine raisins and rum in a small bowl and warm in microwave on high for 45 seconds. Set aside.

In a saucepan, melt butter and then stir in spices and brown sugar. Cook, stirring frequently, until it becomes a bubbling syrup. Put a teaspoon of syrup and a few whole pecans in each muffin cup.

Unroll one package of crescent rolls on a piece of parchment paper. Pinch seams together to form one flat piece. Drizzle a quarter of the syrup over the dough. Sprinkle a third of the raisins and a third of the chopped pecans on the dough. Roll it jelly-roll style. Cut into 1-inch-thick pieces. Place one slice of dough, cut side up, in each muffin tin. Repeat with each package of rolls.

Bake 13-15 minute or until golden brown. Remove from oven and immediately flip the buns onto a cookie sheet covered with parchment paper. Replace any nuts that may have stuck to the pan and serve warm.