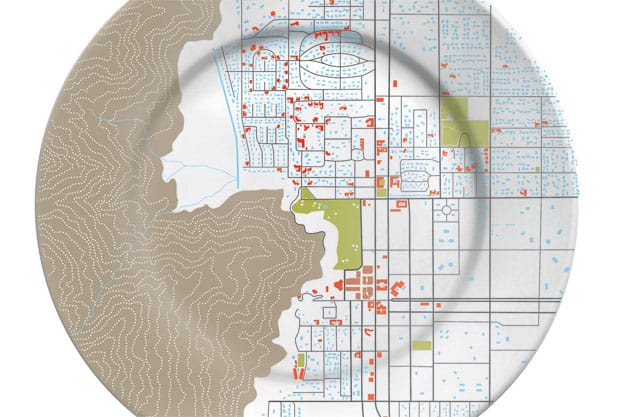 You’ve dined in Palm Springs. Now you can dine on Palm Springs. NotNeutral (Rios Clementi Hale Studios), which has a store in the Uptown Design District, offers a porcelain “map” of the western edge of the city. The left (west) side of the plate resembles a topographic map of the San Jacinto foothills. The rest of the plate maps the town from Racquet Club Road south to Sunny Dunes Road and east just past Hermosa Drive. Parks and golf courses are indicated in green, midcentury modern buildings in orange, and swimming pools in blue. A key accompanies each plate so you can place a pea on the Kaufmann house or hide the House of Tomorrow under a sprig of parsley.

NotNeutral sold about 100 plates during Modernism Week. “It was like a wildfire,” says Sales Director Edward Figlewicz, adding that people would buy a plate and post a photo on Facebook, drawing more folks into the store and to the retail market next to the prefab model house on Palm Canyon Drive. “Even after Modernism Week, we sold a lot to local people.”

The plates are sold at the notNeutral store and online at www.notneutral.com.