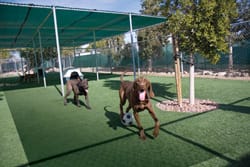 Robin and Pistachio, two frisky pups with tons of pizzazz, run and play on the grass, harmlessly roughhousing — and it’s all cute and innocent. Add 134 other dogs to the mix, however, and you have a hairy situation. At the Humane Society of the Desert’s Orphan Pet Oasis, where they have 136 dogs, they know the meaning of doggie discord.

To bring some order, all canine residents receive obedience training after spending three months at the Orphan Pet Oasis — and more training and positive reinforcement continue throughout their stay.

The staff and volunteers make sure the dogs retain their knowledge. Every month a pop quiz tests their ability to stand up against the heel, the sit, and the dreaded walk on a leash.

“The obedience courses make the dogs more adoption-friendly,” says Orphan Pet Oasis president Malinda Busto. “Our ultimate goal is to find our animals permanent homes. The dogs love it so much here that they don’t want to leave. We’ve had instances where we’ve had to have a volunteer help get an animal into the car.”

No doubt, however, that once Robin, Pistachio, and the rest of the gang experience life in a loving home, they’ll find the grass is indeed greener on the other side of the fence. And with the obedience training they receive at Orphan Pet Oasis, their new family can expect they won’t be digging up that grass. You could stay home and let them go without you.

You could go with them and assemble an entrée of side dishes.

Or you could go to a steakhouse that recognizes that not everyone wants to gnaw on a slab of beef.

Michael Estrada, owner of The Falls Steakhouse, has had enough requests for vegetarian items that he asked Chef Chris Pope to create a separate menu without beef, poultry, and seafood. “You can be more creative if you plan ahead,” Estrada says, acknowledging that vegetarians often get short shrift when steakhouses have to prepare a dish spontaneously.

The Falls Steakhouse in Palm Springs and La Quinta offers a vegetarian menu that includes not only salads and desserts (usually not a problem), but also three tempting entrées:

Vegetable Frittata — a sauté of seasonal fresh vegetables baked into a crustless quiche, finished with a gratin of creamed spinach.

Ruth’s Chris Steak House in Palm Desert has only one vegetarian entrée on its menu, but it’s more innovative than a token plate of steamed veggies:

Rattlesnake at the Classic Club in Palm Desert, which bills itself as a steakhouse, offers vegetarians a hearty choice:

Modernism By The Book

La Quinta added two large horses to its stable of public art in November. Both bronzes are tied to new home communities in the south end of the city.

Andalusia is the work of Sacramento artist Patricia Borman. The sculpture, which cost $180,000, was commissioned by the luxury golf community to complement the architectural design theme of Andalusia, Spain.

Village. Three were previously installed inside the gates of the equestrian community and thus are not a part of the city’s public art collection. Mounted on boulders outside the gates, Striking Freedom cost $120,000. A second public art sculpture of two horses, titled Romance and costing $180,000, will be installed at Monroe Street and Avenue 54 at a later date.

Where No Waterslide Has Swirled Before If a waterslide is too tame for you, consider Alien Abduction.

La Quinta resident Steve Levine, president and CEO of Splashtacular Entertainment, has developed a 75-foot-tall slide that incorporates Hollywood-style special effects for a multisensory experience he calls “hydrotainment.” With the debut of Alien Abduction at the World Waterpark Association trade show at Palm Springs Convention Center, Levine said he established a new division of his company to create a signature ride every year that offers waterpark visitors the immersive experience that theme-park visitors have come to expect.

“Alien Abduction offers a pre-show, main show, and post-show,” Levine says. The pre-show occurs on the ground, where riders board rafts, which lift on a spinning platform through a cloud of fog (no climbing a ladder). The main show occurs inside the spaceship, where aliens interact with riders. The post-show occurs when riders launch into the 300- to 400-foot-long tubes outfitted with more special effects.

Rear projection on sheets of water, animatronics, lasers, and sound effects are only a few of the technologies used to enhance the waterslide experience. “You will never see the same thing twice,” Levine promises, noting that the computer will randomly mix up the various effects.

While Levine enjoys life in the Coachella Valley, Splashtacular’s engineering and manufacturing take place in Missouri and Nebraska. And because Alien Abduction costs between $12 million and $15 million, you must visit one of the larger waterparks in the United States or Caribbean Islands where Splashtacular (the largest U.S.-based waterslide manufacturer) sells its rides. Who would have thought with today's skyrocketing prices for Alexander houses that there was ever a time when developers would need to rely on  a free "Jolly" ride to see the future icons of the desert? The construction of George and Robert Alexander's  homes doubled the size of Palm Springs and allowed the city to take on a new direction as a focus for modernist architecture. Some developers think beyond natural geography. New islands are surfacing off the coast of Dubai, including a group shaped like a map of the world and now an 815-acre artificial archipelago in the shape of the Russian Federation in the Black Sea. Federation Island, designed by Erick van Egeraat, will offer residences, hotels, and recreational facilities.

At Art Basel Miami Beach — the largest, most important art fair in the Western Hemisphere — dealers, collectors, curators, and enthusiasts from the desert were easily found at the main event and at more than 30 “satellite” fairs. Palm Springs Art Museum Director Steve Nash was looking at photography at Pulse Miami, where Melissa Morgan-Nauert of Modern Masters Fine Art scouted artists to expand their program. Christian Hohmann of The Hart Gallery reconnected with German dealers and artists. Private adviser Veronica Fernandez scoured the fairs for works that fit her clients’ bill. Barrie Mowatt, owner of Buschlen Mowatt Galleries, purchased pieces for his personal collection. And a major news network wired a Bighorn Golf Club couple, which shared their Art Basel experience with a national audience.

I Love My Roomba

An artificial intelligence researcher in the Netherlands forecasts that within five years robots will become so human-like in appearance and personality that men and women will fall in love and have sex with them (the technology is already there, says David Levy of the University of Maastricht). Furthermore, he predicts Massachusetts will be the first state to legalize human-robot marriage. But he doesn’t think that will happen until 2050.