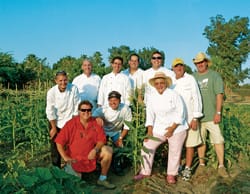 A half-dozen chefs roamed through Janell and Jeff Percy’s 1/3-acre garden, picking eggplant, corn, leeks, peppers, tomatoes, squash, watermelon, and herbs. A couple of days later, they were serving their fresh vegetable and fruit creations to a large crowd gathered at the Percys’ Bermuda Dunes ranch.

The occasion marked the first “gardenside gala” of the Desert Cities Convivium of Slow Food USA. More than a hundred guests enjoyed the bounties of the Percys’ garden, gourmet talent, and the knowledge that they were contributing not only to Slow Food, but also to Hidden Harvest, which provides field-recovered produce to low-income farm workers.

Slow Food USA is a nonprofit whose goal is to catalyze a cultural shift away from the industrial food system toward a sustainable food system and return to a slower pace of life that celebrates food traditions.

“The idea behind it is to educate people on the values of buying locally grown foods whenever possible,” says Bob Pechous, who started the Coachella Valley convivium. “It wasn’t a big change for me to start thinking about slow food. It was just an opportunity to get like-minded people together and promote the slow lifestyle.” A chef at Rancho La Quinta Country Club, Pechous called upon colleagues to contribute to the gardenside gala. “It was such an easy sell for these chefs around town,” he says.

“My ultimate goal is to have at some point in the desert area a farmers market with locally grown foods.”

Name tags at the dinner in the Percys’ back yard read, “My name is [blank] and I [blank] food.” Guests filled in the second blank with the words “grow,” “cook,” “serve,” “eat,” or a combination thereof — proving that food indeed builds a sense of community. Information: (760) 200-8684 or jnewcpr@aol.com.