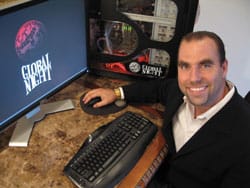 Although Dell and Hewlett Packardpaid hundreds of millions of dollars for his competitors (Alienware and Voodoo Computers, respectively), Mark Kodesh plans to keep Global Night to himself.
A few years ago, Kodesh — a co-owner of Sullivan’s Shutters in Indio who built computers for friends and family — decided to develop a water-cooled computer. “This is something I have a passion for,” says Kodesh, who launched his luxury computer company in August. “My ultimate goal is to take over Dell or Gateway.
“The dream is to push anything as fast as it can go,” he says, adding that a computer’s speed is dictated by the temperature at which it remains stable. “I can make a computer run faster than anything Dell or Gateway can make.” Even manufacturers using water cooling in their top-tier lines use the process only to cool certain parts. Global Night computers are 100 percent water cooled.
“Water transfers heat 30 times more efficiently than air,” Kodesh says. “The first big question is, ‘What happens if it leaks?’” The liquid, he explains, is not water, but rather a nonconductive liquid called Fluid XP that does not damage the electronics. Of course, a Fluid XP-cooled computer sounds too esoteric, even for dedicated video gamers such as Kodesh, who started his project because fan-cooled computers weren’t fast enough to handle games, CAD programs, and other demanding software he used. Additionally, liquid is quieter than a fan.
Global Night’s customized computers run between $3,600 and $8,500 (monitor and keyboard not included). That’s a bargain when compared to the $14,000 price tag Maximum PC placed on its Dream Machine 07.
“Everything they had in it is what I offer,” Kodesh says.
“Cool” describes more than the operating process; it also describes Global Night’s tower case. Plexiglas on the side reveals the tubes that run liquid around the hard parts, and a globe glows from the door. “The original idea was like viewing a hologram,” Kodesh says. He achieved the look with backlighting. For $300, customers can get their case painted red, green, or blue; RGB lights are free.
Kodesh points to one more selling point, especially designed for gamers: “All the new games can play only on Vista [Microsoft’s next iteration of Windows]. When you turn on your computer, it’s a dual boot. You can choose between either operating system.” Now, when Kodesh can also make his computer switch to Mac operation, he’ll be worth hundreds of millions.