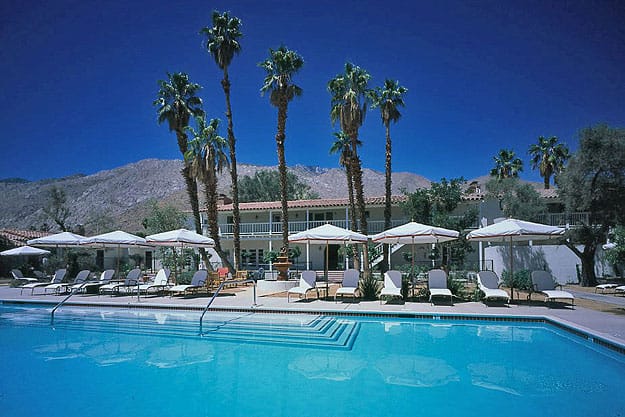 In the mid-1950s, Annie and Dave Margolis acquired the hotel, retaining its famous name; former boxing champion Jack Dempsey bought a 10 percent share. Their guests included a who’s who of Hollywood.

The property changed hands a couple more times in the 1960s and ’70s. In 1999, fitness pioneer and former figure skater Sheila Cluff and her husband, Don Cluff, purchased the hotel. It reopened in 2007 as the Colony Palms Hotel after an extensive renovation in collaboration with Martyn Lawrence-Bullard of Los Angeles. It includes the popular Purple Palm Restaurant, referencing the Purple Gang mobsters associated with the property.

Woodridge, which also owns Hyatt Regency Century Plaza in Los Angeles and Fairmont hotels in Hawaii and San Francisco, reportedly paid $15 million for Colony Palms, but has not disclosed its plans for the property.

Palm Springs again ranks as the least expensive summer destination in California, according to a lodging survey by www.cheaphotels.org. The site specifically compared hotel rates in 30 California destinations for the time frame spanning June through August 2012. Also very affordable are Anaheim, Sacramento, and Los Angeles. Laguna Beach and Santa Monica ranked among the most expensive.