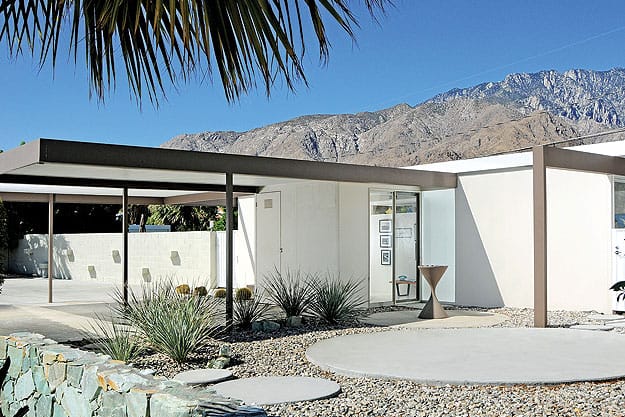 He may be perpetually enthusiastic, but Robert Imber — Palm Springs Modern Tours operator and Palm Springs Modern Committee founding member/board member — seems practically giddy that one of the Steel Houses designed by Donald Wexler and Richard Harrison has been placed on the National Register of Historic Places. The house of Brian McGuire (above) “opens the door” not only for the other six Steel Houses, but also for other midcentury modern architecture in Palm Springs, Imber beams. It is the first midcentury modern structure to achieve the national designation and only the second structure in the city to make the list (the O’Donnell House, built in the mid-1920s, is the other). “There’s a difference between cheap diamonds and the finest diamonds and the Hope Diamond,” Imber says. “Having another layer of important designation absolutely makes a place more valuable.”

If you loved peanut butter and jelly sandwiches as a kid, then you’re going to love what Van Gogh Vodka has done. After 10 years of making flavored vodkas in Holland, the company has introduced its 22nd flavor (counting, as they do, espresso and double espresso as separate flavors). Master Distiller Tim Vos chose the pairing of raspberry jelly and peanut butter for the vodka. The fragrance is predominantly of peanuts, complemented by raspberry; on the tongue, the roles are reversed. Pacifica Seafood Restaurant at The Gardens on El Paseo offers Van Gogh vodkas.
Image courtesy Van Gogh Vodka

Mary Firmin of Rancho Mirage has published “Deadly Pleasures” (iUniverse Publishing). Set in the West Coast among the yacht clubbing wealthy, the mystery involves four women who find themselves intimately involved in a murder case dubbed the “bondage murders.”