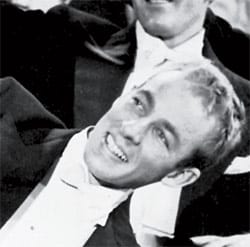 When Norman Borine died the day before his 89th birthday, he was completing a book chronicling his career as a dancer in Hollywood musicals, as well as on Broadway and television. His nephew, Bill Borine, had been working with him on the book in Palm Springs and would not let the project die with his uncle in 2005.

“I had the final manuscript edited by him,” Bill says. “He had proofed everything as far as the text went. I had to finish it.” Bill completed the process of placing photos with the text and getting the book into print.

Dancing With the Stars includes photographs of Norman Borine performing with the likes of Judy Garland in Till the Clouds Roll By, Lucille Ball in Easy to Wed, Yvonne de Carlo in Duel in the Sun, and Betty Hutton in Incendiary Blonde. The text includes anecdotes of working with numerous stars (Garland impressed him most) in the heyday of the big Hollywood studios.

Borine (who for obvious reasons changed his name from Boring upon entering the entertainment industry with MGM) began his career as a contract dancer for $100 a week. He danced his way up to greater positions and $1,000 a week, dancing with Cyd Charisse and serving as Fred Astaire’s “dance-in” for Ziegfeld Follies. In fact, when Astaire’s schedule precluded his attendance at rehearsals, Borine taught him the steps.

Later in life, as owner of The World of Bruce Lee Museum in Hollywood, Norman Borine wrote a biography of Bruce Lee, King Dragon, and traveled on a seven-country tour lecturing on the martial arts actor. A revised version of that book, incorporating an index prepared by Bill Borine and reviewed by the Lee family, is scheduled for release during a tribute in Seattle marking the 35th anniversary of the Lee’s death, June 20. Borine, who lived in Palm Springs for about 13 years and owned the Tiki Palms inn on North Palm Canyon Drive in the 1970s and 1980s, died on Lee’s birthday, Nov. 27.

In addition to the book projects, Bill Borine is cataloging 460 rings that his uncle purchased at an MGM auction in the 1960s, which he will sell, as well as pictures (many autographed) collected by his uncle, and paintings by Alexandra Bokhara, whom his uncle married in 1940 after dancing with her in Ali Baba and the Forty Thieves. Alexandra died in 1985.

Just Fabulous in Palm Springs is holding a Dancing with the Stars book signing by Bill Borine on June 22 from 2 to 4 p.m.
— Janice Kleinschmidt