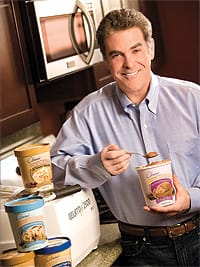 Dip into a sugar-free, low-calorie alternative to decadence.

A doctor’s office should be the last place you’d expect to get premium ice cream, but Jon Gordon’s doctor wants to sell America’s favorite dessert from a freezer in his office. Mind you, this is the same doctor who in August 2006 warned Gordon his glucose level was “through the roof ” and that he had to stop eating a pint a day of the cold stuff or he’d wake up in the morning with Type 2 diabetes.

Unable to find a sugar-free ice cream (even “no sugar added” brands carried 3 to 7 grams of sugar), Gordon “settled for” consuming a carton of sugarfree Popsicles every night. But that didn’t satisfy the commercial real estate broker. In December 2006, he announced to his wife, Candy, that he had gone online and ordered a commercial ice cream maker.

“Selfishly, this was only about me satisfying my needs of having a sugarfree ice cream whenever I wanted it,” he says. Only later did he decide to produce a commercial product. The rollout for Clemmy’s premium ice cream has just begun, starting with such major markets as Kroger/ Ralphs, Albertsons, Stater Bros., Wal-Mart, and Sam’s Club in the West and Southwest, continuing through Texas to the Southeast and up to the Carolinas, as well as in Chicago and New York.

Gordon began experimenting in his Rancho Mirage kitchen after purchasing all the major artificial sweeteners on the market. “Across the board, they had an aftertaste,” he says. Then he came across a natural sweetener called xylitol, made from birch bark and fibrous vegetables and fruits. Although it was expensive, Gordon purchased it 30 pounds at a time. Meanwhile, he was reading articles about the over-consumption of sugar among the populace; that’s when he pursued developing an allnatural, sugar-free, premium ice cream for the mass market.

“That machine must have been going Sundays 12 to 14 hours a day,” Gordon says. “I was getting to bed at 3 a.m., sleeping three to four hours.

“At the end of February, I had a great-tasting vanilla. Shortly thereafter, I hit the coffee [flavor]. Chocolate really became a nemesis. … It would freeze overnight like a brick or would become a pudding.” Finally, in March, he succeeded with chocolate.

Along the way, Gordon sought expert advice. He called the University of Guelph in Ontario, Canada, which teaches ice cream science. He also called a friend who is a lawyer in Los Angeles and got the ice cream (named Clemmy’s after his late cat) trademarked. Then he looked for a manufacturer.

“On a whim, I decided to call Dreyer’s in Oakland and told them I had a frozen dessert product.” Two weeks later, the woman with whom he had spoken told him to expect a call from Yarnell Ice Cream Co. in Arkansas. Gordon recalls Christina Yarnell, whose family had been making ice cream for 75 years, told him, “You’ve done something we haven’t been able to do. All the big companies have tried.”

Within two weeks, Gordon was at Yarnell with his ice cream. The Yarnells were impressed and agreed to produce Clemmy’s, though Gordon is already looking for a second manufacturer. “I know I am going to need more capacity,” he says. He could be right; he’s lined up interviews on Oprah and the three major network morning shows.

“Ninety percent of Americans eat ice cream,” Gordon says. “Ice cream in America is a $22 billion industry; worldwide it’s $59 billion.” Gordon aims to tap into that market with quart-size containers (suggested retail price: $5.99). He’s starting with five flavors (vanilla bean, coffee, chocolate, toasted almond, and chocolate mint swirl) and has a sixth (cinnamon pecan) in the wings. He also has a line of novelties — fudge and ice cream bars, sandwiches, and cups — that he expects to hit stores this summer.

“We believe this will be a great alternative for people that eat Ben & Jerry’s and Häagen-Dazs,” Gordon says, noting that his super-premium ice cream contains 25 to 30 percent fewer calories. Of course, even sugar-free, lower-calorie ice cream can pack on pounds. Gordon swims 20 to 40 laps in the summer and walks in the winter to maintain a 164-pound frame.

Gordon believes so firmly in his ice cream that he hired a CEO (someone who previously ran the frozen-food division of ConAgra), lined up national sales and marketing representation, and took on a major infusion of capital in January.

Clemmy, who lived almost 15 years and whose ashes are in a box in Gordon’s office, would no doubt be proud to know his name and picture grace cartons of what could become America’s favorite dessert. Desert residents know about indooroutdoor living, but Japanese architect Shigeru Ban has a new spin — er, pivot — on retractable glass walls. At his project in New York’s West Chelsea district, 20-foot walls lift out and up. Both ends of the living room open, so catching a cross-breeze is a cinch. Motorized, perforated metal shutters cover the façade for privacy. The Metal Shutter Houses — priced from $3.5 million to $10.5 million — should be ready for occupancy this fall. Alas, most of the condos, including the penthouse (pictured) were sold before the end of last year.

When Irish eyes are smiling, their owner could well be enjoying Jameson Rarest Vintage Reserve, debuting in the United States in time for St. Pat’s Day. Priced at $250 a bottle, the triple-distilled whiskey aged in port casks was blended by four masters: a master distiller, master of whiskey maturation, master of science, and master blender. It is imported by Pernod Ricard USA. If the idea of a thatchedroof, tropical retreat sounds too removed from golf and a private pool, Roco Ki may be the answer. Scheduled to open this fall, the luxury beachfront residences in Punta Cana, Dominican Republic, include hand-woven thatched roofs, infinity-edge pools, rooftop gardens overlooking rugged cliffs and blue sea, the Westin Roco Ki Beach & Golf Resort, and a Nick Faldo golf course. Future phases include a marina, shopping and recreation areas, and more houses. Prices start at $2.75 million. Winning a coveted (and door-opening) endorsement from the Culinary Institute of America at Greystone in St. Helena, the Palm Springs Food & Wine Festival — which premieres March 6 with a media/VIP kickoff at the William Holden Estate, then returns in full force on April 11 and 12 — offers a program befitting a world-class inaugural affair.

“The CIA doesn’t easily lend their name to anybody, so we really had to sell them on the idea that we are professionals that will safeguard their reputation and produce something that’s of the caliber of their school,” says Jeff Hocker, the event’s producer, who will donate a portion of proceeds to the school’s scholarship fund.

Participating chefs such Roy Yamaguchi, Charlie Palmer, and Sara Moulton are CIA graduates, and the CIA affiliation helped Hocker to secure sponsors such as Viking, Fiji Water, and Wine Spectator. Wells Fargo Bank is the title sponsor, and Spa Resort Casino serves as venue and sponsor.

Desert-area and Los Angeles restaurants such as Campanile and Grace also are participating, and Hocker says they will be providing gourmet foods such as caviar bellini and lobster frittata.

“It will be like a Renaissance pleasure faire where you go into different worlds,” Hocker says. For example, Viceroy Palm Springs will furnish a “bubble lounge” with midcentury modern furniture. Piper- Heidsieck Champagne will complement the cuisine.

“The main event will be all about education,” Hocker says. “It’s not just an event where people come up to a table and get a taste.” A cheese distributor will explain how cheese is made, and Fiji Water will educate people on saving rainforests. “There will be kiosks, like an interpretive center,” Hocker says.

Hocker, aiming his marketing to tourists, expects between 1,500 and 3,000 attendees the first year. “It is going to be relatively small and tight and well prduced without going beyond the realm of what we can handle,” he says. “I think this will be one of those events that 10 years from now people will say, ‘Wow, I can’t believe what this has grown into.’” James Egan Teaches screenwriting at USC and has spoken in front of crowds of 500 people, yet the night before he started a class for 25 Marines, he couldn’t sleep a wink.

“I was nervous about living up to their expectations,” says the Palm Springs writer/producer of the documentary Angels in the Dust, which screened at the Palm Springs International Film Festival in January.

Egan teaches Marines wounded in the Afghanistan and Iraq wars how to make movies. The twist is that he’s filming them making their films for a documentary of his own, titled Forget-Me-Not. His students include a Marine who has shrapnel in his brain, another who is blind in one eye, and others with missing limbs and other disabilities.

The classes, which began in December and end right before Easter, take place in a training center for Marines in San Diego. Egan and other professors from across the country teach individual aspects of filmmaking — screenwriting, cinematography, editing — without payment. Other donations provided each student with a camera and computer for editing.

Egan is a member of the national board of the Wounded Warriors Foundation, working to help wounded soldiers develop new job skills. The AFAF Charity Classic rolls to a patriotic start.
Photo by Paul Chasey

Talk about reaching out. The nonprofit American Friends of our Armed Forces is providing prepaid phone cards to Marines stationed in Iraq, enabling them to talk to their families and lifting their spirits. Every year, the organization raises thousands of dollars and secures sponsorships to benefit Marines from the Twentynine Palms Marine Corps Base.

Annually, the organization hosts a golf tournament, with proceeds paying for phone cards, hygiene kits, Thanksgiving dinners, holiday toys, and other items for troops and their families.

“We were able to raise so much last year that this year we extended support to Camp Pendleton [Marine Corps Base],” AFAF President Walt VanBenthuysen says.

This year’s Golf Classic will be held March 10 at The Golf Club at Terra Lago. The entry fee is $295 and includes two rounds of golf, breakfast, a luncheon, two guest speakers, golf balls, a hat and shirt, silent auction, and raffle.