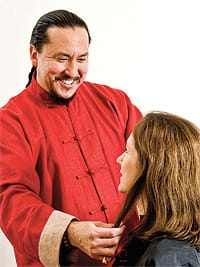 When the ancient Asian art of feng shui crossed the Pacific into American consciousness, its perceived eccentricity triggered reactions from skepticism to mockery. However, a book here, a consultation there, and suddenly Americans found themselves involved in a dalliance and eventual love affair with feng shui principles.

This scenario primed Southern Californians for the arrival of Billy Yamaguchi and “feng shui beauty,” a system of approaching the body in much the same way that we evaluate our space: as an energized entity, influenced by the five elements of wood, water, fire, metal, and earth and capable of remarkable transformation.

Operating on the principle that the body is our true home, Yamaguchi weaves together color theory, intuition, and common-sense advice based on a series of simple yet deeply relevant questions.

“I’ll ask my client for words and colors that encapsulate her personality,” he says. “She may answer ‘vivacious’ or ‘caring,’ both of which tell me a lot about who she is inside, what her element is.”

Once clients identify, both physically and emotionally, with a combination of the five elements, Yamaguchi sets about designing beauty profiles based on their elemental dossier, determining hairstyles, colors, and even necklines that make sense on a holistic level.

“I want people to be conscious of their own natural beauty,” Yamaguchi says. “A lot of people don’t stop to think about themselves, but it’s important for us to understand who we are.”

At his Rancho Mirage salon, Yamaguchi erases years off a mom from Cincinnati, giving her an amber-tinted pageboy reminiscent of a slightly older, eminently wiser Katie Holmes and steering her toward berry-toned accessories and necklines that fall exactly 6 inches below the tip of her chin.

No magic, no trickery or sleight of hand. Just a fantastic haircut and some sound advice from a man with a little more than his fair share of intuition. Hollywood remakes movies all the time, but with new stars. Adam Duplay, an independent producer living in Palm Springs, had no intention of replacing the charming Floyd Shields, but thought the Romance and Sex Life of the Date needed some updating.

The documentary explaining the growth and harvesting of date palms has been showing daily at Shields Date Garden in Indio for decades.

“In the ’30s, Floyd became famous for lectures he gave in the rose garden, two to three times a day, about how difficult it is to grow dates,” Duplay says. “In 1950-51, they started playing an automated slide show with narration played on a loop. It played like that for 40 years. In 1989-90, they made it into a video.”

In the process of preparing a 21st century version of the film, Duplay came across a thousand archival slides, photographs, newspaper clippings, 16mm and 8mm film, and reel-to-reel audio tapes.

“I found a collector of old AV equipment to play this stuff back,” he says, adding that he found another collector with a projector that would accept the “antiquated sprocket setting” of the 16mm film.

“We wanted to give it a feeling of how we respect Mr. Shields,” says Mark Goulet, general manager of Shields, which was purchased three years ago by the Jewel Date Co. of Thermal to perpetuate the local and tourist attraction founded by the late Floyd and Bess Shields in 1924. “We wanted to make a solid film from the perspective of how we saw him coming into the valley and how we saw him succeed in the date business.”

“It really became a labor of love for me,” Duplay says, “because I think what [Jewel is] doing here is great. … I love the contrast of a legitimate, grounded business that has a valid history among the sea of newness that characterizes California and the Coachella Valley.”

The project — which combines portions of earlier images and narration by Floyd Shields with new footage — took two years, one of which was consumed in following the full life cycle of the date. In addition to watching the film, date garden visitors can now buy a DVD of Romance and Sex Life of the Date, which includes the 1954 slide show.

To complement the remake, Shields installed new film equipment, surround sound, and a better screen. The theater seating, however, remains the same. The master suite of the Palm Springs home rented by Elizabeth Taylor in the late ’50s is as large as some houses. With 2,000 square feet, it includes a massive (about 700 square feet), octagonal bath with a marble tub in the center, under a dramatic chandelier. The property, once owned by the co-founder of Universal Studios, went on the market for $9.2 million. www.417westhermosaplace.com

Men with Something to Hide

First there was the man purse. Now there’s The Men Pen — a cosmetic concealer stick in 17 skin-matching tones with a sun protection factor of 18. It comes with a foam wedge, though it can be applied with fingers or tissues. The silver cylinder is a little fatter than a Chapstick, so it fits easily into a pocket — or a man purse.

Although Betty White has appeared on Ugly Betty (playing herself), she bid on a walk-on role in the live auction at the Steve Chase Humanitarian Awards benefiting the Desert AIDS Project. However, Gregg Seller and Brad White (no relation to Betty) of Palm Springs snatched the role for $20,000. “We’re thinking that Betty White might have spiked our martinis before she started bidding us up,” Seller jokes. The salon for men in Palm Desert is American Male’s 14th location in the country. It is located at 36901 Cook St. Information: 674-9600, www.americanmale.com.
Photo Credit: Fred Evans

A salon is typically the last place you’d expect to see customers cracking open six-packs like they were at a Monday-night football game. But at the gentlemen-geared American Male salon in Palm Desert, the experience is all about testosterone. The American Male franchise, which has 13 other locations across the country, is becoming wildly popular for men who want the entire grooming experience without bows and lace.

The athletic-themed salons serve complimentary beverages such as soda, coffee, and even ice-cold beer and have renamed their services to be more male-friendly. Instead of pedicures, the menu offers “foot detailing.” Likewise, hair-color jobs have an alias, so requesting a “grey camouflage” would be in order.

Still, going to a men’s salon doesn’t mean forsaking the great pampering of standard salons. The company is even coming out with their own line of skin-care products designed to fit the needs of its clientele.

“The men of California are in tune with their appearance, and American Male bridges the gap between the grooming services men want and how they get them,” says American Male’s Stacia Stasnek.

Southern California hosts the trends of the moment and the styles of the hour, so it’s no surprise to find American Male making itself at home in our back yard.

“I thought this was really something that the desert needed; there isn’t a male-service salon anywhere around here, and the customer service of American Male is the most comprehensive,” says Tom Wooten, Palm Desert salon owner. “Men are a breed of their own; they do not like going into women’s salons. They can call American Male their own.” Students hustle and bustle around a bulletin board covered with abstract kittens in Mrs. Gordon’s first-grade classroom. These works of art were created as part of a new art program in the Palm Springs Unified School District.

PSUSD’s All-District Art Show debuts this month as a showcase for some of the valley’s young artists (grades K to 12) in an attempt to include the community in their education. Approximately 150 works including painting, photography, and ceramics will be displayed.

“There’s a tremendous student interest in the arts,” says Louisa Castrodale, the district’s visual and performing arts specialist. “We try to expose students to the different varieties of art. When you put that in front of children, it expands their knowledge base and their cultural literacy.”

“I really like doing art,” says Charina Sabado, a fifth-grader in the program at Cielo Vista Elementary School. “We all work on projects together, and it makes school more fun. I want to be an artist when I grow up, maybe a painter.”

Keeping art in public education has sparked an interest in both student and teacher, which evidences the importance of doing so.

“Incorporating the arts into regular educational studies like math and science encourages kids to persist in those subjects by taking off some of that academic stress. More students continue in school and less drop out,” Castrodale says.

The program surpasses the confines of the classroom, as there are after-school programs and guest demonstrations to expose students to different fields of art. Musician Ray Kelley, for example, plays his 1694 Giovanni Grancino cello for students and talks with them about music development.

“It’s a wonderful thing that the PSUSD has a special program that brings music awareness to the students,” he says, nodding and grinning. “Art is something that you take with you your whole life. It opens you to the cultural aspects of society, and that is so important.”

The art show, which includes one work of art per grade level from each school, will be held at the Palm Springs Air Museum on May 24, 10 a.m.-3 p.m. There is no admission fee. Imagine people paying $200 or even $350 to have dinner at your house. “Great!” you think. Now banish the thought of the tidy sum you’d pocket.

Margo Baxley of Rancho Mirage hosted 15 guests on the same evening that 14 other hosts entertained strangers in their homes to raise money for Rancho Mirage Public Library programs. Hosts bore all the expenses, and the library received payment from the 160 people who attended dinners.

“The [hosts] were committed to the library,” says Friends of the Rancho Mirage Public Library board member Kay Bell, and it was left to them to create their own themes. Bell attended the dinner given by Bill Marx, who regaled guests with stories about the Marx Brothers.

Bernadette and Hal Paradis of Palm Desert paid $400 for dinner and a tango lesson at Baxley’s Rancho Mirage house. “We had a wonderful time,” Bernadette says, noting that they chose Baxley’s dinner because, “I enjoy watching Dancing With the Stars …, and I like to watch ballroom dancing competitions on TV.”

Baxley, who has been to Buenos Aires four times, showed guests a DVD she brought home from a tango festival in the Argentine capital and talked a bit about the music before she and three “cohorts” demonstrated the fiery Latin dance. Then she invited guests onto the dance floor. “Everybody got up,” she says. “I was very pleased.”

Although Baxley does not eat meat, she enjoys cooking and wanted to offer guests an authentic Argentine meal, which featured beef tenderloin and malbec wine.

As for Bernadette Paradis, she got more out of the experience than one enjoyable evening. “I feel like I could go out [and tango] without embarrassing myself,” she says. The late Arthur Lyons sought treasures. He struck gold, so to speak, when he discovered the extremely rare, original (1949) Treasure of Monte Cristo. The film is one of three rarities Lyons secured for the Eighth Annual Palm Springs Film Noir Festival (May 29-June 1). The other two are Smooth as Silk (1946) and Appointment With a Shadow (1957) — 35mm prints from Universal Studio’s vaults. The festival pays Universal $300 or 35 percent of ticket sales, whichever is higher, for each film borrowed.

You may not recognize the stars (Glen Langan, Kent Taylor, and George Nader). But that’s beside the point. As Lyons liked to say, “It’s all in the story.”

To create the lineup for each festival’s 13 films, Lyons communicated with his network of collectors and visited the Academy of Arts and Sciences in Los Angeles.

“I look through their books and titles and read the plots,” he explained. “I can tell [whether a film fits the festival] from a plot line and reviews from the academy.”