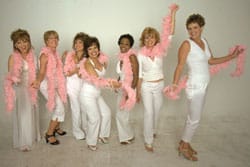 At the end of a photo shoot, most models just want to head home and put their feet up. But at the completion of a day’s shoot in late July, seven models partied in a Cathedral City photo studio, celebrating a project by Budge Brown.
Brown, a co-owner of Tulip Hill Winery (which has a tasting room in Rancho Mirage), is putting pictures of breast cancer survivors on his new Cleavage Creek label. He bought the winery to honor the memory of his late wife, Arlene Brown, and to raise money for cancer research.
“My wife died for no good reason,” Brown says. She had been cleared of breast cancer for five years when they discovered that the disease had metastasized to her liver, brain, and bones.
In October, Brown released his first vintage of eight varietals of Cleavage Creek wine. He is donating 10 percent of gross sales to research into finding a cancer cure. Pattie Daly Caruso and Jane Richins, both of Palm Desert, were among the women photographed for the 2005 vintage.
“Every year, we will pick eight new survivors,” Brown says. Their stories will be told on the Cleavage Creek Web site (www.cleavagecreek.com), where visitors also can see how donated funds have been applied.
“My hope for the first year is four grants of about $10,000 each,” Brown says. But he wants to do more than sign checks. “Hopefully, we can bring inspiration and confidence and information to other women, wherever they are.”
— Janice Kleinschmidt