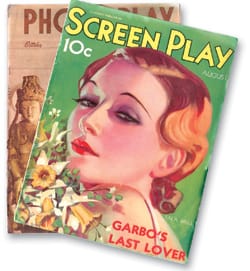 While browsing a Hollywood memorabilia shop, a magazine cover from 1935 caught Pam Price’s eye. “It almost looked like a Rembrandt,” she recalls. “The lighting, the way that she was positioned …”

Twenty-five of Price’s 150 vintage covers, as well as lobby cards and movie ads, are on exhibition July 2 through Oct. 31 at the Rancho Mirage Public Library. Price will talk about the covers during a reception from 5 to 7 p.m. on July 11.

“Of all the magazines in my collection, there are only two men on a cover,” she says. And at that, they shared the coveted position with women: Howard Hughes with Katherine Hepburn and Fred Astaire with Ginger Rogers.

Price stresses that the cover portraits were painted, not photographed. “They were done as a work of art,” she says. “Sometimes, [the artists’] names were on the cover.” As her collection grew, she began to recognize the artists. “I could look at a cover and say, ‘Oh, that’s an Earl Christi.’ They each had their own style.”

After buying a Modern Screen, Photoplay, Motion Picture, Silver Screen, Picture Play, or similar magazine, Price took it to a framer to preserve the image. “Each frame I picked out to enhance the actual cover,” she says. Left with stacks of cover-less magazines, the former art teacher used them to create about 200 collages.

One of Price’s most recent purchases — from one of the memorabilia shops she frequents in Paris — features Greta Garbo (her “all-time favorite actress”) on the cover of a Screen Play magazine. What cost 10 cents in 1931 cost about $60.