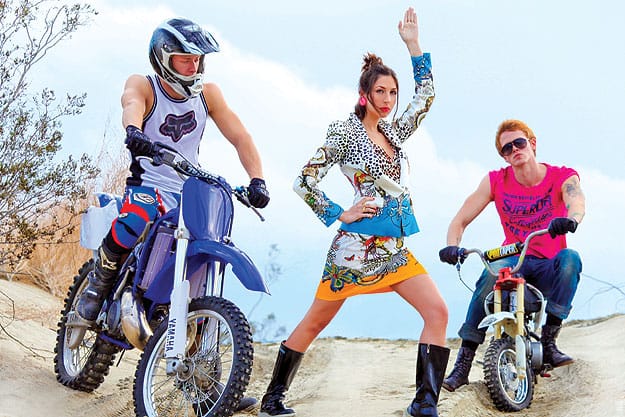 Samantha Ressler is off to the races and gaining speed. Her quick-witted web series, Ladyparts, gained huge fanfare when Zoey Deschanel featured it on her website HelloGiggles, declaring it a BFF. After stints on TV shows like Modern Family and 90210 and a series of webisodes, it seems natural that she’d zoom to the big screen. Next month, she’ll appear alongside Seth Rogen, Emma Stone, James Franco, and Rhianna in the apocalyptic comedy This Is the End.

What is a webisode?
It’s television for the web, but more importantly, a realistic platform for actors to get their work out there. The reason we decided to pursue a web show was so we could create our own material, with full creative control, and make it accessible to everyone all the time.

What do you like on YouTube?
I love Web Therapy with Lisa Kudrow. There is an amazing webisode that Meryl Streep did on the show that is a must-see. Also, if you need a good laugh, watch a few episodes of Michael Cera’s Clark and Michael and Lena Dunham’s Delusional Downtown Divas. They will crack you up.

What was it like getting intimate with James Franco in This Is the End?
I met James about five seconds before filming, and our introduction was a rehearsal where he puts his arm around me. Like any warm-blooded American girl, I was nervous, but luckily acting like I had a crush on him wasn’t too hard. As it turns out, the director, Seth Rogen, was rolling during the rehearsal so perhaps my real-life swooning will be evident.

How do you describe your sense of humor, and what really makes you LOL?
I’m a sucker for a funny fall. Lucille Ball and Carol Burnett mastered the combo of comedic timing and physical follies, and they both make me laugh to this day. Basically, if someone has the potential to get injured, I will inevitably find it funny. (I’m not proud of it, but you asked.)

What is something ironic about the desert?
It’s totally not dry! It’s in constant bloom with hipness and dripping with trendy shops and restaurants. It inspired me to write a Coachella-esque scenario, where our characters in Ladyparts (Jane and Miller) try to manipulate their way into some hip parties and get brutally rejected.