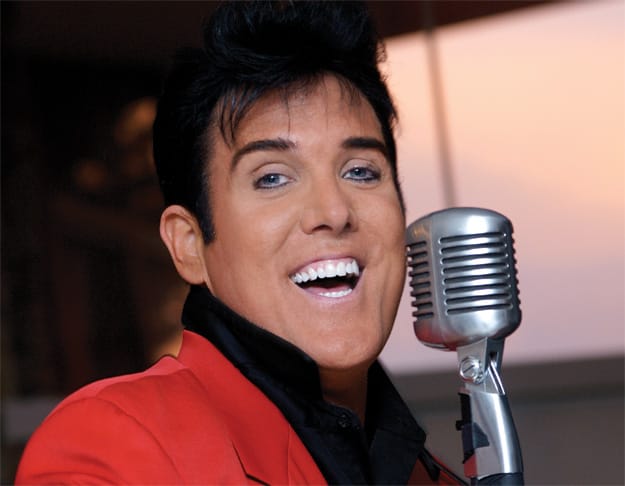 On Aug. 16, when Elvis Presley fans around the world pay tribute to the King on the 33rd anniversary of his death, Scot Bruce of Palm Springs will be shaking his hips before a sell-out crowd at the ASF Performing Arts Center in Montgomery, Ala. The first clue that Bruce, who has appeared as Elvis in music videos with Faith Hill and Sheryl Crow (and performed at the Honeymoon Hideaway in Palm Springs), could make a living as an Elvis tribute artist came after he joined a rockabilly band and changed his hairstyle from an 1980s mullet to a 1950s-era pompadour. “It was then,” he says, “that people started telling me that I kinda looked like Elvis.”

How much of the year do you travel?
With the exception of a one-weekend-per-month gig at Disneyland in Anaheim, I travel outside of California almost every weekend — flying out on Thursday and back to sunny Palm Springs on Sundays. I work overseas once or twice a year. This spring, I was in Finland and Sweden for a short tour. I also perform in Japan regularly, and I have toured Australia, Malaysia, and Brazil in recent years.

When you’re not dressed as Elvis, do people say, “Hey, did anybody ever tell you that you look like Elvis”?
I am asked that question often. I keep my hair dyed jet black, which sort of makes me a “walking billboard” for what I do. I wear a cowboy hat during the day, but it still doesn’t detract from the Elvis thing. Those sideburns are a dead giveaway.

Which is more difficult to perform: young Elvis or Vegas Elvis?
As Elvis matured, he learned breathing techniques that broadened his vocal range. He became a much more powerful singer, and he recorded songs that not only challenged him as a singer, but highlighted the fact that he could really belt it out. To answer your question: Vegas Elvis.

Do you find yourself saying things like, “Thankyouverymuch” in normal conversation?
Ha, ha! Not yet, anyway. Honestly, it can be easy to lose one’s identity in this crazy tribute/look-alike business. It has always been important to keep who I am in perspective and be as respectful as possible toward Elvis and his image. I’m a musician/actor who, as a huge fan, pays tribute to the King in a live musical concert. When the show is over and I hang up the gold lamé jacket, I also “hang up” the character. What remains is an extremely grateful guy named Scot with dyed-black hair and a cowboy hat.