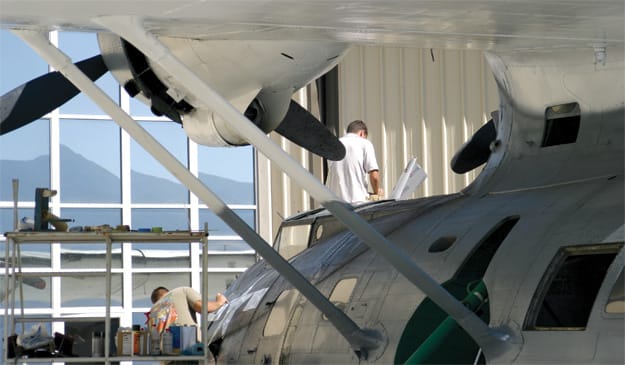 With the title “chief mechanic,” you might think Matt Voight spends all his time tinkering with, well, mechanical stuff. But at Palm Springs Air Museum, he’s digging into paperwork and playing private eye.

Voight and his team have been culling together the history of a PBY (patrol bomber) plane while restoring it.

“It’s rare that you actually find an airplane that served in any theater of World War II,” Voight says, noting that many museum planes never made it overseas. Furthermore, the air museum’s PBY served in the Aleutian Islands. “There are no [other] flyable Aleutian Campaign planes in existence,” Voight says. It also flew search-and-rescue missions in Alaska.

The museum acquired the plane in July 2007 after board member Howard Bernstein, who had flown a PBY during the war, raised money to buy it. After serving as a commercial airplane and then as a firefighting plane, the PBY sat idle for 15 years in Moses Lake, Wash.

The mechanics’ work began before the plane was even flown to Palm Springs. They scoured Navy records and “put feelers out on the Internet,” Voight says. “The day before we were going to bring it back, somebody called and said they had it listed in their logbook.” That person, Ken Claypool, showed up the next day from Carlsbad and brought photographs of his squadron’s planes.

While cleaning old paint from the interior, the mechanics found handwritten notes, from which Voight tracked down Bob Buchanan, who had a list of 55 crew members from a reunion about eight years earlier. Voight reached 20 crew members and 20 family members of deceased crew members. On four occasions, those people have come to see the plane; and Voight has obtained 11 logbooks representing nine of the 18 crews to fly the plane.

When restoration is complete, the PBY will take to the air again — this time for demonstrations in the skies above Palm Springs.