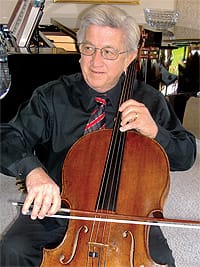 This month, the entire nation can share in their experience by tuning in to A Holiday Celebration at Ford’s Theatre, airing on ABC. The taping of the show in June involved machinegenerated snow, holiday decorations, folks dressed in winter attire, and the Secret Service. Attendees included the President and First Lady, as well as members of the Senate and Congress

“It was a career highlight for me to perform before such a distinguished audience,” says Ray Kelley, who has played cello in recording sessions for Neil Diamond, Paul McCartney, and Barbra Streisand. As first cello in the orchestra, Kelley also performed a solo with Olivia Newton-John.

Kelley, who plays a 1694 Giovanni Grancino cello, enjoys more career highlights than most people. He plays principal cello for The Simpsons TV show, played in the string orchestra for Bob Hope TV specials from 1975 through 1996 (Hope’s last special) and for the Andy Williams and Glen Campbell shows; and performed for five years with his father and brother in the Los Angeles Philharmonic. (His father played with the philharmonic for 48 years, 30 as principal string bass. His brother, who also plays string bass, is the phil’s oldest member in age and seniority.

But Kelley’s heart lies in Palm Springs, where he founded Resort Music Inc. (which also has offices in Berlin). It began with a simple concept: Counting himself among musicians who play for movies and advertisements, he says, “All we do is work on things that promote everybody else. Why not a city?”

So in 1988, he produced a CD titled The Palm Strings. He has since produced “destination” music for Chicago (Sears Tower has its own version), Wisconsin, Florida’s Space Coast, and Marriott Casa Magna Mexican resorts. Cheryl Kelley — whom he has known for 30 years, worked with for 20 years, and been married to for 3 1/2 years — produces the souvenir liner notes with pictures, descriptions of attractions, and maps. They are currently working on a CD for Shanghai World Expo 2010.

Chicago remains the Kelleys’ biggest customer, having purchased 100,000 CDs and continuing to place orders for more. Destination CDs are used in tourism promotions and gift bags. “It’s a reminder of where people were when they heard [the music],” Cheryl says. In fact, more than 100 titles of the all-instrumental music can be heard in background music systems on five continents. Most of the songs are original pieces, though a couple of standards could hardly be overlooked, i.e., Chicago/My Kind of Town and On Wisconsin.

“The whole idea was to promote Palm Springs internationally,” Ray says, noting that when he is interviewed on radio and television, he talks about Palm Springs “and how it all started.” His musician friends have told him, “You’re a really good cello player, but you really should be a lobbyist.” — Janice Kleinschmidt

TAILS OF THE CITY

That poodles, bichon frisés, and Pomeranians are among the top 10 most popular dog breeds for gay men should come as little surprise. But which is best for what type of gay man?

Andrew DePrisco tackles that question in Woof! A Gay Man’s Guide to Dogs (BowTie Press, 2007). A dog trainer and author of more than a dozen dog books, DePrisco classifies gay men into 28 categories and then suggests the best 10 to 12 dog breeds that suit each temperament and lifestyle. BowTie is best known as the publisher of the venerable Dog Fancy and Cat Fancy magazines.

A TOUCH OF MAGIC

Michael Lansing is watching his customers age — which is to say, the owner of Gameroom Gallery in Thousand Palms has recently sold more high-tech entertainment products to older consumers than ever before.

According to Home Instead Senior Care in Palm Desert, people past their prime are turning to electronic gadgets typically reserved for younger generations in order to keep their minds active. A survey last year by PopCap Games of Seattle revealed that 47 percent of those who downloaded its video games were older than 50.

Lansing says one of the reasons for the increased popularity of electronic games among older people is touch-screen technology. He has sold Game Time — a portable, flat-screen device — to folks in their 80s. Game Time offers some 125 games: everything from crossword puzzles and Sudoku, card and word games, chess, trivia (80,000 questions), and tennis to something called Monkey Bash that Lansing indicates is addictive. It also includes a Kid’s Club with such child-friendly delights as electronic finger painting. So 2-year-olds, their parents, and their grandparents can share the same “toy.” In fact, up to four can play miniature golf together on one Game Time. When customers have exhausted the hundreds of game options, they can get a new set uploaded through the Internet.

Lansing says producer Jerry Weintraub gave Game Times to the actors in his films Ocean’s Eleven and Ocean’s Twelve. Hey, if it’s good enough for Brad Pitt and George Clooney … Another Gameroom Gallery top seller for people from their 40s to 80s is the Rock-Ola Nostalgia Music System. Even at $7,000, Lansing can’t keep the multicolored, bubblersided, touch-screen jukebox on the floor. The jukebox is styled after Wurlitzer’s 1940s-era Rock-Ola, but is all new technology inside. Owners can load up to 3,000 CDs into the jukebox and create a dozen play lists. “I have had up to 16 hours on a play list,” Lansing says.

To upload music into the Rock-Ola, you connect the jukebox to a computer, slide in a CD, and the jukebox finds the original album artwork and play list. But, Lansing says, the jukebox connects more than CDs and album covers.

“The kids come over and hook up their iPod in the docking station and now think, ‘Grandpa’s really cool, because I can play my music on his jukebox.’” — Janice Kleinschmidt

He Sells The Songs

If only Queen Victoria were alive. Rumored to have enjoyed a daily dram of Scotch in her tea, she would no doubt appreciate The Glenlivet Cellar Collection 1969. After nearly 40 years of aging, the single-malt scotch is available in limited release (800 bottles in the United States, 1,200 in Taiwan and Europe). Priced at $750, each bottle is numbered and comes packaged in a solid ash frame adorned with leather and brass. Glenlivet notes that a splash of water will release the whiskey’s flavors and aromas — no word how it fares with tea. Their outfits reveal that it was a sunny, warm day in Palm Springs as these spirited young women wrapped presents to place under the Christmas tree at El Mirador Hotel in December 1967. Photo from the Palm Springs Life Archives.