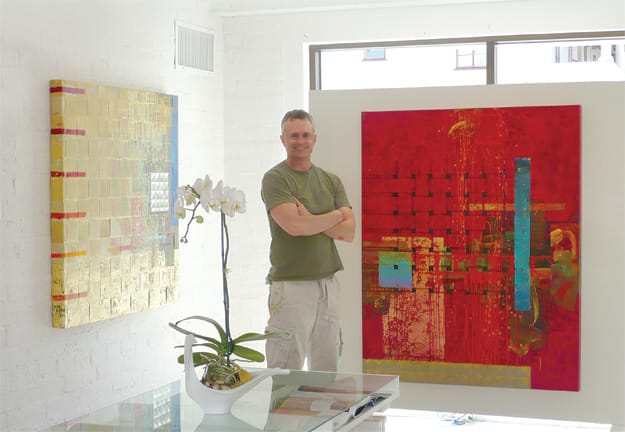 During a visit to Palm Springs from his Milwaukee home, Peter Mahler found his first house in the Las Palmas neighborhood. He was 15. “I told the owner I wanted to buy it,” he recalls. Seven years ago, his dream came true.

Though Mahler still lives most of the year in Milwaukee, he’s made a second investment in Palm Springs — with a group of co-investors in Los Angeles: El Paseo Plaza at 800 N. Palm Canyon Drive.

“We bought it at the end of December 2005, spent a year in plans and architectural and historic preservation review [the site dates to 1926], spent 2007 in building and renovation, and 2008 leasing,” Mahler says. Artist James Jensen, the first tenant to open, attracted a large crowd to his opening exhibition in February. A week later, Design Within Reach opened a furniture showroom and Annex.

“We actually started talking with Mr. Mahler in November or December,” says Matt Wilkerson, vice president of the San Francisco-based company. “We opened very quickly because we wanted to be able to take advantage of people coming in for the Modernism Show.” In fact, DWR donated 10 percent of proceeds from its first 10 days of business (a little more than $5,000) to Modernism Week.

Rumors had circulated for some time that DWR was opening a location in the Coachella Valley. The renovation by Los Angeles architect Mark Rios sealed the deal.

“The building was really appealing,” Wilkerson says. “We love historical properties and buildings that have an adaptive reuse.”

The location is DWR’s 71st nationwide and only the second Annex, which sells evaluation samples, photography samples, and customer returns at discounted prices. The nearest DWR location is Pasadena, and the only other Annex stores are in Secaucus, N.J., and Cleveland, Ohio.

“Palm Springs is one of the most engaging communities that I have ever gotten to spend time with,” Wilkerson says. “People have been so supportive.”