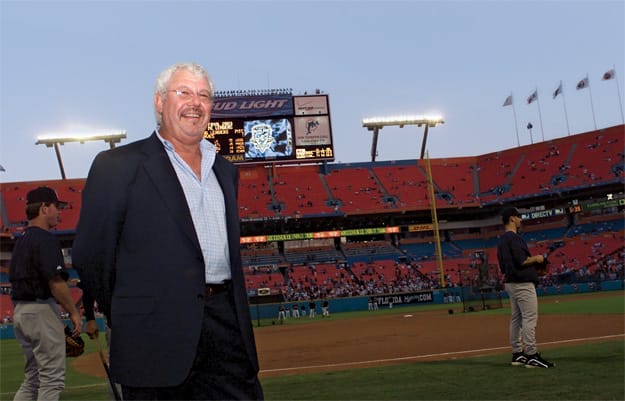 When football fans gather to watch Super Bowl XLV (Feb. 6), David Hill, a part-time Palm Desert resident, will have a different vantage point. As chairman and CEO of Fox Sports Media Group and president of Fox Sports Networks Inc. for the past 18 years, his decisions and innovations will affect hundreds of millions of viewers. The native Australian — who has houses in Pacific Palisades; Hyannis Port, Maine; and Bighorn Golf Club — also works with the NFL on the popular halftime show.

You are known as a successful risk taker. Who instilled that quality in you?
My great inspiration in sports television was and is the late Roone Arledge, who at ABC’s Wide World of Sports created the look and feel of what sports television is today. I have always approached every situation as ‘How would Roone handle it?’ Starting from that premise, one idea leads to another, and you hopefully end up with something that makes for a better viewing experience. It’s vital that television changes. It is successful only if it remains relevant to consumers; as society shifts and changes, so must television.

What has been your most successful innovation? Any you regret?
My best innovation was placement of the time and score in the corner of the screen. I faced massive criticism when I introduced it. It was mocked and derided, and my sanity was called into question. Every sport in every corner of the world has the constant score and time now — guess I should have copyrighted it. My next innovation was the first-down digital marker in football. I’ve got two animated characters. The one that worked is Digger, the NASCAR gopher; the one that didn’t was Scooter, the animated baseball that described various pitches for kids. Digger took off and now sells a bunch of merchandise. Scooter is off taking a vacation somewhere.

What about you would surprise most people?
Everyone asks me if I’m a huge sports fan, and I’m not. My great love is television, and I think the marriage of television and sports is as good as it gets. It has kept me addicted for decades and shows no signs of lessening its hold on me. Ask my kids, and they’d tell you about my great passion for Roman history. I think ancient Rome is the most fascinating topic, and I’ve been known to bore dinner parties rigid with my views.

What about living in the desert gives you the most pleasure?
There is some quintessential thing about the desert that you can’t find anywhere else: tranquility, sereneness, spirituality, or all of the above. If there’s something I need to figure out, sitting in my study and looking out of the window does something positive to the brain, and inevitably everything sorts itself out.