Public Art Has Transformative Power in the Coachella Valley 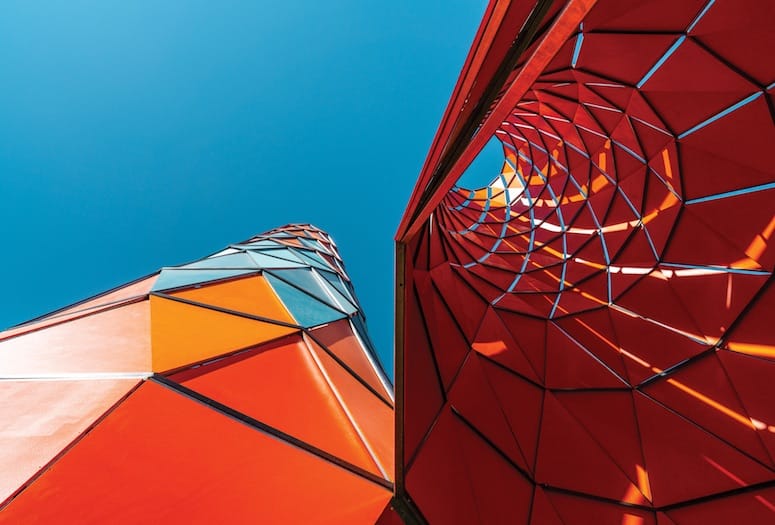 For the Coachella Valley Music and Arts Festival, Berlin-based architect Francis Kéré created teepeelike structures that soar up to 60 feet tall. Some could be permanently installed in the East Valley.
PHOTOGRAPHS BY LANCE GERBER

Let’s not debate whether Forever Marilyn — Seward Johnson’s 26-foot-tall, crudely rendered sculpture of Marilyn Monroe in her updraft white dress from The Seven Year Itch — qualifies as art. We’ll give it the courtesy, considering the iconic figure went viral and gave people a reason to come to downtown Palm Springs from 2012 to ’14, when redevelopment was so painfully slow that it actually repelled visitors. Restaurateur Harold Matzner and hotelier Aftab Dada had the bright idea to install the larger-than-life public art sculpture on the busiest corner of town, Tahquitz Canyon Way and Palm Canyon Drive. And Palm Springs started coming back to life.

“When you place art in a community, that snowballs into other benefits, which can be economic and cultural. Art and design are powerful ways to transform a community.”

Good examples pop up all around the country. A visit to Chicago, for instance, would be woefully incomplete without marveling at “The Bean” — aka Cloud Gate, the stainless steel sculpture by Anish Kapoor — in Millennium Park. Even temporary installations, such as The Gates by Christo and Jeanne-Claude in New York’s Central Park circa 2005, have dramatic and long-lasting impacts wherever they are sited. 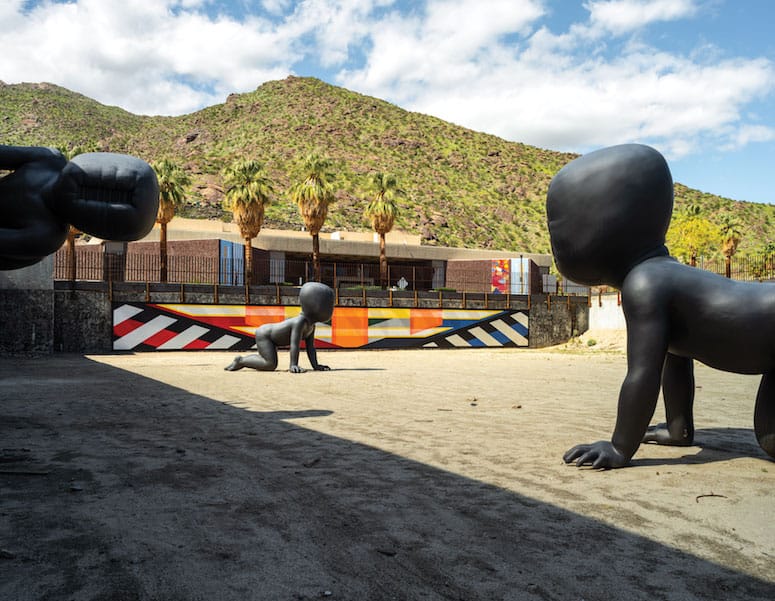 Cathedral City, Indian Wells, Indio, La Quinta, and Palm Desert also have robust public art programs, funded mostly through development fees. But the city of Coachella has been experiencing a renaissance in the last five years, and its public art is turning it into a bona fide cultural destination.

In 2014, artist Armando Lerma launched Coachella Walls, a mural project that gained city council support to invite 14 artists from near and far (as distant as Brazil) to paint the exterior walls of local businesses in Coachella’s historic downtown Pueblo Viejo district. The murals reflect themes of importance to the city’s population, which is more than 95 percent Mexican.

“I started Coachella Walls as a way to bring traffic to Coachella,” says Lerma, who painted the first mural with his former collaborator, Carlos Ramirez, to commemorate the 1965 grape boycott. “[The mural project] had to do with the Coachella music festival. All these people come for the festival, but nobody was coming to [the city of] Coachella. It was my attempt to get people to check out my part of town. This is the part of Coachella where there was  business 20 or 30 years ago. It’s a cool little town. It’s like stepping back in time.”

“At first, I didn’t like the location because it was secluded ... but it surprised me, and I’m glad I was able to paint there. the location lent itself to those images.” 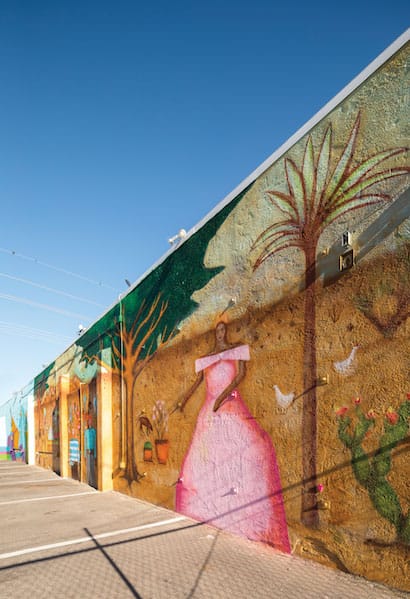 About a year later, festival promoter Goldenvoice invited Lerma and Ramirez, then known as The Date Farmers, to create an installation for the 2016 event. Their sculpture depicted figures drawn from their popular paintings and murals, and they called it Sneaking Into the Show. “The festival is expensive,” he says, referring to ticket prices now starting at more than $400. “The only way we’re going to get in is to sneak in. The title added that layer.” The sculpture now lives at a tire shop on Grapefruit Boulevard.

Lerma has painted several murals of various scales in Coachella, two of which were commissioned by Desert X, the exhibition of site-specific art that sprawls across the Coachella Valley during odd-numbered years. In the inaugural show, in 2017, La Fiesta en el Desierto drew busloads of visitors to El Tepeyac, a piñata and candy store on Grapefruit Boulevard between Sixth and Seventh streets. For the second iteration of Desert X, earlier this year, he painted Visit Us in the Shape of Clouds on a water tank near Coachella Valley Compost off Dillon and Landfill roads. Using his familiar iconography — a parrot, a snake, a monkey, a fish, a genie, a clown, and a few kachina dolls — Lerma created his largest painting yet. “At first I didn’t like the location because it was secluded, and the first time I went out there, the dirt road leading to the site was washed out,” he says. “But it surprised me, and I’m glad I was able to paint there. The location lent itself to those images. Once you pass [the landfill], it’s paradise. It’s a beautiful place.” The mural, which issues a subtle plea to protect the desert’s water supply, remains accessible to the public.

Lerma, 44, grew up on a nearby ranch and discovered art by flipping through his parents’ encyclopedias. “I was like a cultural orphan,” he says. “I learned about art on my own. The murals are really for the young people, to give them something to look at so they don’t feel the way I did.” 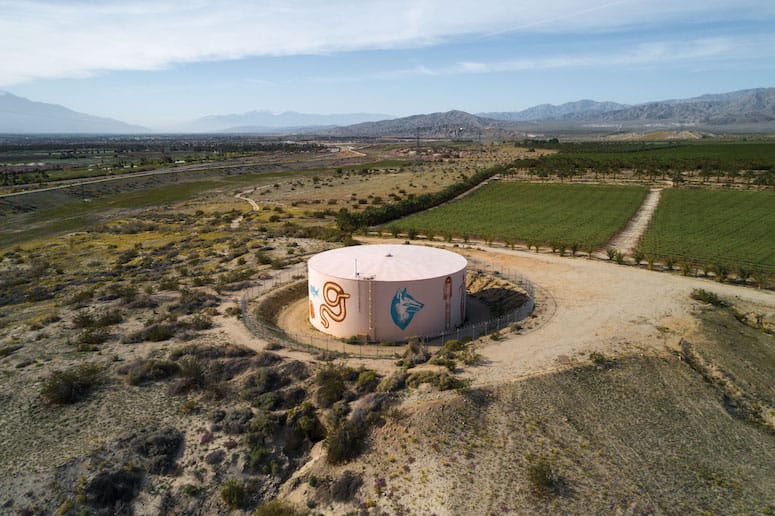 Desert X commissioned Coachella-based artist Armando Lerma to paint Visit Us in the Shape of Clouds ­— a subtle plea to protect the desert’s water supply — on a water tank off Dillon and Landfill roads.

Golden voice has been re-siting gigantic festival artworks to East Valley communities for years, starting with a trio of sculptures by Don Kennell: a bear at Shady Lane Park in Coachella, a dog at Avenue 48 and Hjorth Street in Indio, and a roadrunner in the traffic circle at Jefferson Street and Avenue 52 in La Quinta.

However, its latest installation, Etherea, at the corner of Cesar Chavez and Sixth streets in Coachella, garners appreciably more attention than the others. To accommodate the 54-foot-tall sculpture by Italian artist Edoardo Tresoldi, the city turned an empty lot into a public park where the community and tourists can stop and enjoy it.

Inspired by neoclassical and baroque architecture, the translucent wire-mesh structure offers a surreal experience that changes with the light and atmospheric conditions like wind. “I wanted to conceive a playful and dedicated place for the contemplation of the sky,” Tresoldi says. “I’m glad that part of Etherea has been permanently placed in the city — a new public space for the community to create connections between different cultural heritages.” (The installation at the festival grounds included three structures of different heights.)

The placement of Etherea helps the city to “pull downtown out to Cesar Chavez,” says Raffi Lehrer, associate art director at Goldenvoice. “The city has done an amazing job. They have a clear understanding of how art can aid in urban renewal.

“When you place art in a community, that snowballs into other benefits, which can be economic and cultural. Art and design are powerful ways to transform a community.”

Goldenvoice, producer of the Coachella festival, arranged for Edoardo Tresoldi’s 54-foot-tall sculpture,  Etherea, to be installed long-term at the corner of Cesar Chavez and Sixth streets in the city of Coachella. 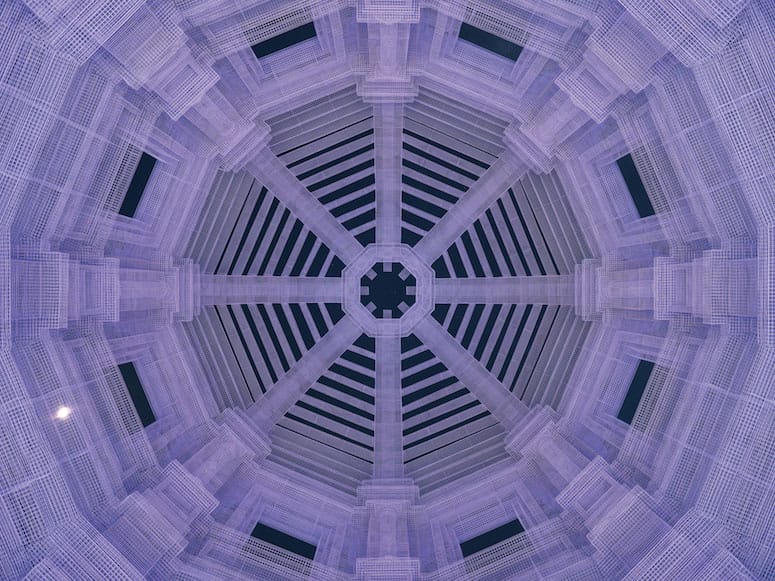 Inspired by neoclassical and baroque architecture and constructed with translucent wire mesh, the stunning Etherea sculpture changes with the light and atmospheric conditions.

“I’m glad that part of etherea has been permanently placed in the city [of coachella] — a new public space for the community to create connections between different cultural heritages.”

To that end, Goldenvoice commissioned a couple of this year’s festival artists to build works for a potentially permanent installation. Among them are elements of Sarbalé ke (“the house of celebration”) — 12 colorful towers referencing the baobab trees of architect Francis Kéré’s native West African village of Gando, Burkina Faso. “In my culture, the baobab is the most important tree,” he says. “It’s giant, and it has multiple uses as food and medicine. It’s the place where you get together, celebrate, and discuss. It also attracts animals. You naturally walk toward it.”

Kéré’s teepeelike structures soar up to 60 feet tall and exude the same welcoming appeal, providing shaded gathering spaces. Lehrer says Goldenvoice is in talks to site part of the installation.

Chicago’s Bean and Coachella’s Etherea share an ability to unite people from all walks of life with public art, striking a universal chord and resonating.

“People often say we need to celebrate our differences, and I think that’s true, but I would say that even more than ever it’s important to celebrate those things that are common, the things that unify us no matter what we bring, where we live, or what we believe in,” says Phillip K. Smith III, who created two monumental works for the Coachella festival (Reflection Field in 2014 and Portals in 2016) before mounting The Circle of Land and Sky for Desert X in 2017. “I am interested in projects that bind all of us together as human beings.”

• See related story: Where to Explore in Coachella.

Smith’s work draws on the subtleties of light — inspired by the continually changing colors of the nearby mountains, the daily sunsets, and shadows moving across the desert floor — and uses sculpture to harness and reveal their “pure beauty.”

“Quite often, artists turn to the beauty of nature or the sky, because no matter where we live on this earth, the one thing that is absolutely common is the sky is over our head,” he says. “There’s a desire to see and remember. It’s like standing on the edge of the Grand Canyon.”

Greater Palm Springs seems to “get” public art, and with big thinking coming from public art commissions, city halls, and events like Desert X and the Coachella music festival, it appears bigger and bolder art, permanent and temporary, will continue showing up around the valley for years to come — possibly including the return of Forever Marilyn. 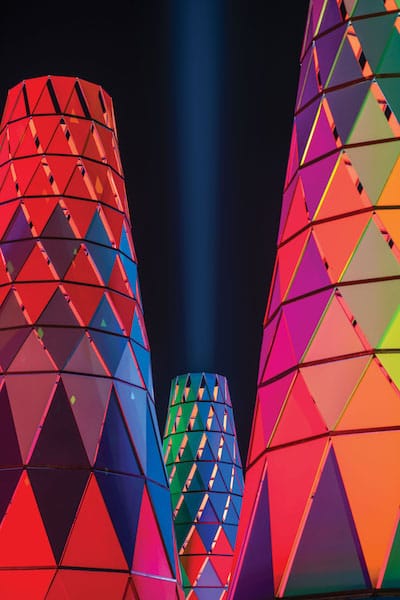 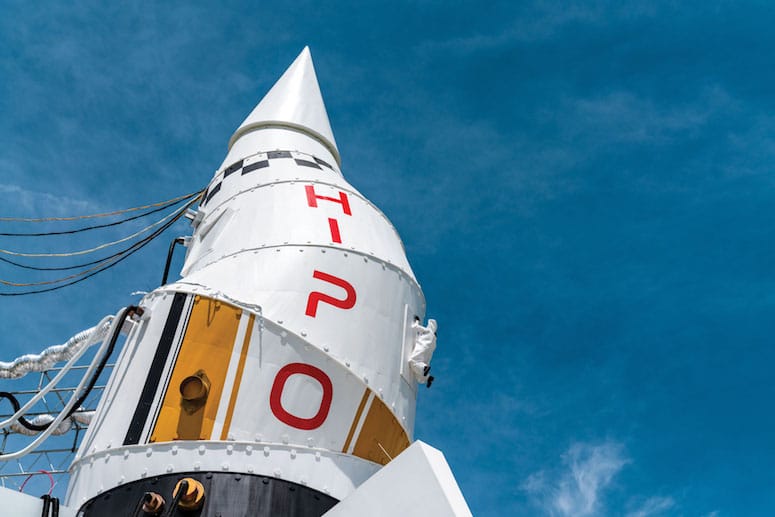 WHERE TO SEE THE ART

Let Them Grow by Armando Lerma

Visit Us in the Shape of Clouds by Armando Lerma