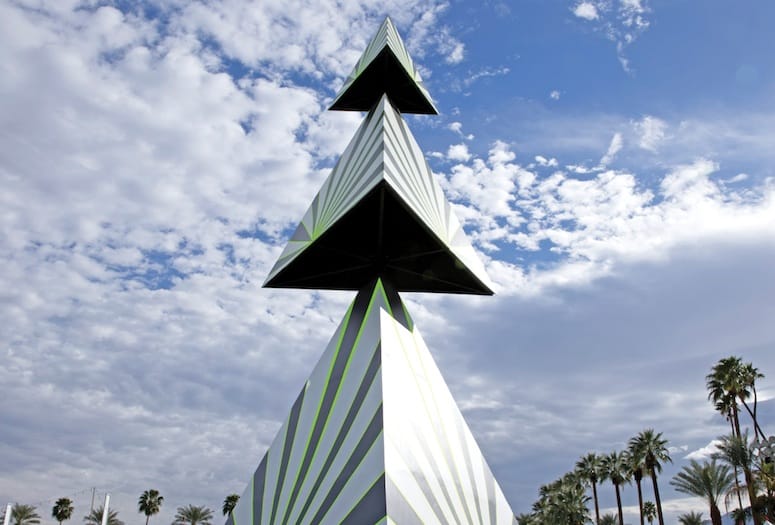 Artists know when they find the perfect groove. They seize the moment and push it as far as they can possibly go. Everything else in their lives suffers.

Chris Sanchez is in one right now, imagining and creating one project after another, aware the sum of his ideas — drawing from street art, land art, light and space, minimalism, and hard-edge geometric abstraction — is coalescing into a singular vision. His work manifests as paintings, sculpture, and light installations, often encountered on the land, from the manicured grounds of Empire Polo Club to the crevasses of Box Canyon, rather than in a gallery. And it’s almost always fleeting, here today and gone tomorrow, enduring only in photography and video documentation.

“I’m interested in creating iconic images,” says the 27-year-old Coachella artist who works under the name Kas Infinite. “I’m trying to make good, honest work that connects to the bigger picture. These are meticulously planned-out projects.”

Sanchez installed his first large-scale work, the 30-foot-tall, black-and-white-striped Optical Beacon, at the polo club for the 2016 Rhythm Wine Brews Experience. This year’s sequel was a 25-foot-tall sculptural painting consisting of a diamond-shaped structure atop a pyramidal base. 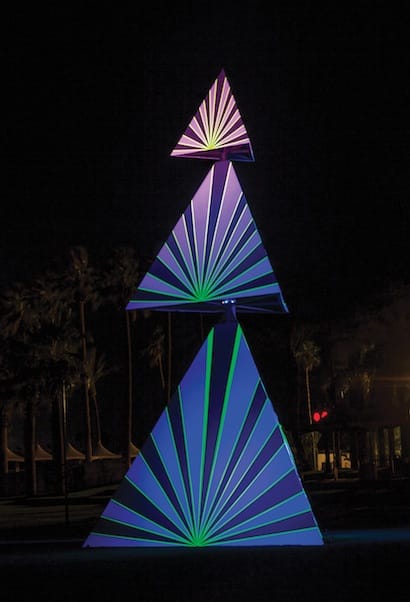 PHOTO COURTESY OF KAS INFINITE
…and became an UV-illuminated spectacle by night.

These and other works share three distinctive traits: the pyramid, graphic motifs that trace to Mexican sarapes, and ultraviolet light that transforms them at night. “I had an instinctual connection to [the sarape] and gravitated to it,” he says of the traditional blankets originally worn like a poncho. “As I got older, I began to understand they go back a long time.” He also gives fresh context to the pyramid, another ancestral icon. His challenge was imagining how to use the primitive forms in a minimalist way to encompass the space.

“He exceeded the expectations of the project,” says Cristopher Cichocki, an Indio-based artist who curated the installations for RWB. “I continued to work with him, and our relationship kind of grew.”

Cichocki, founder of Epicenter Projects, invited Sanchez to participate in Faultline, an event where sound artists from L.A. “activated” the Painted Canyon in Mecca. He responded by wedging 8-foot-long minimalist light sculptures into the craggy nooks of the mountains, a hybrid of guerrilla land art and light and space.

“The environment has a big influence on my work,” Sanchez says, noting the landscape becomes a part of his work through the documentary imagery. “I’ve been living here my whole life. It’s an isolated mindset. I remember being on my grandfather’s ranch and there was a certain silence and solitude, so bare and meditative. That’s very attractive.”

Sanchez uses light like a painter in order to create a compelling gesture on the surface. “I understand the movement, the abstraction,” says Sanchez, who exhibited his first sculptural light paintings, made of steel, acrylic, and aerosol paint, in 2014 at Coachella Valley Art Center. “Light is a phenomenon. The way you approach it is very meticulous.” 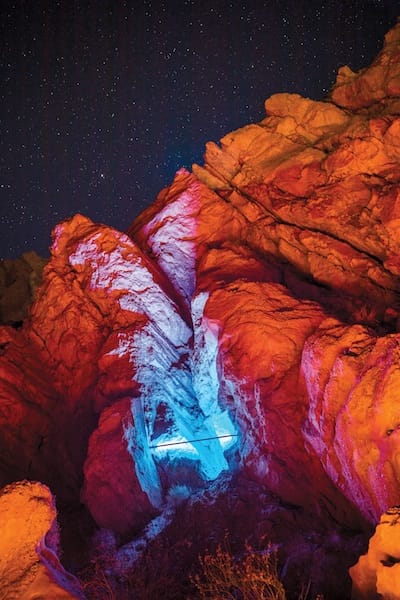 The Painted Canyon intervention triggered a series of studio works: minimal steel structures, each about 8 feet long, an inch wide, extending 5 inches off the wall, and backlit to create a gradient light field bisected by a solid line. “I wanted to see how much I could take away [from an earlier light-painting concept], stripping it down to its core,” he says. “It connects to the light and space artists, but there are new things to be discovered. I’m interested in that exploration, the unseen territory, and the mystery within the work.”

There’s a humble confidence about Sanchez that comes not only from his own talent, honed and encouraged since he was in middle school, but also from knowing that artists he admired growing up, particularly the Date Farmers and Phillip K. Smith III, have achieved a measure of success. They showed him a path. His first steps after graduating from La Quinta High School in 2007 were working as a screen printer, becoming obsessed with the power of graphic design, and establishing his own studio practice. 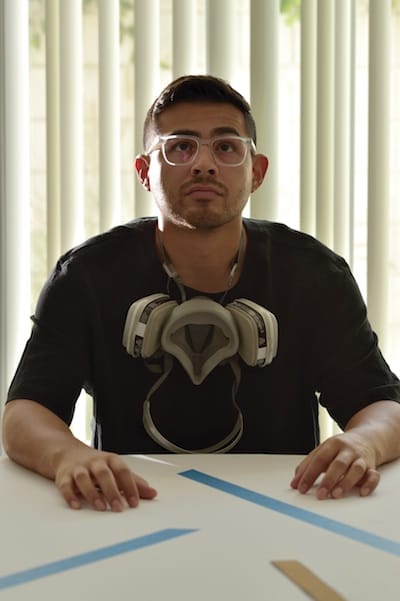 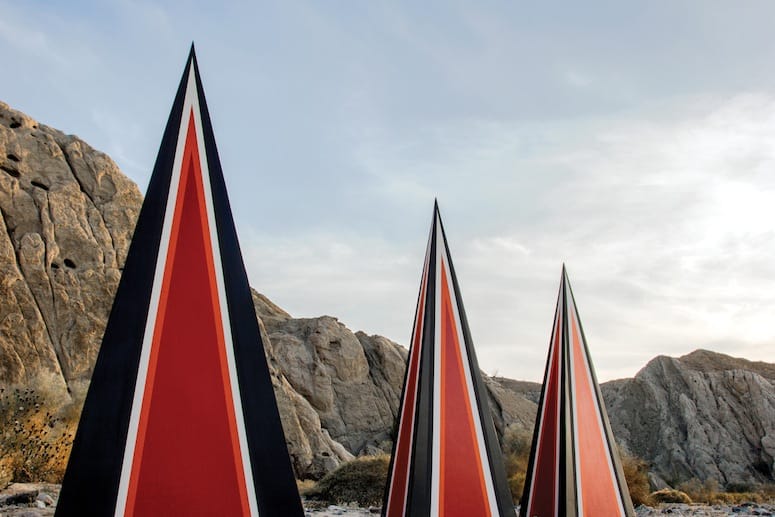 PHOTO COURTESY OF KAS INFINITE
In guerrilla-style installations like Pyramid Procession in Box Canyon, the landscape plays a vital role in documentary imagery. 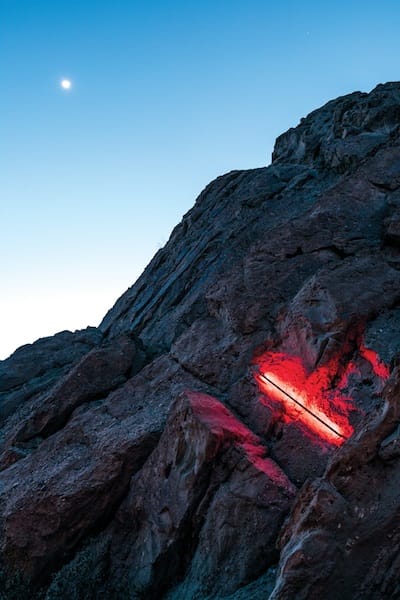 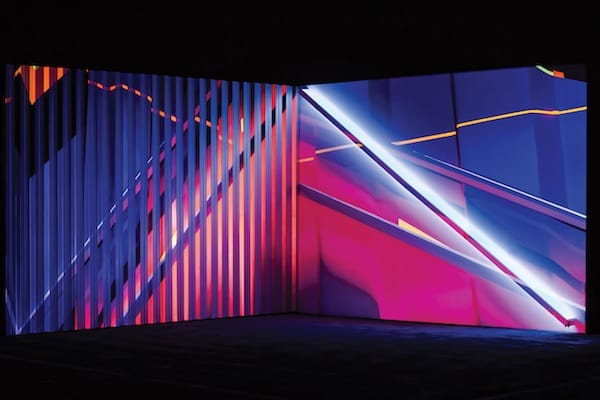 “His work is very fluid,” Cichocki says. “He has unhinged a fresh intersection of these historic genres. There’s no shortage of ideas. And there’s no fear. Chris knows that a risk needs to be taken.”

The moniker Kas Infinite derives from that idea of boundless creativity and limitless ambition.

At last fall’s Street festival at Westfield Palm Desert, Sanchez lit up the top level of the parking structure with a video projection installation. And earlier this year he illuminated Pyramid Procession, a series of small pyramids installed upside down from the ceiling in the group exhibition Desert Island, a Desert X parallel project at Indio’s Coachella Valley Art Center. In this show he included photographs of the same pyramids — painted in bands of black, orange, red, and white — prairie-dogging from an enclave in Box Canyon.

“He’s so diligent and puts so much love and attention into his work,” says Tony Diaz, a local curator who has known Sanchez since the artist was 10 years old and commissioned him in the spring to paint a mural at Laser Oasis in La Quinta. “He has a street style and a street sense, but also understands contemporary art. He can paint on anything, from a train to wall sculptures with neon lights.”

There’s a humble confidence about Sanchez that comes not only from his  own talent, honed and encouraged since he was in middle school, but also from knowing that artists he admired growing up … have achieved a measure of success.

A 2015 solo exhibition, The Here and Now at Coachella Valley Art Scene’s former Cathedral City space, punctuated his adventurous work with a selection of geometric, light, and street-style works. He has also painted murals for Red Bull Latagrafica in Los Angeles and Ernie Ball’s hegemonic presence at the National Association of Music Merchants show, the latter featuring the company’s eagle logo in the fluorescent colors of its guitar string packages. 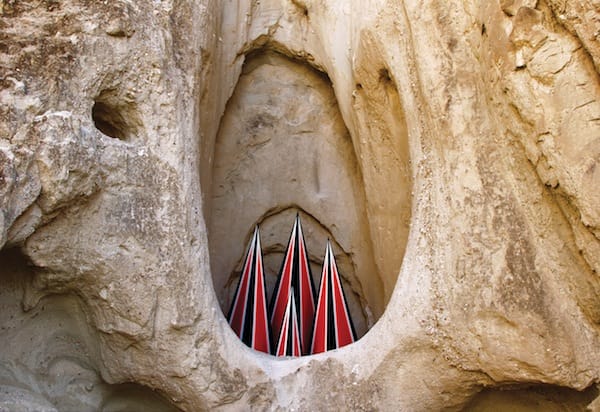 “I need to be mobile,” Sanchez says. “Instead of a studio, I go into different environments. I don’t go to art supply stores. I like industrial materials. You have to utilize what’s around you.”

He’s in a groove. Everything else suffers.