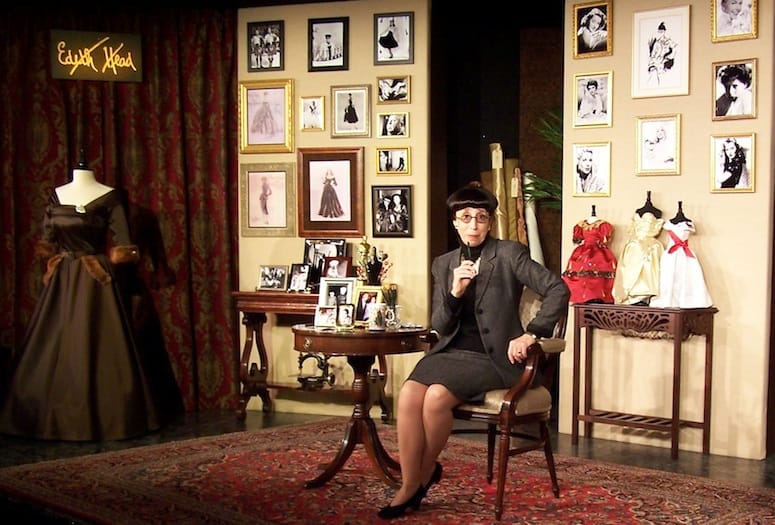 Besides bearing a resemblance to Edith Head, Susan Claassen was attracted to how the designer made a name for herself against an all-boys club in Hollywood.
Photos courtesy of Susan Claassen

Palm Springs will be alive with the spirit of Edith Head when actress Susan Claassen brings the doyenne of costume design to life in her one-woman, award winning show, “A Conversation with Edith Head.”

Written by Susan and Paddy Calistro and based on Paddy Calistro’s book, Edith Head’s Hollywood, the stage version runs Oct. 21-24 at The Palm Springs Woman's Club.

Head visited the desert mainly for business purposes promoting films she worked on with such Palm Springs perennials as Bob Hope and Lucille Ball. She retreated more to her hacienda style house in Coldwater Canyon choosing to spend time with her husband, animals, and a small coterie of friends. In later years they were Elizabeth Taylor, Tippi Hedren and long-time friend Bette Davis. Not reclusive but just dedicated to her work, it was normal for Head to put in 16-hour days. She worked up until her death in 1981 at age 83.

PalmSpringsLife.com spoke to Claassen about the role and the play's longevity. Edith Head looks over a sea of costume sketches she drew.

“I first got the idea while watching a television biography of Edith Head. I literally did a double take. My physical resemblance to her was uncanny. The more I watched, the more I knew there was a story to be told. I was fascinated by the complexity of this strong, executive woman in the all-boys club of Hollywood. Her career spanned over 60 years and 1,131 films! It was a powerful story of a woman who helped to define glamor in the glamorous golden age of Hollywood.”

What is the key to keeping the show fresh after 13 years?
“I’m constantly researching and learning and the show adapts to the host city. Another element is the audience. Each performance is different as the audience gets to submit questions.”

How was Edith Head a maverick and ahead of her time?
“Before Project Runway, there was Edith. She understood branding and was doing the first makeovers on Art Linkletter’s House Party.”

Claassen as Head serves up celebrity dish, bon mots, quips and quotes with signature bangs, chignon, and glasses. She’s also clad in Edith’s sartorial uniform of dark suit and classic pumps. MGM claimed more stars than in the heavens, but Head dressed more from de Havilland to Stanwyck and Audrey Hepburn in such classics as The Lady Eve and Breakfast at Tiffany’s.

Surprisingly, she preferred costuming men over women and did for some of the most handsome men in Tinseltown from Sean Connery to her final Oscar winning designs for The Sting starring Paul Newman and Robert Redford. She was nominated 35 times for an Academy Award and came home with eight golden trophies. Edith Head was known for her costumes for leading ladies, but actually preferred to design for men.