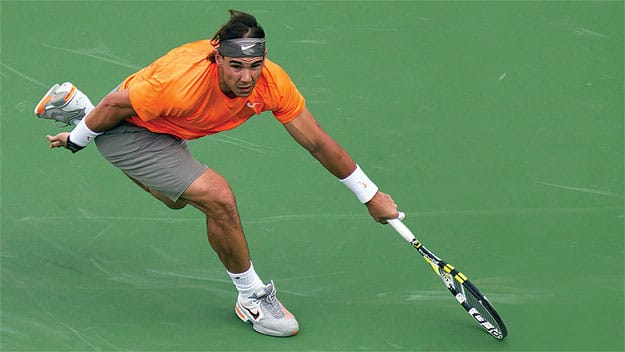 The buzz begins with one word: Rafa. A swell of people circles an outer court at Indian Wells Tennis Garden. Several fans snake to the front of the crowd in time to see Rafael Nadal unleash a punishing forehand during a practice session. His biceps ripple as he whips his racquet across the back of the ball, sending it spinning forward like a fuzzy, yellow bullet that shoots across the net and then — seemingly against all laws of physics — drops just inside the line.

Exhibiting the agility and conditioning of a boxer, Nadal keeps his feet moving. His tanned skin glistens with sweat. With each drop of perspiration that spills onto the blue courts of the BNP Paribas Open, hope rises among many in attendance (mostly female) that “Rafa” will peel off the wet T and reveal his famous sculpted form. But the world’s No. 2-ranked tennis player eschews the suggestion that he is the sport’s hottest stud. “I see myself as a very normal guy,” he says, “definitely not as a sex symbol.”

One fan commented that Nadal reminded her of a big puppy, loping onto the court like a retriever, his tangle of dark hair spilling over a bandana and his stride electrified with boundless energy.

Nadal, however, may not embrace that simile. In his autobiography, Rafa (Hyperion, 2011), he candidly offers that he doesn’t like dogs. “I doubt their intentions,” he wrote. He’s also afraid of thunderstorms and the dark. “[It’s] nothing to be ashamed of,” he says matter-of-factly. “That’s how I am.”

When he cut his long hair, women blogged and tweeted about how they missed that defining feature. But for Nadal, it was a figurative shrug of the tresses. “You grow and you change. Facts of life,” he says.

His blunt self-acceptance might be genetic or a fortunate consequence of growing up in a close-knit family. Coached since he was 4 years old by his paternal uncle, Toni, Nadal says the blood-is-thicker-than-water adage works for him. “He knows me. I know and trust him, and he’s taught me many things,” Nadal says. “I thank him even for those moments where he’s been tough. He’s proven to be right.”

Nadal noted in his autobiography that he builds a wall around him when he’s competing on the court, but his family is the cement that holds the wall together. When his parents separated in 2009, his emotional axis was thrown so far off-kilter that it affected him physically. His fourth-round loss in the French Open later that year and his absence at Wimbledon that summer was publicly attributed to painful knees, but Nadal wrote that deep down he knew the root cause was his state of mind. His zest for competition stagnated and “the adrenalin had dried up.”

He continued training through the heartache, keeping his routines intact, and waited for the competitive fire to return. It did. He won seven major titles in 2010, including three Grand Slams: U.S. Open, Wimbledon, and French Open.

But Nadal brings out his savage warrior only during match play. Off the courts, he pals around with other pros. YouTube has many fuzzy clips of him kicking a soccer ball around with his tour mates. “I like to have a good relationship with my fellow players,” he says. “Competition is only on the court.”

He’s been called ferocious, tenacious, intense, and focused. Watching Nadal focus on the ball during play is an exercise in Zen. He personifies “be here now” the second he steps on the court. He zeroes in on his team’s box and may offer a quick nod to fans; but after that he’s in the zone, seemingly oblivious to the commotion around him.

Stadium courts are notorious for distractions during big matches. Ball kids and lines people appear in a player’s peripheral vision like uniformed phantoms. Swirls of wind deposit abandoned napkins and paper cups at the players’ feet. Latecomers slide into mid-row seats issuing apologies. And, of course, the occasional ill-timed screams from impolite fans are attempts to shatter their favorite player’s opponent. But Nadal has eyes for only the ball; and if his attention wanes, he owns it. “I have pretty good concentration,” he says. “Only my own brain can play games against me.”

In the locker room, Nadal prepares for competition with determined precision. He methodically wraps overgrips on each handle of his six racquets. Before warming up, he checks his bag for items he may need: extra socks and shirts, a pair of casual shoes, and his ever-present iPod. Music is a critical component of Nadal’s pregame routine. It helps distance him from chaotic surroundings. “Before a match, I always have my headset on,” he says.

His on-court rituals are equally precise. Before each point, Nadal tucks his damp hair behind his ears and tugs at the back of his shorts. During changeovers, he takes a sip from a water bottle and carefully sets it back in the same place. Then he sips from a second water bottle, returning it also to its dedicated position. He does these things with unwavering consistency.

After a match, win or lose, he relaxes with room service or goes out to dinner. “I also like to spend some time with my team and chitchat about things,” he says. “I don’t celebrate big or the opposite when I lose. I try to take wins and losses calmly.”

His biggest threats at this year’s BNP Paribas Open (March 5-18) are No. 1 player Novak Djokovic and longtime rival (and friend) Roger Federer, now trailing him at No. 3 in the ATP rankings. “But I always say that the most challenging opponent is the next one you play against, in any round,” Nadal says.

Nadal likes coming to the desert and says the Indian Wells tournament is one of his favorites. “We come from a month without competing and go to a tournament that has great facilities and great nontennis activities, such as golf,” he says. “I love to play golf, and there are many great courses.”

He briefly considered golf as an alternative to tennis after a potentially career-ending injury sidelined him in 2005 (he’s that good on the green). He golfs when he can while competing in the BNP Paribas Open. He was a guest of golf pro Fred Couples at the Madison Club in La Quinta. And this year, he looks forward to joining tournament owner and business mogul Larry Ellison for a round or two at Porcupine Creek. “They are two of the most amazing golf courses in the world,” Nadal says.

Whether playing golf or tennis, athletes need to eat. For a few weeks in March, you might find Nadal dining at Okura Robata Grill and Sushi Bar, Ristorante Mamma Gina, Pacifica Seafood Restaurant, or LG’s Prime Steakhouse. He also enjoys staying in his villa and grilling meat or fish he buys at a local supermarket.

When it’s time to go home, the Spaniard returns to his loved ones on the Mediterranean island of Mallorca. He settles into a slower pace in the seaside town of Manacor. He visits with friends, enjoys dinners with family, plays golf, and trains for his next tennis bout. And every morning, Nadal says, “I wake up and watch the sea.”

BNP Paribas Open (March 5-18) serves up more than 300 professional tennis players from around the world and draws hundreds of thousands of spectators to Indian Wells Tennis Garden. The tournament is one of few major events that combine ATP World Tour and WTA men and women (with $9 million in total prize money in 2011). Defending champions Caroline Wozniacki and Novak Djokovic will compete against top players, including Kim Clijsters, Lindsay Davenport, Roger Federer, Ana Ivanovic, Rafael Nadal, Andy Roddick, and Maria Sharapova. For tickets, special promotions and a rundown of entertainment, and attendant events in the tennis village, visit www.bnpparibasopen.com.

A Foundation for Youth

The tennis star launched the Rafa Nadal Foundation in 2008 to support and provide opportunities for disadvantaged youth. The foundation’s mission is to “provide an opportunity for children and adolescents with disabilities, those coming from underprivileged surroundings, and those limited by an unfortunate family environment.” The foundation offers educational programs in which sports are a vehicle for personal and social integration, passing on values such as effort, self-improvement, and respect in order to encourage their self-esteem and confidence. Visit www.rafaelnadal.com.