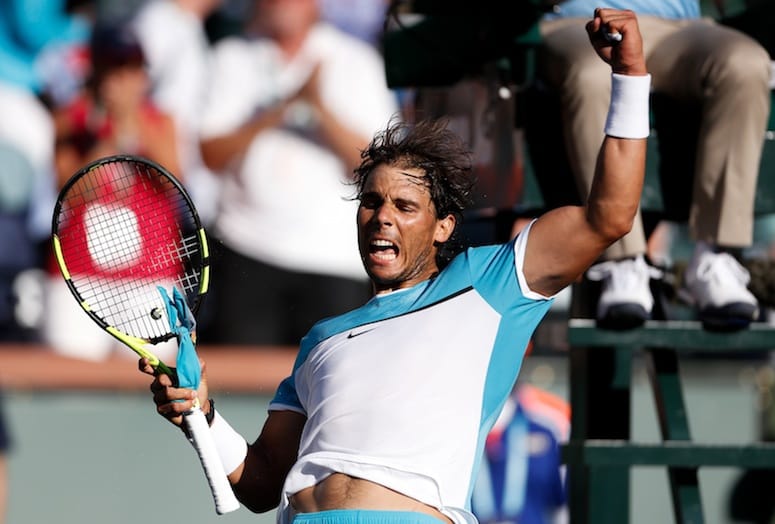 Nobody can slow down the future. Nobody, that is, unless you are a greatly talented and gritty Spaniard with the fight of a pit bull.

That pit bull would be Rafael Nadal. If he gets his teeth in your pants leg, say goodbye to the pants. He is the tennis version of an elite marathon runner. Others fade, others stop. Nadal never does.

Nor would he in front of a nearly packed house on Stadium 1 late Wednesday afternoon at the BNP Paribas tennis tournament at Indian Wells Tennis Garden, a tournament he has won three times. This time, he won a match he shouldn’t have. He overcame a match point. He outlasted and out-gutted youth. The clock kept wanting to strike midnight on him, and he refused to let the hands move.

It was the match of the tournament, and there was little surprise in that. The opponent was the future, an 18-year-old German named Alex Zverev, who hits serves like he is shooting rockets and displayed what he is, and what he is likely to become, by dismantling veteran Gilles Simon of France in the previous round, 6-2, 6-2. Rafael Nadal: “I will keep playing with that passion, and I hope then to recover my game.”

Before he played him, Nadal said Zverev will be No 1 someday, that he has all the tools.

The match was not only past and future, but Mutt and Jeff.

Zverev is 6-foot-6 and serves often in the high 130s, even an occasional 140. Facing his serves is like standing in a hailstorm. You can’t move fast enough to get to them, or out of their way.

Nadal is the longtime veteran who, at 29, seems to be in the usual nearing-30 career fade, after a career that has brought him 14 major titles, including nine French Opens and at least one of each of the other majors for a rare career Grand Slam. But he is five inches shorter than Zverev and about 25 miles-an-hour slower with his serving attacks.

So often, especially when he was in his prime in 2008-2010, you would not watch his matches so much to see whether he would win as much as when and how the other guy would cave. In the case of Zverev, the caving came at match point. His.

He was serving at 5-3 and 40-30, and his 131 mph service bomb forced a week, bloop return from Nadal. Zverev saw that and, correctly, closed the net. And then he made a mistake that will haunt him for a while. He dumped the volley into the bottom of the net. “I missed the easiest shot I had the whole match,” he said later.

The air came out of the young balloon. Nadal broke back, held to 5-5, and benefited from two horrible double faults by Zverev at 5-5 and 30-all.

The ending was typical Nadal. His young opponent was trying his best to recover some measure of fire, to shake off the shock of blowing a match against one of the greatest players in history by missing a shot that club players don’t. Down 40-love, he went toe-to-toe once again with Nadal from the baseline on the first of Nadal’s three match points. And he got the advantage, forcing Nadal deep and cranking a shot right at his ankles with Nadal out of position.

But in a glint of a moment, it was 2010 again. Nadal reflexed the shot off his shoe tops and into the open court, and the match was over.

Nadal said afterward, “He had a big chance for victory (the volley). I am sorry for him.”

He also said this was a big victory, that it was what he needed in the way of fire and effort, stubbornness and never-say-die attitude, that has defined his entire career.

“I will keep playing with that passion,” he said, “and I hope then to recover my game.”

Zverev gathered his rackets and quickly left the court. His head was down and he resembled a kid who had just had his skateboard stolen. That remorse is expected, earned, and is part of the learning process for anybody who is to become a star in the sport.

Most likely, Zverev’s court departures will be less and less in sadness. The whole game is there and Nadal, as well as the tennis world, knows it.

It was a big victory for Nadal, who wants to do what all aging superstars want to do — keep it going. Victory might be the wrong word here. Reprieve would be better.

As for Zverev, the future won’t be held back forever.