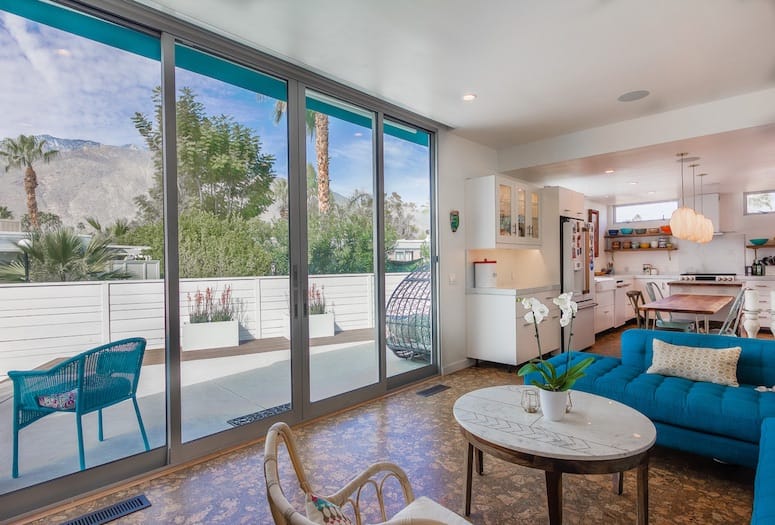 Mobile home living has been part of Palm Springs since before it was incorporated. Ramon Mobile Park was developed in 1938 by John Williams, and is said to have been the second home to many Hollywood writers, musicians, and below-the-line talent. During the Chi Chi years, actress and singer Della Reese was said to have lived there briefly, according to pscelebrityhomes.com.

These days there’s no shame about trailer park living. People have been snapping them up and turning them into astounding showcases. Two residents of Ramon Park have done just that. In an amusing twist, they both have Hollywood connections. 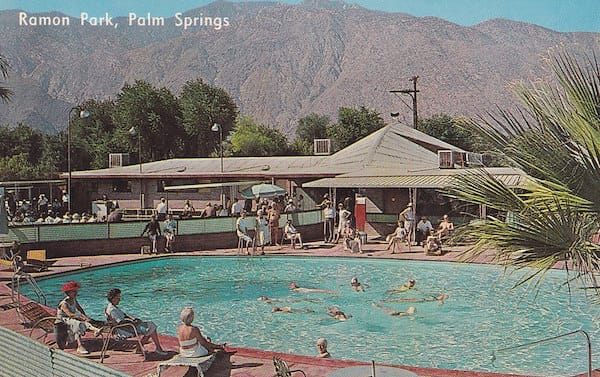 Both of Lisa Ferretti’s parents were industry pros: her father was a writer who wrote for television series, such as Green Acres, while her mother was a model on The Bob Cummings Show. The family visited Palm Springs frequently, often staying in the Ocotillo Lodge.

As an adult, Ferretti spent time in New York, Los Angeles, and the Bay area prior to relocating to Palm Springs. “I was working in a medical practice for 30 years,” she explains. “A sperm bank and fertility practice for alternative families, and my partner in the business wanted to retire. We sold to a larger cryobank, and I stayed on as a consultant which enabled me to work remotely. ”

• READ NEXT: The owners of Dazzles spend part of the summer living in vintage trailers in Idyllwild.

A friend invited her to visit in Palm Springs, and, on a whim, they went to an open house in Ramon Park. She made an impulsive decision and bought it. “I had never lived in a trailer before,” she admits. “I had never renovated a trailer. I had renovated houses, and had been involved in design for many years, but I wanted to downsize. I wanted to simplify my life and have a low overhead, and just create a really peaceful living environment and have a simpler way of life.” 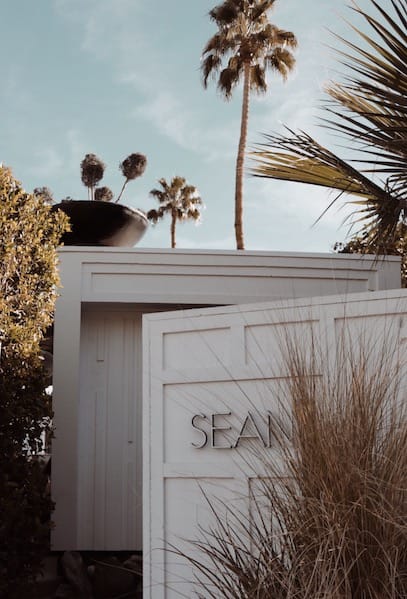 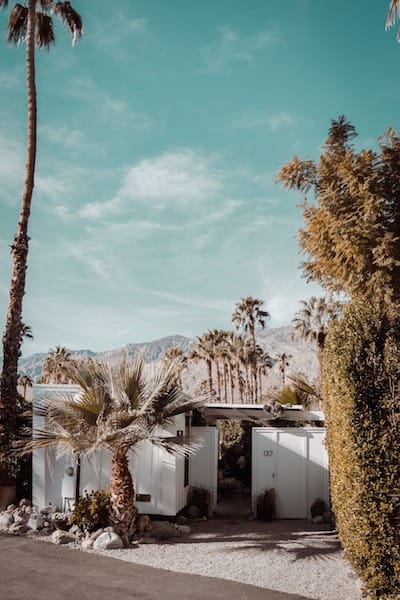 Sean Wise's Ramon Park home faces west to gain mountain views from both inside and outside. He paid homage to his family's ties to Disneyland by adding these saucer planters to his roof. “Those planters were used all over [Disney],” he recalls. 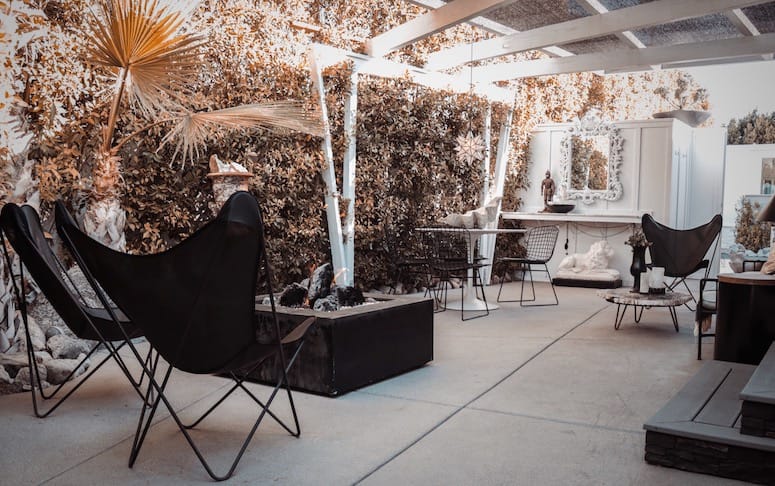 Sean's 400+ foot patio is actually bigger than the house.

Around that time, Ferretti met Sean Wise, an interior designer, antiques dealer, and owner of LikeWise. He had an antique, aluminum Spartan trailer he had restored to its original glory. “It was really cool when I had done it,” Wise relates. “But three weeks after I got it [to Ramon Park], it flooded. The pipe came off the water heater while I was away for Father's Day, so it ran like a hose for four days.” The renovated Spartan was ruined, but he still had a lease on his lot.

Wise found a 320-foot 1961 Skyline trailer and had it moved to his leased lot and began renovations. He used every available space for storage; built-ins were a great way to create function while never skimping on stylish details. He installed high-end, size-appropriate appliances in the kitchen, and while the modern bathroom is small, it has everything you need in a bathroom. He and his partner, Brian, have no problems negotiating the small indoors area, and when they need a bit more space, there’s 450 square feet of living and entertainment space outside with enough seating for an intimate party of 15.

Wise grew up in the Disney family; his father began working the Jungle Book-theme ride at Disneyland, but rose up the ranks to vice president of operations. Ironically, Wise’s favorite place to go in Disneyland was Tomorrowland. He paid homage to it with a saucer planter he put on the roof. “Those planters were used all over [Disney],” he recalls. 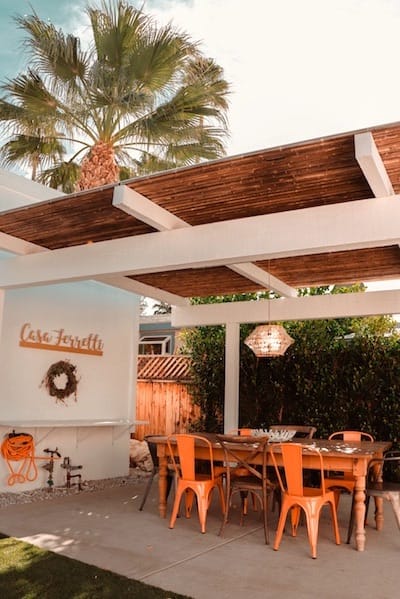 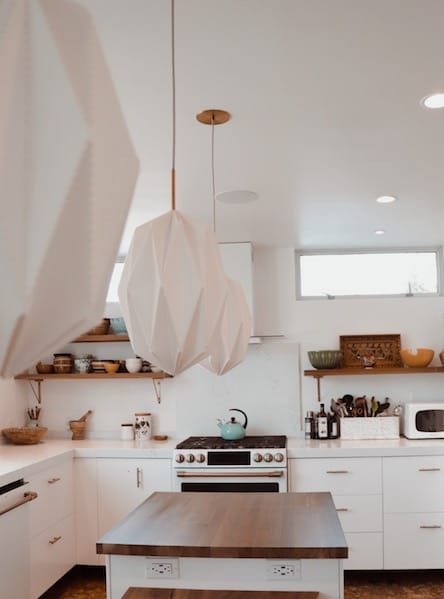 Lisa's kitchen has plenty of room for food prep to be served outside.

The view from the patio gives an unobstructed view of the mountains.

Ferretti’s pipes didn’t burst, but the clouds did. There was a massive downpour, and although the park had made improvements over the years, the drainage system around her house couldn’t handle the deluge. Ferretti’s newly renovated home flooded, and developed black mold. She had to move out and start from scratch.

After all was said and done, Ferretti created a midcentury modern home that utilized every inch of her lot. She had several outdoor spaces, and the interior was magazine ready. But it lacked that coveted Palm Springs mountain view, and she wanted it.

She found an area in the park that was perfect, and spotted a trailer she thought had good bones for a new project. She made a deal with the owner of the park to rent the two spaces, purchased and moved the trailer, and began a new renovation. Today, just the bones of the trailer remain, but what she created is quintessential Palm Springs living.

One of the first things Ferretti did was bump up the ceiling an extra foot, and position it so the view cleared everything obstructing the sight of the mountains. The inside comes in around 720 square feet, on the larger side of the tiny home movement, but it feels so much bigger. “I knew I wanted all one big open space, like a loft,” she says. “I didn't want walls, except we have to have walls around the bathroom.” 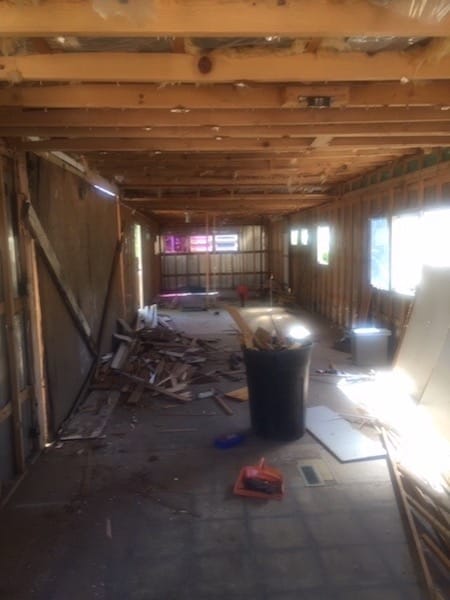 Lisa's current home before the renovations. 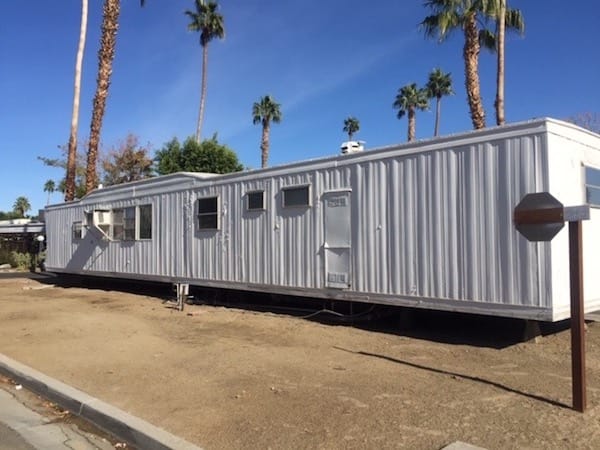 The surprisingly large country-chic kitchen opens up to the living room's sectional couch and chairs, a large TV on the wall, and a built-in workspace with a desk in a nook. There are giant sliders that open it up to her outdoor living, but she has had electric blinds installed behind the nine-foot glass doors with two selections: regular, and black out for the summer.

The one-bedroom home has a laundry “room,” which has an area for her dog, including a doggie door and doggie bed. Just off the laundry area is a well-designed bathroom and nearby is a big bedroom that includes a killer closet.

Ferretti’s concept takes trailer living to new heights. “I'm excited about being able to showcase a different way of living in Palm Springs,” she says. “You don't have to have that million dollar house and pool.” Wise chimes in, “The sliders are a perfect example of that. Who puts nine-foot-tall sliders in a trailer? Lisa does.” That concept connects the well-appointed inside to her smashing outdoor area that includes a living space, a large dining table, and while some people put in an outdoor shower, Ferretti put in a claw foot bathtub, which Wise calls “A great big ice bucket for entertaining.”

Last fall, Ferretti opened her home up for an event co-produced by Modernism Week and the Palm Springs Animal Shelter. It was called Give Me Shelter and showcased homes with pets and outdoor living. It was such a hit that she and Wise are hoping to create future tours that showcase renovated trailers with a midcentury modern flair, and beyond.

The tiny home/manufactured home/trailer situation has changed in the past few years. It’s become so popular that the days of nabbing a trailer for less than $40,000 are gone. Recently, Ferretti, who is also a realtor for The Paul Kaplan Group, sold a home in the park for more than $100,000. Still, that’s a small price to pay for a home with no conjoined walls, and, depending on the lot, a yard, and the ability to make it your own postcard-ready slice of paradise.

PHOTO GALLERY: Sean Wise's home before and after.