Rancho de la Luna Is Off the Beaten Path, but Popular for Top Musicians 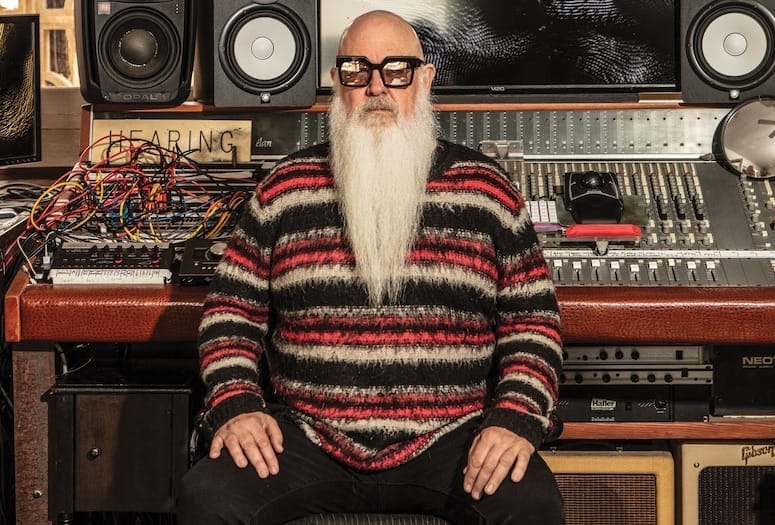 It’s early afternoon in the Morongo Basin. The sun is bright, the blue sky extends for miles, and Joshua trees punctuate the landscape. Off a dirt road north of Highway 62 in Joshua Tree, Rancho de la Luna feels miles away from civilization. But the renowned recording studio, situated on 10 acres of raw desert land, is a stone’s throw from Joshua Tree National Park. Like its well-known neighbor, the studio is a popular destination, attracting musicians from far and wide — Queens of the Stone Age, Iggy Pop, PJ Harvey, Arctic Monkeys, The Duke Spirit, and Foo Fighters, to name a few —and appeared in Dave Grohl’s Sonic Highways TV series, the music documentary American Valhalla, and an episode of Anthony Bourdain: No Reservations on The Travel Channel.

Rancho de la Luna makes a low-key yet impactful first impression. The studio is housed in a brown stucco bungalow with a sloped roof and surrounded by a 4-foot-high brown stucco wall and a variety of cactuses. Out front, owner Dave Catching’s 1970 red Cutlass Supreme convertible offers the only splash of color amid these earthy surroundings. 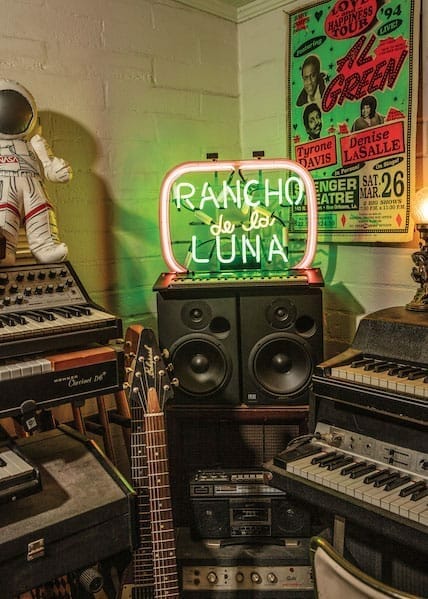 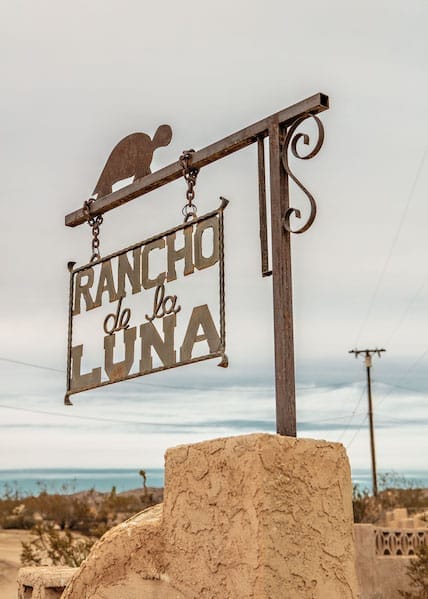 Wearing a black T-shirt and jeans, Catching sits in the bar area of the property’s vast outdoor space, which also has a fire pit, BB gun shooting gallery, and chaise lounges extending along a patio wall. His gentle eyes beam behind black, thick-framed square eyeglasses, which, along with his long white beard and easy demeanor, lend the appearance of a sage hippie/philosopher/prophet.

“I didn’t have any plans to come here,” Catching says. “But I loved Fred [Drake]. He was awesome, and it sounded fun, so I sent him some money for the gear and started a studio.”

Catching was living in New Orleans in the early 1990s, when Drake, a former bandmate, business partner, and friend, called and asked if he wanted to invest in a recording studio.

By 1994, only a year after it opened, the studio was attracting notable clients such as producer/musician Daniel Lanois, who came to record instrumental tracks on the suggestion of sound engineer Trina Shoemaker. “He was one of our favorite producers,” says Catching, who, when needed, works as a second engineer on studio recordings. “[Lanois’] solo album was amazing, and everything he worked on sounded great, so it was a huge honor.” 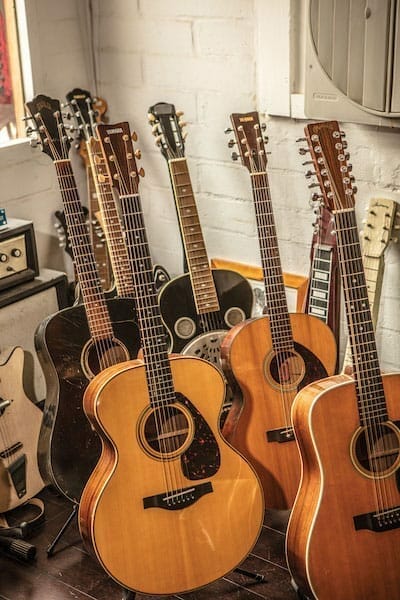 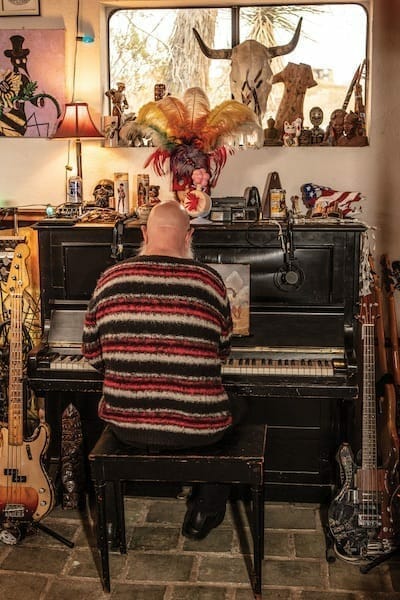 Drake and Catching were fortunate when Lanois, who was producing records for artists at other recording studios, dipped in and out of Rancho de la Luna, where he left most of his personal recording gear and encouraged the duo to use it while he was away.

Drake died 20 years ago, and his absence is palpable. Catching describes him as an outgoing, congenial studio host and a talented musician, producer, and engineer who was beloved among all who knew him. “People used to stop by just to visit him,” Catching says. “He was the best.”

In 2004, Catching, a Memphis, Tennessee, native and former cook and restaurant owner, moved into the studio, took over hosting duties, and even prepares meals for clients.

Catching, now 60 years old, started playing guitar when he was 15. Over the decades, he has been a founding member of several bands, including Queens of the Stone Age, which he left in 2000. He remains active in two others: earthlings? (a band he and Drake founded in 1994) and Mojave Lords. He’s also played in Modifiers, Tex and the Horseheads, and Eagles of Death Metal. On Thursday mornings, Catching hosts the heavy metal show “Ascendants Aural Architects Show” on the streaming station Gimme Radio. 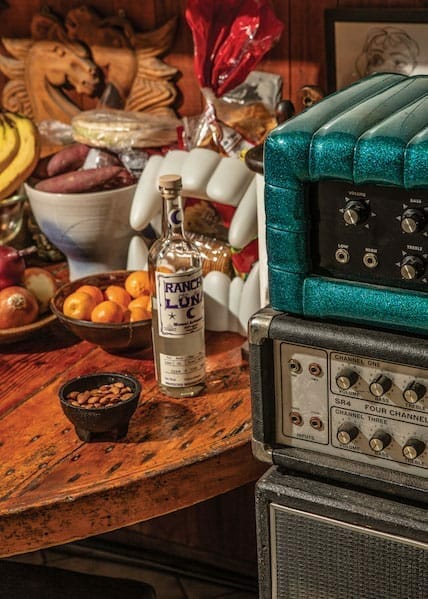 As he stands up to enter the studio, Catching turns to the horizon and stares. “I love Joshua trees. They’re so beautiful, and they’re all so unique,” he says, as awestruck by the desert now as he was when the studio opened in 1993. “The landscape, the peaceful skies, the quiet … I love everything about it.”

Though the wide-open desert is, in and of itself, inspiring to musicians and other artists, part of Rancho de la Luna’s appeal is its quirky charm. What it lacks in physical space, the approximately 1,000-square-foot studio makes up for with heart, hominess, whimsy, and memories of those who have made music here. 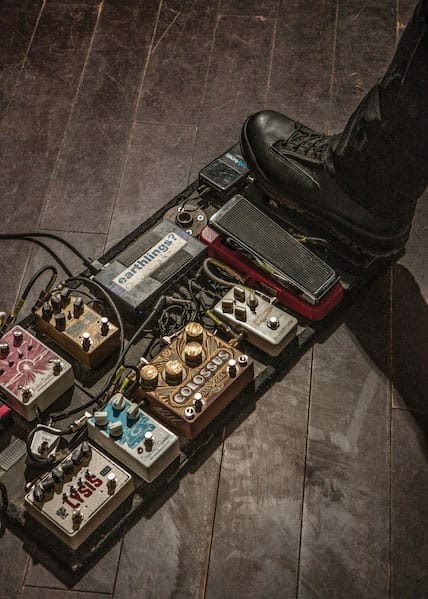 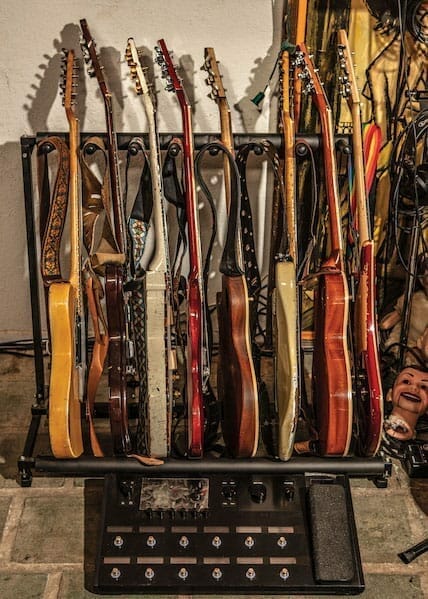 Sound effects pedals and rows of guitars round out an assortment of drum kits, keyboards, and amplifiers situated in almost every nook of Rancho de la Luna.

A cobblestone pathway leads to the studio. The eclectic décor, which Catching calls “swap meet/thrift store chic,” comes into view with a hodgepodge of goodies on the front porch. There’s a dusty Hammond organ covered in knick-knacks across from a pair of well-worn chairs. Various objects, including a bowling pin, guitars, paintings, and a mirror, are scattered on the floor. A couch with pillows resembling music gear offers seating beneath a metal peacock sculpture. And a wooden Rancho de la Luna sign, where Catching likes to photograph guests, hangs by the front door.

The entry to the studio is a lounge where musicians wait to record their parts — a living room with white-painted brick walls, dark wood flooring, ceiling fans, a ceramic-tile coffee table, a stained-glass window, an old couch draped in a Southwestern-style blanket, and a row of guitars. The room has many curious objects: an alien mask hanging on a wall, a star-shaped lantern, and a bald doll head on a shelf with an array of effects pedals, some of which look like vintage cars.

To the left side of the entrance, reminders of Drake top the recording console — a photo in which he wears a white T-shirt and jeans, and a painting of his horse, Kashmir, amid a variety of Rancho de la Luna guitar picks. To the right is a tiny room with keyboards, guitars, and amplifiers and decorated with white fairy lights, a neon Rancho de la Luna sign, and a 1994 Al Green poster. 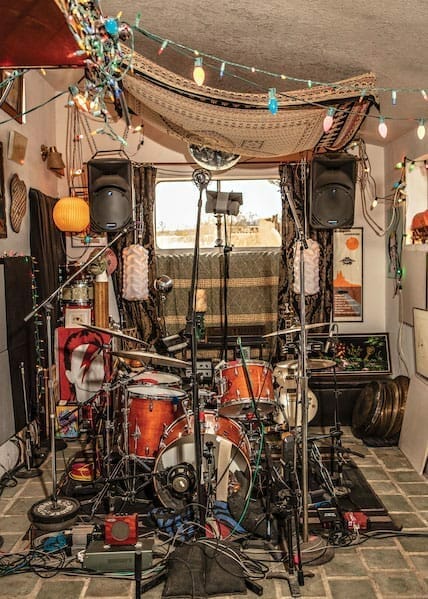 The “magic happens” in the tracking room. 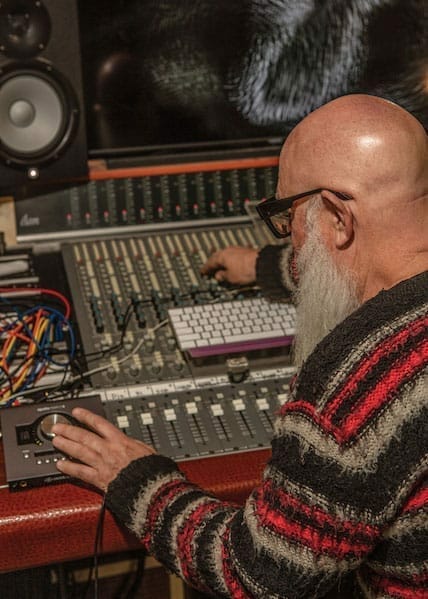 Catching sometimes works as a second engineer on recordings.

In the small kitchen off the lounge, a boxed shipment of Rancho de la Luna mezcal — a venture Catching started six years ago with his friend, business partner, and Mojave Lords bandmate Bingo Richey — sits atop of the refrigerator, which is covered in band stickers, magnets, and photographs.

But the tracking room, at the back of the studio, is where the magic happens, as the gold records on the wall for Queens of the Stone Age and Arctic Monkeys suggest. Colorful string lights and a disco ball add a festive vibe to the room that’s otherwise outfitted with a drum kit, drum machine, bass guitars, guitars, and amps — and an assortment of masks, paintings, posters, and dolls. From there, a small hallway leads to Catching’s bedroom, which doubles as a room for recording guitars and bass. 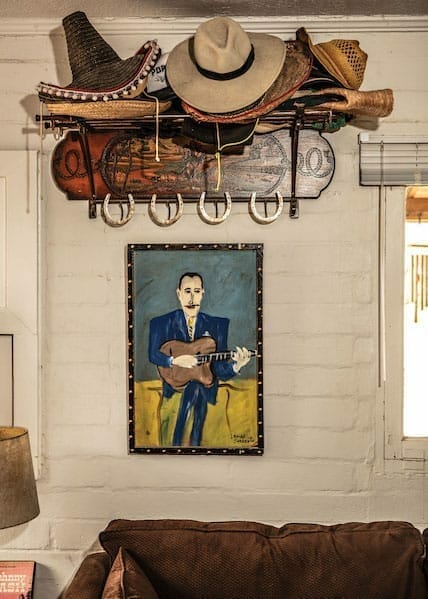 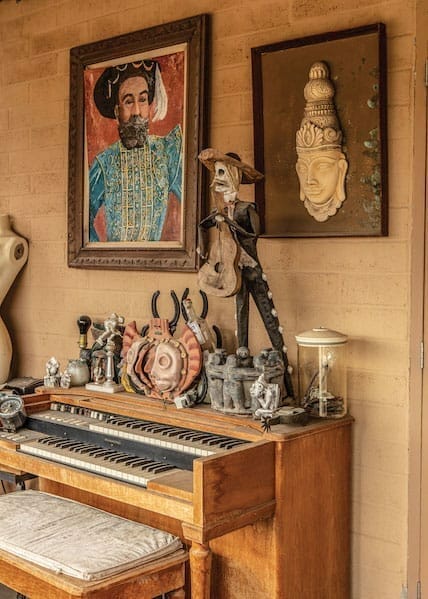 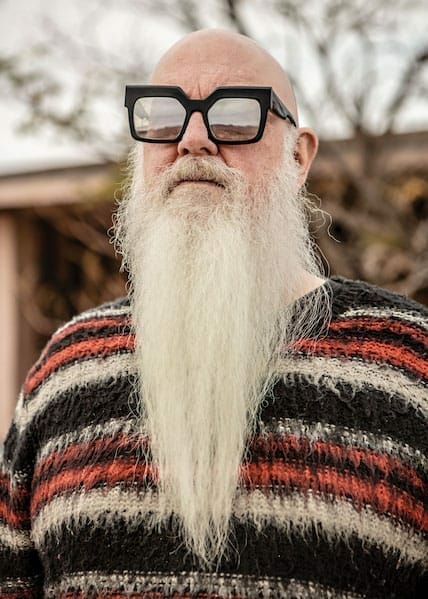 Rancho de la Luna puts out a lot of volume, but Catching says he’s been lucky with the neighbors.

In the small kitchen off the lounge, a boxed shipment of Rancho de la Luna mezcal — a venture Catching started six years ago with his friend, business partner, and Mojave Lords bandmate Bingo Richey — sits atop of the refrigerator, which is covered in band stickers, magnets, and photographs.

But the tracking room, at the back of the studio, is where the magic happens, as the gold records on the wall for Queens of the Stone Age and Arctic Monkeys suggest. Colorful string lights and a disco ball add a festive vibe to the room that’s otherwise outfitted with a drum kit, drum machine, bass guitars, guitars, and amps — and an assortment of masks, paintings, posters, and dolls. From there, a small hallway leads to Catching’s bedroom, which doubles as a room for recording guitars and bass.

It’s easy to imagine how loud it gets when musicians go full throttle in the snug space. But volume isn’t an issue at Rancho de la Luna. “We have had some very loud sessions that we were worried about, but no one’s complained,” Catching says. “We never soundproofed it. We’ve just been lucky with our neighbors.”

Bands typically learn about Rancho de la Luna by word of mouth or scanning the credits of their favorite records, Catching says, and they often stay for multiday stints. Bands can shack up in the small guesthouse on the property or at nearby hotels and vacation rentals.

To help musicians with distribution, Catching and Richey started a boutique record label, Rancho de la Luna Records, for recordings made on the premises by artists without record deals.

Part of the appeal of this no-frills is that it remains largely unaltered in the face of unprecedented expansion in the Morongo Basin. “It’s changed a lot out here since the early ’90s, when there were 70,000 visiting [Joshua Tree National Park],” Catching says. “This year, they’re expecting 3 million. Lots of people moved out here during the pandemic.”

Rancho’s guests enjoy the best of both worlds. The studio is close enough to enjoy the new amenities thanks to local growth but still isolated with few distractions — a self-contained world centered around the magic of creating music.

• READ NEXT: Cheryl Bentyne Reflects on Highs, Lows of The Manhattan Transfer.