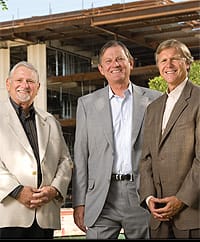 Rancho Mirage has long been synonymous with palm-studded oases, lush golf greens, gorgeous film stars and esteemed politicians — and rightfully so. But thanks to an aggressive marketing campaign and word of mouth that is second-to-none, it is also rapidly gaining acclaim as a prosperous commercial, cultural, recreational and professional oasis in the heart of The Palm Springs Valley.

Such highly lauded residents as President Gerald and Betty Ford, Dinah Shore, Bing Crosby, and the Honorables Walter and Leonore Annenberg have helped garner the spotlight for Rancho Mirage over the years. Today, however, it is primarily prominent business leaders that define the city. More than 17,000 residents (a number that swells to 30,000 during “season”) now call the city home, attracted by premier luxury resorts; exclusive country club communities, top-notch recreational, medical, and shopping venues, and unparalleled natural beauty — qualities that have made Rancho Mirage the valley city of choice for both residents and visitors alike.

A stable government and strong fiscal health have also contributed greatly to the city’s attractiveness. Rancho Mirage boasts what few cities can: a reserve that actually increases rather than decreases over time and a cash flow that has never seen the color red. That has helped Rancho Mirage earn a strong reputation as one of the best-run cities in the nation.

“Our financial condition is excellent,” Mayor Ron Meepos proudly declares. “In our 35-year history, we have never, ever had a financial deficit. In other words, we have always put more money in our ‘savings account’ than we have taken out.”

Behind every successful organization is its people, and the city of Rancho Mirage is no different. The city hosts a “council-manager” form of government, which consists of five council members who rotate the office of mayor among them. Charged with implementing the policies and programs of the council is City Manager Patrick Pratt, who has served as the city manager for 18 years, the longest tenured city manager in Riverside County. The Rancho Mirage team — the council, the city manager, and staff — provide one of the most stable and respected governments in the valley.

Recently, the city demonstrated this commitment to fiscal responsibility by doing something quite unheard of in the realm of traditional city business: it actually gave up land, deciding to forego its right to annex more than 4,000 acres north of Interstate 10 after careful deliberation determined the addition would add an unnecessary tax and service burden.

“If we had kept and annexed that land, it would have added at least 25,000 new residents to Rancho Mirage,” states Mayor Meepos. “But existing revenues would have to be used to pay for police, fire, and other services to those new residents, resulting in fewer funds available for the maintenance of the infrastructure of the city.”

It is an infrastructure that is growing by leaps and bounds but at a well-managed pace with a number of new projects, both planned and underway. One of the most impressive enterprises in progress is the construction of the 250-bed Walter and Leonore Annenberg Pavilion at Eisenhower Medical Center, the only not-for-profit hospital in the Palm Springs valley and a crown jewel of the Rancho Mirage community. Set to open in early 2010, the $212.5 million addition will help Eisenhower Medical Center address the area’s rapid growth and will include state-of-the-art intensive care, coronary care, and cardiac surgical units, as well as an intensive care unit dedicated to neurosurgery patients.

The Walter and Leonore Annenberg Pavilion will also enable Eisenhower Medical Center to continue its longstanding commitment to excellence, a practice that has earned the hospital numerous awards and recognitions in recent years. Earlier this year, Eisenhower was named in the top 5 percent of all hospitals in the nation and was awarded the 2008 Distinguished Hospital Award for Clinical Excellence™ from HealthGrades®, a leading independent healthcare ratings organization. Eisenhower is one of only 80 hospitals in the nation to receive this award and the Distinguished Hospital Award for Patient Safety™.

“These awards reflect Eisenhower’s ongoing commitment to providing outstanding care and service in all areas of patient safety and clinical excellence,” says G. Aubrey Serfling, president and chief executive officer of Eisenhower Medical Center. “It is an honor to be among the nation’s leading health care institutions who also received this prestigious recognition.”

Such recognition, along with its lasting relationship with the world-renowned Betty Ford Center at Eisenhower, have helped establish Eisenhower as a healthcare Mecca in the community. What is increasingly becoming clear, however, is that Eisenhower is only part of a greater healthcare oasis that is burgeoning in and around Rancho Mirage.

“Rancho Mirage is building upon the prestige of the Eisenhower Medical Center to grow an impressive healthcare industry cluster,” explains John M. Soulliere, president and CEO of the Coachella Valley Economic Partnership. “The benefit to the region is multifaceted, including greater commerce and the proliferation of healthcare-related jobs that will serve to invigorate the local economy.”

Rancho Mirage is unequivocally claiming its right as a leading center of political and professional progress, but careful to not stray from some of the finer qualities that helped make the city what it is today. From fine dining to championship golf to world-class spas, Rancho Mirage has been and continues to be the preferred luxury resort destination in the heart of The Palm Springs Valley.

More than $900 million dollars of resort refurbishment or new resort construction are underway in the city, including The Ritz-Carlton, Rancho Mirage — the only, poised to be, five-star resort in the valley. Due to open in early 2009, The Ritz-Carlton, Rancho Mirage will provide the pinnacle of luxurious hotel and resort experiences and will feature, among other amenities, the 24,000-square-foot internationally acclaimed La Prairie Spa.

Additionally, the Agua Caliente Casino•Resort•Spa offers a 340-room resort-style hotel just off I-10 in Rancho Mirage. The recently expanded casino complex is adding a 2,000-seat entertainment venue, one of the largest in the area. Such a venue will allow the Agua Caliente Casino•Resort•Spa to bring some of the biggest names in the business to the valley, taking live entertainment in the region to a new level.

Golf? Did someone say golf? Rancho Mirage is famous for it, as home to more than a dozen courses and the renowned Kraft Nabisco Championship. Now in its 38th year, the Kraft Nabisco Championship brings the world’s spotlight to Rancho Mirage for a week in spring as the globe’s best lady golfers converge on the Mission Hills Dinah Shore Tournament Course to vie for one of the sport’s greatest prizes. The tournament draws more than 60,000 fans, as well as extensive national and international media coverage.

“The tournament has an annual economic impact in excess of $50 million dollars on this community, with immeasurable mutual benefits from our longstanding relationship with the city,” explains Terry Wilcox, tournament director. “It is the first major tournament on the LPGA tour and is second only to the Masters in regards to course tenure.”