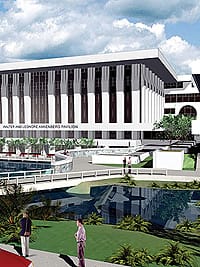 Long known as a playground for the rich and famous and an oasis of natural beauty, Rancho Mirage has also developed a unique reputation among another segment of visitors and residents. The medical and healthcare services that thrive in the city represent the essence of Rancho Mirage — geographically, economically, and philosophically. For healthcare professionals and for the individuals, families, and businesses that benefit from their practice, Rancho Mirage embodies the medical ideals of health, wellness, truth, and beauty.

“The quality of life for the residents of Rancho Mirage is significantly enhanced by the Eisenhower Medical Center and the burgeoning medical offices and healthcare facilities in the vicinity of the center,” says Mayor Gordon Moller, adding that quality of life refers to every moment. “Time is everything in an emergency, for example. Our paramedics respond to 911 calls in an average of 4.6 minutes; and within the city limits, the service is free.”

“I will keep pure and holy both my life and my art,” wrote Hippocrates more than 2,000 years ago. Every practicing physician in the United States has repeated these words as part of the Hippocratic oath, and nowhere does the promise resonate more profoundly than in Rancho Mirage. While Native Americans and European settlers have sought the spiritual and healthful aspects of the Palm Springs region for centuries, the benefits of modern, Western medicine, made an auspicious appearance some 40 years ago, when the not-for-profit Eisenhower Medical Center arose on Bob Hope Drive.

“Once the Eisenhower Medical Center was established in 1971,” says Patrick Pratt, City Manager, “there was a natural synergy and focal point for medical activities in the area. Eisenhower provided a positive catalyst for medical and related growth in Rancho Mirage and the entire valley.”

Eisenhower Medical Center has been designated as one of the nation’s most successful and effective hospitals. All of its departments and facilities are recognized for excellence in patient care and for a vibrant and broad range of education and research. The facility ranks among the top one percent of hospitals in the nation for its combination of clinical and patient safety excellence. The Eisenhower campus encompasses more than 130 acres and offers a dynamic, progressive healthcare complex including a 313-bed hospital, and the world-renowned Barbara Sinatra Children’s and Betty Ford centers. And Eisenhower is growing. In addition to its existing facilities, the Eisenhower team of administrators, medical and architectural experts, and local philanthropists, have recently supported construction of the 240-bed Walter and Lenore Annenberg Pavilion.

In addition to inspiring medical innovations, Eisenhower Medical Center has managed, even in uneasy financial times, to “end its fiscal year in the black,” according to Michael Landes, President of the Eisenhower Medical Center Foundation. “This is a testament to the support we receive philanthropically from the great community of Rancho Mirage and the valley as a whole. In addition, Eisenhower has invested its portfolio in a relatively conservative manner, so that all monies raised from the community actually increased in value in 2008.”

While financial good health may seem more unlikely than physical good health this year, the robust trend in the medical industry is neither unusual nor unforeseen. “Medical health services represent a real potential growth area for the valley,” explains Curt Watts, Economic Development Director for the city. “The industry addresses the healthcare needs of residents, but it also helps diversify the local economy and provide higher-paying job opportunities for everyone.”

“Even in economically slow times, health services are necessary,” Pratt adds. “People may cut back in other areas, but they don’t curtail their healthcare expenditures. Employment, growth, and opportunity, as well as medical advances, continue to surge in this area. And that positive energy reverberates.”

Enter the celebrity. Or the television star. Or the medical maverick — or all three. Not only is Dr. Andrew Ordon a highly acclaimed and sought-after surgeon in his New York, Beverly Hills, and Rancho Mirage Institutes of Plastic Surgery, but also he’s a specialist on ABC’s Emmy-nominated informational program, The Doctors.

Since debuting in September 2008, The Doctors has developed an enormous global following. The series has become the most popular television show among Middle Eastern countries, and its success brings the City of Rancho Mirage to the attention of millions of viewers every week.

Ordon has performed quite a few eye lifts and tummy tucks along the way. He’s arguably most proud, however, of the nonprofit organization recently inaugurated with medical colleagues: the Surgical Friends Foundation (www.surgicalfriends.org). Their mission is to provide reconstructive surgery and improved access to medical care for millions of people in the United States and beyond who live compromised and painful lives because of physical deformity.

“Our training is so extensive,” Ordon says. “The more complex cases — the cleft palates, burn scars, and other unusual defects — really present us with an opportunity to utilize our skills and to help people feel better about themselves and their lives. That’s a tremendous reward, and this is a great passion for us as doctors.”

Dr. Ordon has practiced globally, and yet he speaks with passion about Rancho Mirage. “I love the patients, who are more relaxed and mellow, and that reflects the tranquility of the environment. I love my staff, the office, and the hassle-free nature of our activities. There’s a unique history here, and you can feel it especially when you look down on the valley from the hills. It’s a very special place.”

Dr. Deepak Chopra has said that, in spite of miraculous machinery and developments in technology, the practice of medicine still comes down to something very basic: an honest encounter between the patient and the physician. Drs. Lisa Lindley and Jeralyn Brossfield practice that kind of simple, relational medicine at their Rancho Mirage Women’s Health Center.

“We believe that exceptional medical care takes time and candid conversation to help you live your life to the fullest in excellent health. Our practice revisits the era when doctors truly listened to their patients. This allows us to create enduring doctor-patient relationships, which result in a personalized approach to better health.”

Not only are women’s health concerns unique, but also the integrated approach to medicine practiced at Rancho Mirage Women’s Health is distinctive and definitive. The relationship-based philosophy offered by doctors like Lindley and Brossfield represents more than anything the symbiotic nature of our lives. In Rancho Mirage, the analogy grows even further, to represent an exhilarating synergy between the community and a corridor of world-class caregivers. It’s a relationship that has fostered an oasis of good health and financial security that dazzles amid the rugged beauty of the desert.

The magnetic presence of Eisenhower Medical Center has drawn a multitude of medical specialists from all fields, who practice medicine and pursue rigorous research in and around the Eisenhower campus. The Weil Institute of Critical Care Medicine, for example, is recognized as a comprehensive international center of medical and biochemical engineering research.

Other offerings in and around Eisenhower include the Doheny Eye Center, Rancho Mirage Hyperbarics, and Optimal Wellness Naturopathic Clinic. Numerous physicians pursue private practice, and the Eisenhower Imaging Center hovers on the cutting edge of medical technology.

Two related developments have revolutionized the practice of medicine in Rancho Mirage. First, the correlation between positive medical results and successful real estate ventures is remarkably rewarding. The advent of doctor- or group-owned condominium-style offices has attracted physicians who would rather invest their earnings in property than throw it into rental costs. This element of ownership in turn instills physicians, office staff, and, most importantly, patients with a sense of permanence in an ever-changing world.

Secondly, the city and local businesses have joined forces in a consolidated effort to promote Rancho Mirage as a premier destination for medical events, conventions, seminars, etc.

Michael Macleod, Director of Sales and Marketing for The Westin Mission Hills Resort & Spa belongs to an enlightened team of civic and resort leaders who participate in the Medical Meeting Initiative.

“More than a year ago, the City’s Tourism Advisory Committee identified medical meetings as a great opportunity for Rancho Mirage,” Macleod says. “Even in the throes of economic uncertainty, the infrastructure for medical-related meetings remains solid and stable. Research and healthcare continue; and our partnership with Eisenhower and other resorts, restaurants, etc., helps to keep the medical, resident, and visitor communities happy and healthy.”

Macleod adds that the working relationship between local businesses and city employees and elected officials has been tremendous — charged with energy, vision, a sense of community, and enjoyment. He foresees continuing growth in the partnership that is effective in attracting corporate and association meetings and growing awareness that Rancho Mirage leads in 21st century medical services.