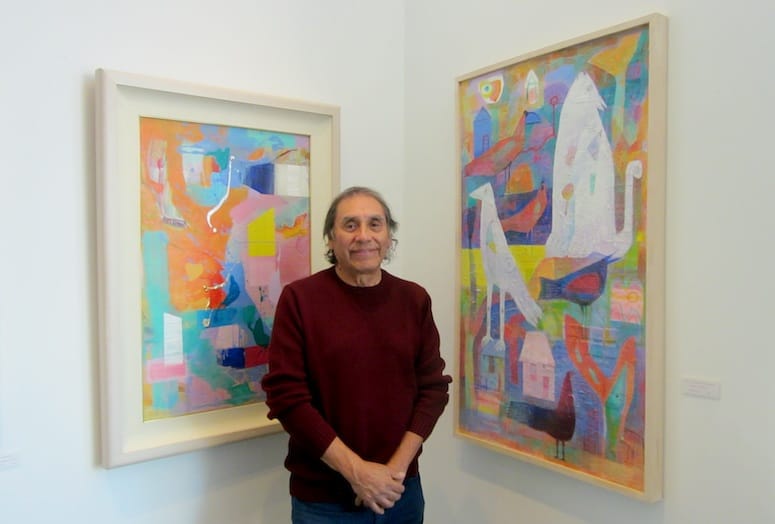 Mario Cespedes left Bolivia as a teenager to ink out a living in Sao Paolo, Brazil, selling his paintings on Sundays in the park.

Sometimes, the then 15 year old would sell a large painting for $100 to an American tourist, while other days he would go home empty-handed.

Today, he lives a world away in La Quinta, preparing for the 13th annual Rancho Mirage Art Affaire, Nov. 9-10, at Whitewater Park.

Cespedes, along with Mia Luzajic and Marley Wong, were selected to be part of a three-week artist-in-residence program at a temporary art gallery at The River in Rancho Mirage.

This is the first year the Art Affaire has hosted an artist-in-residence.

“It’s worked out really well,” said Michael Schlange, an events specialist for the City of Rancho Mirage. “We wanted to generate excitement in the weeks leading up to the festival.”

William Shinsky, executive director of the Coachella Valley Art Center, was part of the selection process. “We picked them on their quality of work, variety and their ability to participate,” Shinsky says.

The Art Affaire Gallery is open to the public from 3-8 p.m. daily. Anyone can walk in and see the artists at work.

Several artists told Shinsky that having a separate gallery space before the event was the best thing ever.

“It gives lesser-known artists like Mia the chance to showcase their work,” he says.

Mia Luzajic (pictured right) earned her masters in printmaking from the University of Belgrade, and has worked as a graphic designer of Serbian postage stamps. With her easel and large linotype-printing machine, there wasn’t much room in her Belgrade apartment to create.

She has exhibited internationally, including group shows in Turkey, Peru, Mexico and Germany.  She now lives in Rancho Mirage with her husband (also from Belgrade).

The three artists have taken a week each to demonstrate their work. Luzajic, who creates colorful Mediterranean-inspired landscapes, was first, and spent time drawing by the window.

Cespedes will be next, and plans to set up his easel in the middle of the room. At age 68, he’s beyond being shy about his work.

Reflections of the Rainforest

Cespedes has also exhibited internationally, including Brazil, France, Germany and NYC. The Amazon Rainforest inspires many of his mixed-media paintings, where he combines animals with native mythology.

He applies layers of translucent acrylic gels on canvases that have been pre-treated with texture. Some of the animals overshadow the humans. In “Celebration,” Cespedes tells the story about a boy who is tasked to find a new place for his tribe. Since the boy relies on the bird to help him, it is much larger on the canvas.

Besides depicting the beauty of the Rainforest, Cespedes also uses his paintings to battle “tricky politicians, pollution and deforestation.” Cespedes still maintains a studio in Manaus, a fishing village in the Brazilian Rainforest.

“There’s no TV there, so parents tell stories to their children,” Cespedes says. “Somehow these stories are transported into my paintings.”