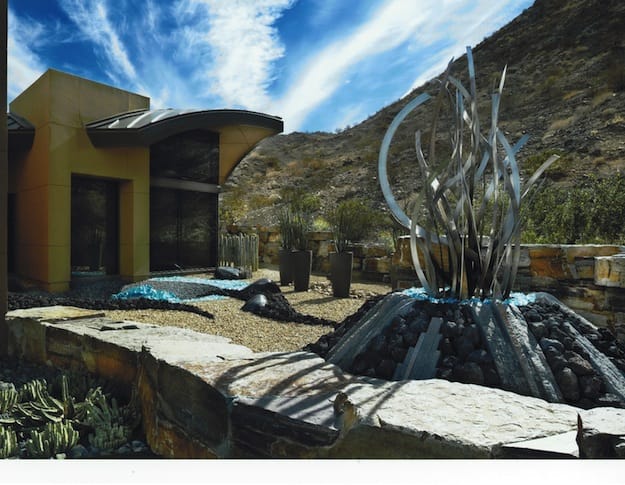 Put Scott Sohn and Wayne Connor together, and look what happens.

Sohn, of Sohnco Landscape, Inc. in Rancho Mirage, and Connor, of Wayne C. Connor and Associates in Palm Desert, have collaborated on another award-winning landscape design.

Sohn has been recognized for excellence in landscaping with the Stuart J. Sperber Memorial Sweepstakes Award during the recent 2012 California Landscape Contractors Association (CLCA) convention in Loews Coronado, Calif. Sohn interpreted the design concepts of Connor, a landscape architect, into the award-winning project at Skyridge Estate in Rancho Mirage.

The two men have collaborated for 25 years, developing more than 100 projects together. Connor is also responsible for the design work of Sohn’s two other CLCA “Best of Show” awards.

Sohn’s design features strategic placement of sapphire glass and lava rock flowing amongst elements of fire; creating a visual fire and ice garden; a nine-foot stalactite standing vertically on a rotating base, and a traditional Japanese Zen garden overlooking the desert basin.